The 84-year-old chairwoman emeritus of Kalipunan ng Damayang Mahihirap is a tireless fighter, an inspiration to the poor

MANILA – Hundreds of urban poor, women, workers, youth and other sectors gathered to honor Carmen Deunida, October 11 at the College of Social Work and Community Development at the University of the Philippines in Diliman.

The tribute began with the showing of the documentary film “Nanay Mameng” by Kodao Productions and Adjani Arumpac. Many were teary-eyed after watching the film depicting Nanay Mameng’s life story.

Nathalie Verceles of the UP Department of Women and Development Studies said it is but apt to give tribute to Nanay Mameng at Bulwagang Tandang Sora. Verceles said that like Tandang Sora or Melchora Aquino, the Grand Woman of the Philippine Revolution, Nanay Mameng continues to fight for social justice despite her old age.

Voice of the exploited

Gert Libang, deputy secretary general of Gabriela, told Nanay Mameng who was sitting at the front row, that her voice is her most powerful weapon.

In the video, Nanay Mameng says she should not be declared a hero because she has not taken up arms. 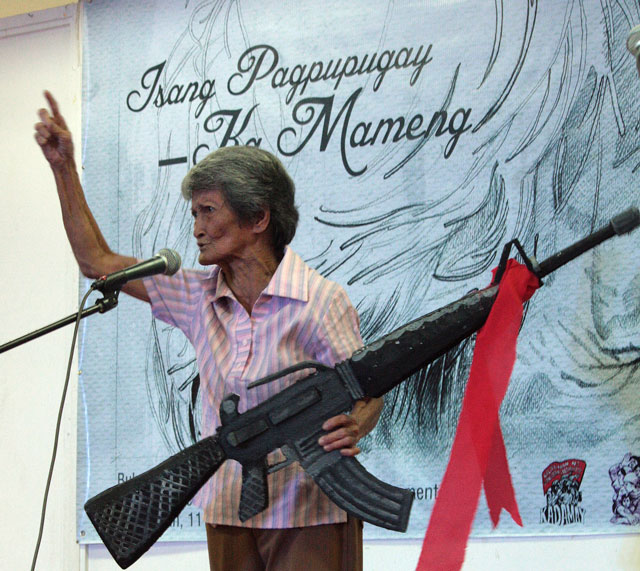 “Your voice reflects the real situation of the poor,” Libang said. “Your heroism lies in your giving inspiration to the poor.”

Libang recalled the experience shared by Nanay Mameng in a forum on violence against women (VAW) some years ago.

“When you told your parents how your husband was beating you, you were told to get up from where you fell off.,” Libang said, looking at Nanay Mameng. “When you told your fellow Catholic devotees that you wanted to divorce your husband, they said it is against the will of God. When you were black and blue after the beating and you asked the police to arrest and detain your husband, the policemen told you they would not like to meddle in family affairs.”

Nanay Mameng nodded. “When you finally joined Samakana, you said you had mustered the strength to get out of a violent relationship.”

“During rallies, the policemen would intently listen to your speech and they would be the first to clap,” Libang said.

Gloria Arellano, vice president of Kadamay, said Nanay Mameng is full of humor. “She would always challenge those in Malacañang to a fist fight.”

Arellano said even the rich people of Makati were amazed at the fiery speeches of Nanay Mameng. “She is fearless in her criticisms,” Arellano said.

“She is incomparable,” Arellano said. “She is the big voice of Kadamay.”

Dubbed as the junior of Nanay Mameng, Rjei Manalo, secretary general of Gabriela-Southern Tagalog, said she is not worthy of the title.

The young activist expressed her admiration to the old woman, even admitting how she has been aching to write down Nanay’s Mameng’s quotable quotes and how she once asked to have a photograph taken with Nanay Mameng.

“In the video, you said you fear that not one among your grandchildren would follow your steps,” Manalo said, speaking to her idol. She then asked every young person in the audience to stand up. “Do not be afraid. We want to have you longer but if you must go, we are here to continue what you have started.”

In response, Nanay Mameng said: “I will never be gone for as long as I have strength, so long as blood runs through my veins. I will only stop if I am already inside a coffin.”

Then Nanay Mameng said: “If someone would teach me how to fire a gun, I would aim it at those who are exploiting the people.”

A toy armalite was handed to Nanay Mameng, which she readily held.

The audience roared with laughter while giving the resounding applause for the tireless fighter.