MANILA – A day before the first death anniversary of Fr. Fausto “Pops” Tentorio, Justice Secretary Leila de Lima told the United Nations Human Rights Committee in Geneva, Switzerland that the missionary’s death “has not been validated as an extrajudicial killing.”

De Lima said the police are still investigating the case and that there are other angles being looked into. She headed the 26-member Philippine delegation to the 106th session of the UN Human Rights Committee. The UN committee conducted a review on the compliance of the Philippines to the International Convention on Civil and Political Rights (ICCPR).

De Lima’s statement came as a surprise to organizations calling for justice for Tentorio who was slain by two unidentified men on October 17 last year in Arakan Valley, North Cotabato.

“It is clear that the killing of Fr. Pops was politically motivated,” Sr.M. Francis Añover, national coordinator of the Rural Missionaries of the Philippines (RMP) said in an interview with Bulatlat.com during the commemoration of Tentorio’s first death anniversary in Manila. Tentorio served as a board member of RMP’s chapter in Davao.

With such statement, Añover said the “prospect for justice is bleak.” 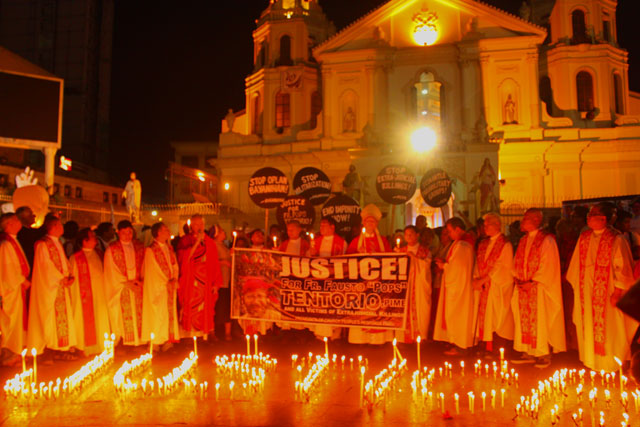 Karapatan secretary general Cristina Palabay said a new witness came forward in April implicating members of Alamara, a paramilitary group linked with the Armed Forces of the Philippines (AFP), to the murder.

The Justice for Fr. Fausto “Pops” Tentorio Movement (JPM) deemed that ““there are powerful and influential people blocking the search for justice.”

Wearing tubao on their heads, members of the Promotion of Church People’s Response (PCPR), Katribu and other groups marched from Liwasang Bonifacio to Plaza Miranda to demand justice for Tentorio.

Fr. Giovanni Re, head of PIME in the Philippines, said that similar activities were also being held in Arakan Valley, Davao City and Kidapawan City. A mass was also celebrated in Italy.

In his homily during the Mass at the Minor Basilica of the Black Nazarene, popularly known as Quiapo Church, Auxiliary Bishop of Manila Broderick Pabillo, said in Filipino, “As we commemorate the death of Fr. Tentorio, let us call on the government to put an end to extrajudicial killings.”

Pabillo, also head of the National Secretariat for Social Action, Justice and Peace (Nassa) of the Catholic Bishops Conference of the Philippines, said that Tentorio’s murder is a case of extrajudicial killing. “It is a killing not sanctioned by law,” Pabillio said.

Pabillo said that after Tentorio’s death, many more farmers, indigenous peoples, workers in Mindanao and elsewhere have been victims of extrajudicial killings. “Even under this administration, unjust things still happen,” he said.

According to Pia Malayao of Katribu partylist, of the 114 victims of extrajudicial killings under the Aquino administration, 25 percent of the victims came from indigenous peoples sector.

“What wrong did Fr. Pops do?” Pabillo said. “He was a missionary who had been in Mindanao for more than 30 years, helping the indigenous peoples, giving them education, organizing them.” 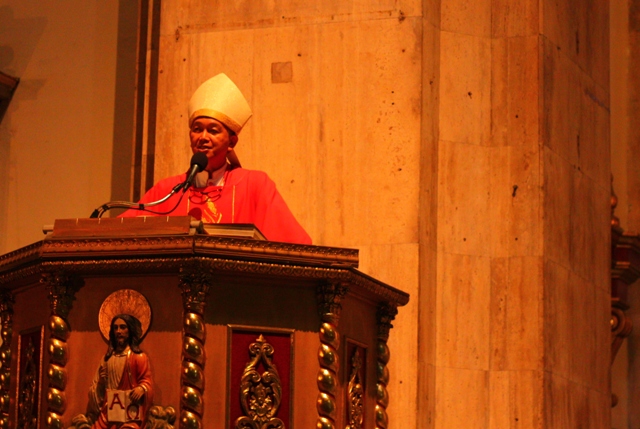 Pabillo said what happened to Tentorio was such “a shame” for the Philippines.

“Why can’t the government resolve this case?” Pabillo asked. “In almost all cases of extrajudicial killings, the perpetrators have not been prosecuted.”

“That is why there is a culture of impunity. No one is being held responsible, they [perpetrators] are emboldened to commit such crimes,” he said.

Pabillo said it could only mean two things. “Either the government is weak and inutile or government agencies are involved in these incidents.”

The Catholic bishop said some people in government are involved in grabbing the land of small people to give way to logging, plantations and mining. “The farmers and indigenous peoples have the right to land,” Pabillo said.

Pabillo said the government must use its power, utilize its machinery to resolve cases of extrajudicial killings. 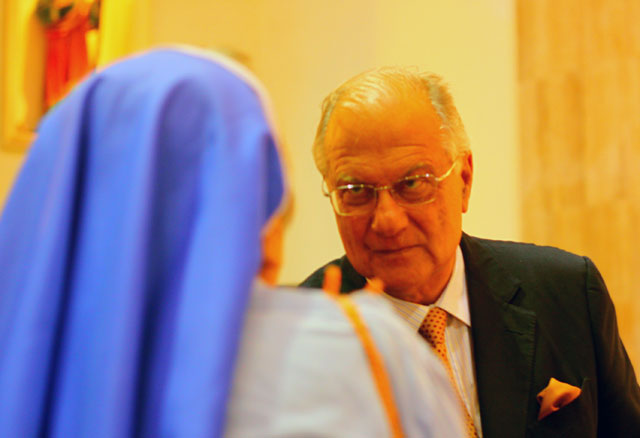 Italian ambassador Luca Fornari thanks one of the nuns who came to the Mass for Fr. Fausto Tentorio.(Photo by Ronalyn V. Olea/ bulatlat.com)

“We are here today because we do not want that the case will be forgotten,” Fornari said.

“What makes us so indignant is not the crime alone but the continuing injustice and impunity,” the diplomat added.

In Kidapawan City, more than 3,000 Lumads joined the protest.

In a statement, the PCPR said that one year after the killing of Tentorio, the atrocities and injustices committed against the indigenous peoples, which were witnessed by Tentorio continue.

The PCRP reiterated its call for the disbanding of all paramilitary groups and the junking of Aquino’s counterinsurgency program Oplan Bayanihan.

After the mass, Pabillo, Re and Fornari led the lighting of 365 candles at the Plaza Miranda.