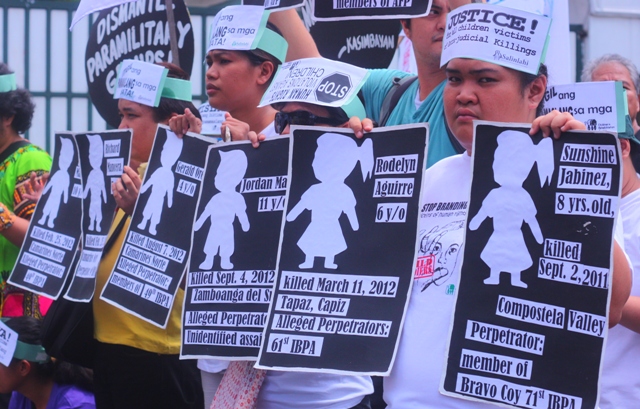 MANILA – Enraged over the massacre of an indigenous peoples family in Tampakan, South Cotabato, indigenous peoples, environmental advocates and human rights workers held a protest in front of the Department of National Defense (DND) at Camp Crame, October20.

According to an urgent action alert released by Karapatan, soldiers of the 27th Infantry Battalion of the Philippine Army went to the house of Dagil Capion at Fayahlob, Sitio Datal-Alyong , Danlag village, Tampakan town, Oct. 19. The soldiers under the command of Lt. Col Noel Alexis Bravo strafed the house. Daguil’s wife Juvy, who was two months pregnant, and their two sons Jorge, 13 and Jan-jan, seven years old, were killed. Their five-year-old daughter Vicky was wounded.

After the shooting, the soldiers brought the bodies of Juvy and her sons outside the house to compel Daguil, leader of the Blaan tribe who was vocal against large-scale mining, to surrender. After eight hours, the soldiers finally allowed the relatives to attend to the remains. 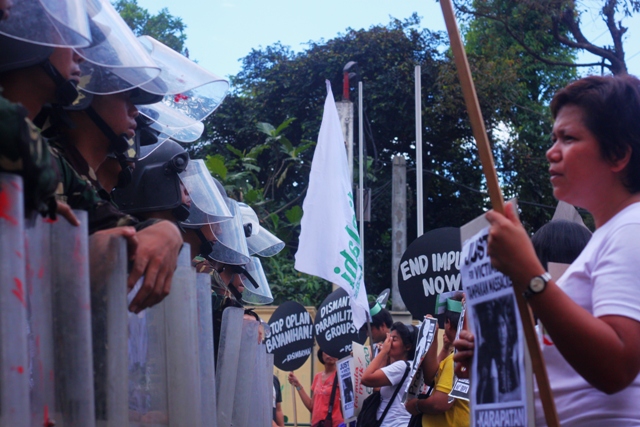 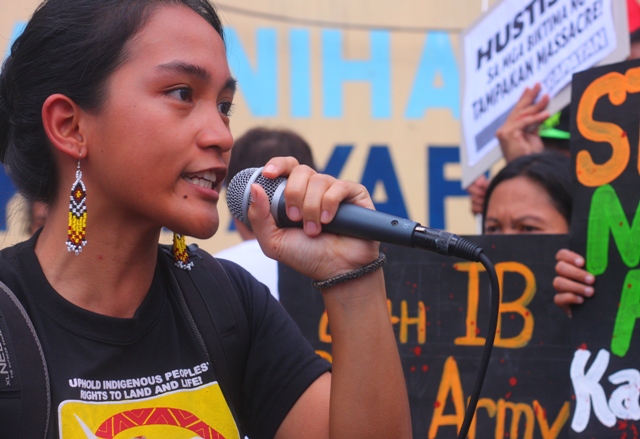 Juvy was a member of Kalgad, a local Lumad organization that has been opposing the large-scale mining of Xstrata’s Sagittarius Mines Inc. (SMI).

SMI is touted to be the biggest mining investor in the country with U$5.9 billion investment largely in Tampakan, South Cotabato. The SMI is owned by the Australia-based Xstrata Copper, believed to the fourth largest global copper producer.

“The massacre of the Capion family is a clear attempt at violently subduing opponents of the Tampakan mining project,” Clemente Bautista, national coordinator of Kalikasan People’s Netwrok for the Environment (PNE), said. “Instead of addressing the ecological, economic and social impacts of foreign large-scale miners, the Aquino government chose to simply silence the critics that have exposed and opposed these crimes to the environment.”

A relative of the victims, Robinas Poblador, 42, who joined the protest at the DND, told Bulatlat.com that the Capion family had been threatened by the military due to their opposition to mining.

Poblador, whose father is a second-degree cousin of Daguil, recalled that Juvy told her sometime in July that soldiers under the 3rd Infantry Division of the Philippine Army served as escorts of Xstrata-SMI personnel. 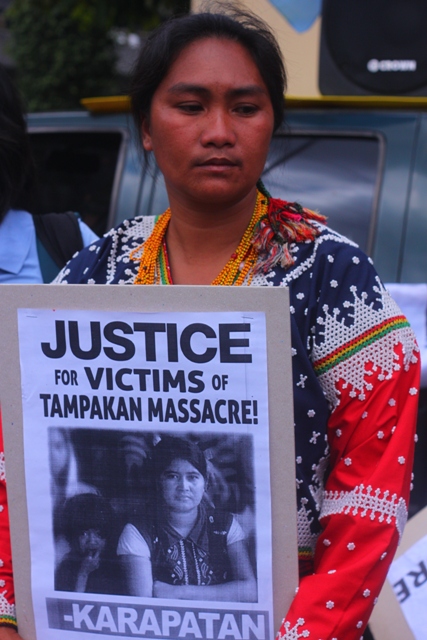 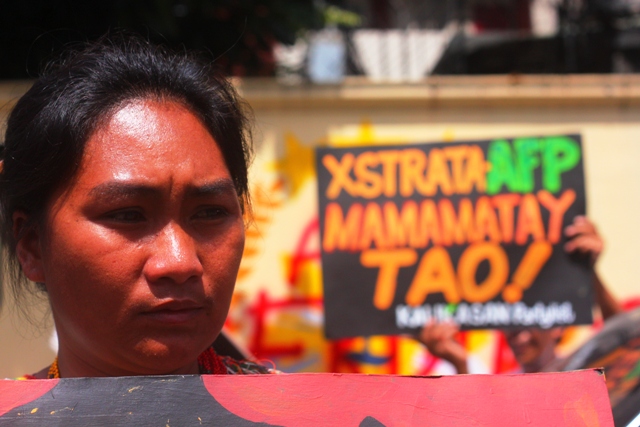 Piya Macliing Malayao, spokeswoman of Kalipunan ng mga Katutubong Mamamayan ng Pilipinas (Kamp) said, “This act of brutality against the most vulnerable sector, indigenous women and children reflects the mindset of the Aquino administration that allows this kind of violence to persist and go unpunished.” “It is also shows how the State violates the people’s rights in favor of big business, especially large-scale and foreign-owned mining.”

Meanwhile, Reina Requioma, spokeswoman of children’s rights advocacy group Salinlahi belied claims by the 27th IBPA that what happened was a legitimate encounter between the soldiers and Daguil.

“The massacre of the Capion family is yet another proof that there is no substantive change even after the proud pronouncements of the AFP’s purported campaign promoting respect for human rights, including safeguarding the rights of children,” Requioma said. “The AFP’s claim remains futile and imaginary, a mere rhetoric to win the hearts and minds of the Filipino people while violators remain unpunished.”

The Children’s Rehabilitation Center also raised alarm on the increasing number of children victims as a result of military combat operations. The group said that 14 children have been victims of extrajudicial killings under the Aquino administration.

Based on the monitoring of the Task Force-Justice for Environment Defenders, the Capions are the 45th to 47th anti-mining victims of extrajudicial killings since 2001. Under the Aquino administration, a total of 24 environmental advocates have been killed, of which 18 were involved in the struggle against destructive mining plunder.

The groups called for justice for the Capion family.

They also demanded the permanent cancellation of the Tampakan project and other mining operations with track records of human rights violations.