Where will the poor go once government hospitals are privatized through outright sale, corporatization, or public-private partnerships?

MANILA – Eduardo Basas, 58, has been traveling from his province in Samar to the Philippine Orthopedic Center (POC) in Banaue in Quezon City since 1993, afterhe was hit by a 10-wheeler truck in Borac, Eastern Samar.He is accompanied by his wife Merly, 51. The POC is the only government hospital in the country that mainly caters to patients with orthopedic and neuromuscular conditions.

Eduardo and Merly joined the hundreds of patients and health workers who protested, October 25, against the planned sale of the said hospital. They were drenched by the rain but that did not deter them from pushing through with the protest action.

The October 25 protest action was not confined to the POC. Health workers from five government hospitalsin the National Capital Region – the Philippine Orthopedic Center, National Center for Mental Health (NCMH), Philippine Heart Center (PHC), Jose R. Reyes Memorial Medical Center (JRRMMC), and Philippine General Hospital (PGH) – as well as those in Davao City and the Baguio General Hospital simultaneously held protest actions against the privatization of government hospitals during their lunch break from 12 noon to 1 p.m..

According Sean Velchez, president of the POC employees union, the health workers did not abandontheir posts because they went out during their break time. He also said that some health workers even asked for a change in their shifts just to attend the protest action.

POC for bidding in November

Velchez said that on Sept. 18 of this year, the National Economic and Development Authority (Neda) had approved the P5.69 billion ($137 million) contract for the “modernization” of the POC. The bidding will be held on November this year and the planned construction will be on 2013.

According to an article, a new orthopedic hospital will be constructed in the National Kidney and Transplant Institute (NKTI) Complex in East Avenue, Quezon City. About 80 to 90 percent of indigent patients will be displaced if the POC’s sale will push through. According to news reports, business tycoon Manny V. Pangilinan is the buyer of POC. Pangilinan has also invested in the Makati Medical Center and sits as chairman of the Makati Medical Center Foundation; he also signed a memorandum of agreement with the Rizal Medical Center for the hospital’s privatization. 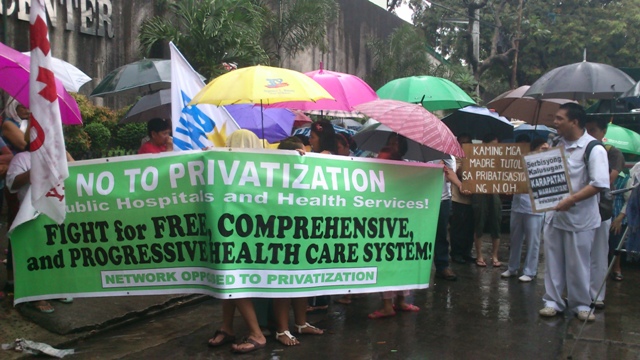 The POC in Banawe, according to Velchez, will be converted intoa warehouse where materials for prosthesis will be sold.

“We will not let this hospital be sold. Where else will we go? I plead and crawl just to find the money to buy medicines,” said Merly who is also suffering from depression. She said they have spent all their hard-earned savings for her husband’s treatment. Eduardo is suffering from chronic Osteomyelitis, a bone infection caused by bacteria or other germs. He also has stage three bone cancer, suffered a stroke three times and has undergone 10 operations since May 6 this year. A metal was inserted inside his left leg in 1993. Now he could not put his leg down due to the metal and this caused an infection.

“The poor patients will definitely suffer if the sale of the orthopedic center will push through because we all know that once private investors come into the picture, their only purpose is to earn profits. This is a clear service for profit only,” Velchez said before the patients and health workers who protested against the privatization of government hospitals.

Eduardo and Merly are staying in the seminar house of the Missionary Sisters of the Immaculate Heart of Mary also in Quezon City. Merly does laundry work for the hospital to earn some money. Unfortunately, she was told that her services are no longer needed. Now her last resort is to seek help from politicians, POC’s social services and some relatives.
Velchez said the 2011 Commission on Audit (COA) report shows that last 2010, POC had 147,679 out patients, 42, 179 emergency room patients and 6,579 in-patients. “They will eased out by paying patients once the POC is privatized,” Velchez said.

The POC is also the major referral center for spinal injuries in the country and the only hospital that offers rehabilitation services with minimal fees. 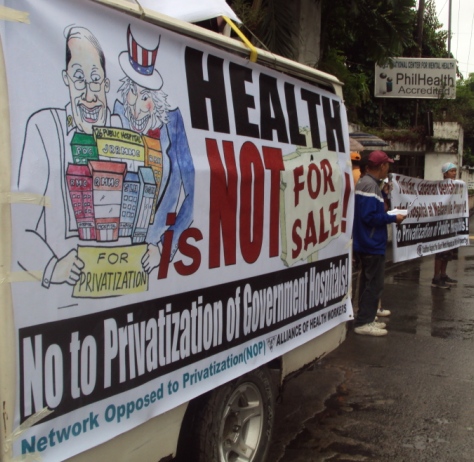 Health workers’ protest action in National Center for Mental Health which is also up for bidding this year.(Photo courtesy of Alliance of Health Workers / Bulatlat.com)

When we talk about health, we are talking about people’s lives and this is why health groups, as well as other cause oriented groups, are calling for the support of the people to pressure the government to withdraw its plans to privatize public hospitals and health services.

“Six out of 10 sick people die without being able to see a doctor. When public hospitals are privatized, more and more sick people, especially those who are poor, will just die from illnesses that are commonly treatable,” Velchez said.

Laboratory fees would become too expensive and inaccessible for a poor patient like Eduardo. According to JosselEbesate, president of Alliance for Health Workers (AHW), rates for services especially in corporatized hospitals are expensive. “The fee for a chest x-ray at San Lazaro Hospitalis P250 ($6), complete blood count is P200 ($4.87), and fecalysis is P110 ($2.6),while the NKTI charges P500 ($12.08)for a chest x-ray, P380 ($9.18) for a complete blood count, and P300 ($7.25) for fecalysis. The difference in rates shows how corporatization will make services prohibitive to poor patients. San Lazaro is a Department of Health retained hospital and NKTI is a government owned and controlled corporation (GOCC),” Ebesate said. He added that San Lazaro is among the 26 hospitals for corporatization and among the three hospitals up for Public-Private Partnership.

Bonifacio P. Carmona, Jr., president of Philippine Heart Center Employees Association (PHCEA) said, “Corporatization of public hospitals would result in inaccessible health services, untreated terminal diseases, and even death.” He added that corporatization does not only increase service fees, it will also result in long queues forindigent patients in the out-patient department. “Delaying treatment is a life-threatening situation,” Carmona said.

Corporatization of public hospitals would also result to crippling debts, due to the decreasing national government subsidy for these hospitals.

According to Carmona, as of August 2011, the Philippine Heart Center (PHC) has acquired debts amounting to P800 million ($19.33 million) to construction companies and suppliers of medical goods. He said the hospital could not afford to have the catheterization laboratory repaired and could not buy additional machines, such as echocardiography machines, a machine that is used in diagnosing heart diseases. The PHC also has P46 million ($1.11 million) unpaid taxes to the Quezon City government.

According to the Alliance of Health Workers, these tertiary hospitals are the only hospitals in the region that are capable of providing tertiary level health care.

Health workers strongly oppose the said bills because it endangers not only the lives of poor sick people but also the security of tenure of government health workers. They decried the threat of massive streamlining once government hospitals are privatized. Once privatized, the hospital’s operation and maintenance will be outsourced and contractualized. Examples of outsourced services are: janitorial, dietary, and security services.

Meanwhile, private health service providers have already encroached in public hospitals. At the JRRMMC, the radiology services is provided by Himex Corporation, while at theTondo Medical Center, laboratory procedures are provided by HiPrecision laboratory. “These services were provided for free before the operation of these privately-owned health service providers,” Ebsate said.

The Department of Health’s RN Heals project was cited as an example of the massive contractualization in public health institutions. Nurses who are employed under this program receive a meager P8,000 ($193) monthly allowance and an additional P2,000 ($48) from the employer, which is either a public hospital or a local government unit. This is way below whatplantilla nurses receive, which is at least P17,000 ($410) plus other benefits.

The Health Department’s RN Heals project or the Registered Nurses for Health Enhancement and Local Service was conceived in 2010 as a response to the glut in nursing graduates in the country, which was brought about by the decision of the US and UK governments to stop importing nurses. It is a continuation and an enhancement of the NARS project in 2009, wherein nurses were hired for only six months.

“The President admitted that six out of 10 Filipinos die without seeing a doctor. Then why does he have to privatize public hospitals that provide free health services to the poor?” said Velchez. He asserted that the people will not benefit from the “modernization” of public hospitals. It will, instead, be a burden to the Filipino people because of the increased fees.

“We see how patients in the Philippine Orthopedic Center struggle every day, finding ways to buy medicines for their loved ones. Where else would patients go if hospitals like the POC will be privatized? Would the government just let them die?” Velchez said.