‘Don’t be a ghost,’ parents of abducted UP students tell Palparan

MANILA – The parents of the two missing students of the University of the Philippines (UP) are enraged over retired Gen. Jovito Palparan’s recent legal move.

Palparan and co-accused M/Sgt. Rizal Hilario recently filed a petition before the Court of Appeals seeking to stop the court proceedings in the Bulacan Regional Trial Court Branch 1.

In their 14-page petition, Palparan and Hilario, two of the four suspects in the kidnapping and serious illegal detention of Karen Empeño and Sherlyn Cadapan, claimed that the court proceedings “smacks and reeks of persecution rather than prosecution.”

“Sobra siyang walang hiya,” Mrs. Concepcion Empeño, mother of Karen, told Bulatlat.com in an interview. “He is a coward who is afraid of his own ghost.”

Mrs. Erlinda Cadapan said, “Ghosts are not allowed in court.” “He should present himself in court first. How did he become a congressman if he did not know the law?”

Palparan, who served as representative of Bantay party list, and Hilario, remain at large more than ten months after the Bulacan court issued a warrant of arrest against the suspects. A P2-million reward has been put up for the capture of Palparan but authorities have yet to arrest him and Hilario. Two other suspects – Col. Felipe Anotado and Staff Sgt. Edgardo Osorio – surrendered to the authorities and are now detained at the military camp in Fort Bonifacio, Taguig City. 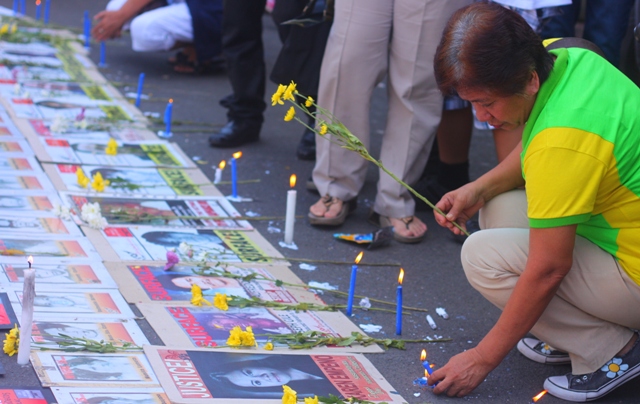 Mrs. Concepcion Empeño lights a candle for her daughter Karen at a gathering of relatives of victims of enforced disappearances, Nov. 2 at the Redemptorist Church in Baclaran.(Photo by Ronalyn V. Olea/ bulatlat.com)

“If he could write and sign a petition, why does he not face us in court?” Mrs. Empeño said. “He is guilty. If he committed no wrong, he would be ready to face us.”

Mrs. Empeño also shared her husband’s reaction on Palparan’s legal tact. “They [Palparan and Hilario] want to nullify the charges against them when they did not even give a chance for Karen and Sherlyn to be charged in court for a fair trial,” Mrs. Empeño read Mr. Oscar Empeño’s text message. “They should have been incarcerated long ago,” Mr. Empeño said in his text message.

The two UP students, along with farmer Manuel Merino, were abducted allegedly by Palparan’s men in Hagonoy, Bulacan on June 26, 2006. The three remain missing to this day. According to testimonies of witnesses in court, the two students were tortured and raped.

The lawyers of Palparan and Hilario argued that the charges of kidnapping and serious illegal detention were not the subject of the preliminary investigation conducted by the Department of Justice Panel of Prosecutors last year.

Earlier, Palparan also filed a similar petition before the Bulacan RTC but it was dismissed by Judge Teodora Gonzales, citing that “the crimes of kidnapping with serious illegal detention are deemed included and described in the joint complaint and affidavits for which they [ the accused] were investigated.”

“Palparan’s ‘new’ yet belated and recycled plea before the Court of Appeals is an obvious attempt to circumvent the denial of his earlier petition,” Edre Olalia, secretary general of the National Union of People’s Lawyers and one of the private prosecutors in the case, said in a statement. “It is an afterthought as he is clutching at the remaining thin straws of legal maneuvers that he could futilely resort to. Probably his world is getting smaller every day so he is desperately trying to preempt and delay the inevitable.”

“He must play by the rules. He cannot invoke the trial court’s jurisdiction to ask for a favorable ruling and then question it when it does not,” Olalia said. “He wants to trifle with the judicial process by remaining a fugitive.”

Olalia said Palparan “exhibits utter hypocrisy to claim due process, a basic right he is charged with having routinely denied those who remain missing.”