HINOBAAN, Negros Occidental – For years, 64-year-old Gregorio Cordova and his family have relied on farming for survival.

A tenant-farmer working on a 1.5-hectare of land near the Bacuyangan River, Cordova gets one-fourth share of the harvested palay (rice grain) and the rest goes to the landowner. Even with such meager share, he, his wife and their eight children had managed to get by.

These days, however, their difficult life has even become miserable. Since the Philex Mining Corporation started its “exploration” activities in Talacagay village in June last year, he noticed a decrease in their harvest.

“Our palay became yellowish, its growth stunted,” Cordova told members of the International Fact-Finding and Environmental Mission (IFFEM) who visited Talacagay village of this town and the neighboring Nabulao village in Sipalay. The IFFEM, which Bulatlat.com covered, was held Nov. 6 to 15 in the southern and northern parts of Negros Occidental, was aimed at documenting the impact of mining activities on the lives of farmers and fisherfolk.

Data from the Mines and Geosciences Bureau Regional Office VI revealed that Philex obtained an Exploration Permit covering more than 4,000 hectares in Sipalay and Hinoba-an. The mining company also obtained a Mineral Production Sharing Agreement (MPSA) covering villages in both towns. In 2011, the Philex publicly announced it is eyeing at resuming full-scale operations in the province. 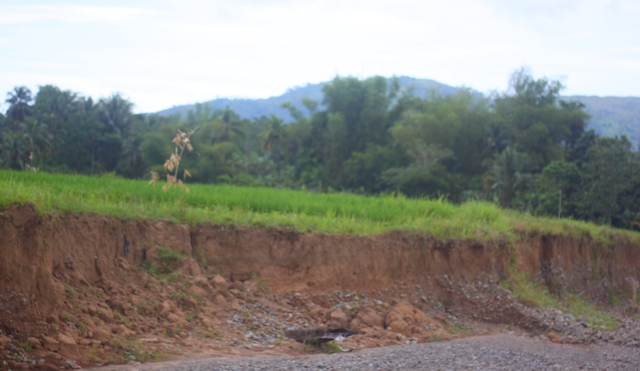 A significant portion of this farm land has been washed away. Stones from Philex’s mining activities reached the Bacungayan River.(Photo by Ronalyn V. Olea / bulatlat.com)

At this stage, the company conducted drilling operations and earth work activities such as road construction. Interviews with residents revealed that these activities have already been damaging to the people’s livelihood and the environment.

Cordova said that since last year, the farmlands in Bato subvillage became flooded. “Soon, a portion of the farmland had been inundated with mud and stones,” Cordova said.

Morita Lagtapon’s complaint was similar. Like Cordova, Magtapon, 64, is also a tenant. She and her husband work on less than half-hectare of land in another subvillage of Bungyod. A portion of the land they till had been washed away. Now, they have to do with what is left of the small piece of land.

In an interview with Bulatlat.com, Efren Fabila, a mining engineer based in Talisay City, said the stones, which covered the farmlands, were colluvial deposits from drilling operations. 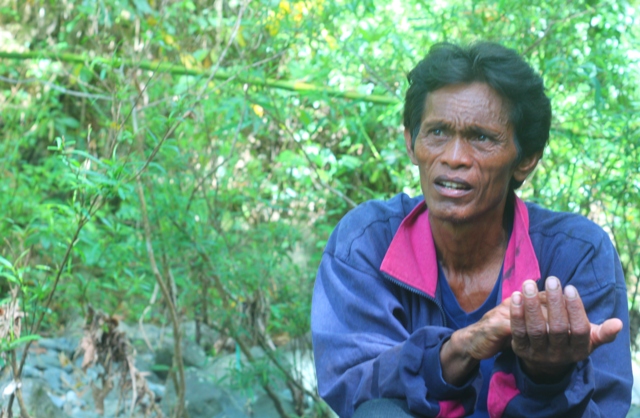 An agriculturist and biochemist who was part of the 65-member IFFEM team in South Negros also attributed the lower production output to mining activities. Amado Angeles, a professor of agriculture at the University of the Philippines-Los Banos, explained that the land near the Bacuyangan River is fertile. “Now that the river has become silted due to waste deposits from drilling operations, farmers have experienced lower production.”

Farmers also depend on the Bacuyangan River for irrigation. “If the water supply becomes even more limited, farmers would eventually lose their livelihood,” Angeles said.