You Are Here: Home → 2012 → December → 8 → DENR hand in degrading environment, human rights as dirty as the military’s – IP and green groups

DENR hand in degrading environment, human rights as dirty as the military’s – IP and green groups

MANILA — The Aquino government alternately blames the devastating landslide in Compostela Valley on illegal logging and small-scale miners. But illegal logging operations would not prosper without the connivance of the Department of Environment and Natural Resources (DENR), Rolando Florencio, chairman of Kilusang Magbubukid ng Pilipinas in the province of Compostela Valley, told Bulatlat.com.

Florencio disclosed that in fact, big politicians and the DENR are frequently in cahoots in illegal logging operations in New Bataan or elsewhere.

As for small-scale mining, which happens to be the bigger contributor to government revenues and source of employment, the government will do better to help rather than vilify and displace them, and help them make their livelihood safer, said Clemente Bautista of Kalikasan Peoples’ Network for the Environment. 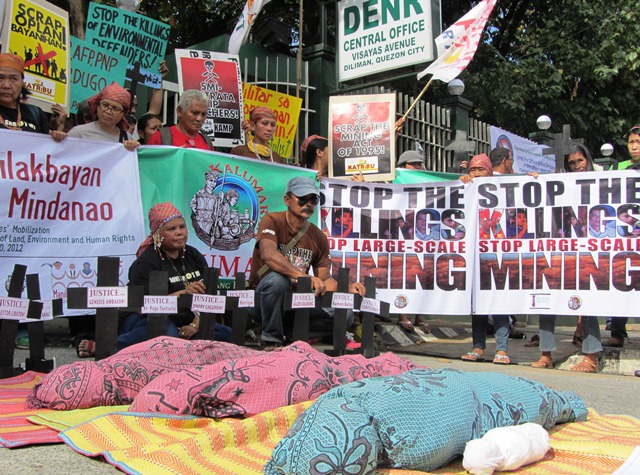 Effigies of the dead due to large-scale mining brought to DENR. (Photo by Marya Salamat / bulatlat.com)

The Aquino government is dodging attention from the bigger cause of disasters and deaths in Mindanao, delegates of indigenous peoples and green groups from Mindanao who are in the capital this week for a 10-day Lakbayan said in a protest action before the office of the DENR.

More than half of Mindanao, especially the provinces hardest hit by typhoon Pablo, have billions of dollars worth of estimated reserves of copper, gold, aluminum and iron ore, said Genasque Enriquez, a Manobo and vice-president of Katribu Partylist. This explains why Mindanao, he said in a forum, is hosting some of the biggest foreign companies and mines, from BHP Billiton, to Xstrata-SMI, Sumitomo, Anglo-American Plc., Toronto Ventures Inc., and foreign-owned or controlled plantations.

About eight of Aquino’s priority mining projects are in Mindanao, Enriquez said. 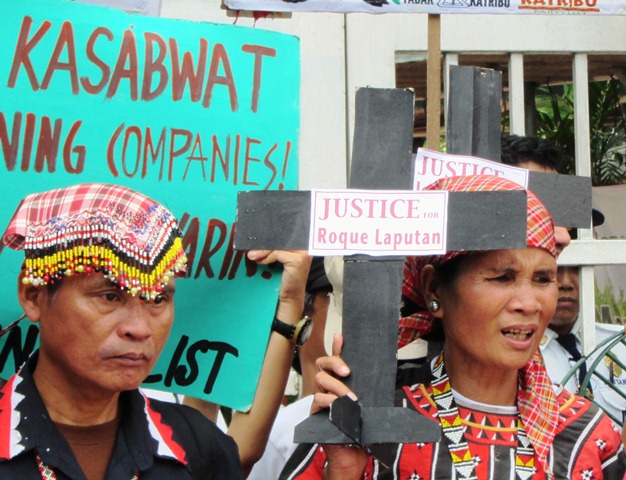 Lumad delegates of Manilakbayan condemn the DENR for taking part in degrading their environment, human rights, in a rally Dec 2012 (Photo by Marya Salamat / bulatlat.com)

“Who would not pity a mother and her children when they were killed right inside their own homes?” Clemente Bautista of Kalikasan Peoples’ Network for the Environment said during their protest outside the main office of DENR. With the delegates of Manilakbayan from Mindanao, they have brought effigies of a young Blaan family believed to be massacred by the military securing the Xstrata-SMI.

“Who would not take pity on our fellow Filipinos whose family members die, get hurt or lose their homes and livelihoods every time a typhoon visits their area?” Bautista asked.

“But despite the pleas and demands of the indigenous peoples group and green groups for the DENR to order the closure and departure of companies who are digging out our forests, extracting our minerals – leaving our environment damaged, poisoned and vulnerable to typhoons – the DENR continues to give them permits to operate,” Bautista said.

“We asked Aquino to stop the killings, instead, he sent more vigilantes, more military deployment, SCAA. Those who should have been upholding our welfare are in fact the ones attacking us,” Bautista continued. SCAA is the acronym for Special Civilian Armed Auxiliary, a paramilitary group formed and supervised by the Armed Forces of the Philippines to secure the operations of foreign mining companies.

In a statement, the labor group Kilusang Mayo Uno called for an investigation into the causes of the Pablo’s devastation, especially given the number of dead and the extent of destruction. “It should be an independent probe because the Aquino government has always sided with big mining and logging companies,” said Elmer “Bong” Labog, KMU chairman.

The labor leader said the government should no longer allow large-scale mining and logging operations to continue in Mindanao in hopes that the island will continue to be spared from typhoons.

“Weather patterns around the world are changing fast because of climate change. We cannot expect Mindanao to be typhoon-free in the coming months or years,” Labog said. He urged the public to help compel the Aquino government to heed the lessons of the destruction caused by recent typhoons. And that lesson clearly showed, he said, that “Large-scale mining and logging operations destroy the environment and endanger the lives of many Filipinos.”

But more than stopping mining particularly large-scale mining, the Aquino government should be called to task for the disaster, the Information Bureau of the Communist Party said in a statement. What makes millions of toiling people in the Philippines even “more vulnerable to ever-worsening calamities brought about by the ruthless plunder of the environment” is their acute poverty, the CPP said. And this poverty, in turn, is caused by the Aquino government’s “continued failure to address the clamor of the poor peasants and farm workers who suffer grave socio-economic conditions as a result of worsening oppression and exploitation.”

The CPP has been waging an armed revolutionary war against what it calls as succeeding US puppet governments in Malacañang. As the Aquino government continues deploying more troops to secure foreign large-scale mining permitted to operate by the DENR, some locals opposed to these incursions are taking up arms as well, in a move to defend their people and their ancestral domain. 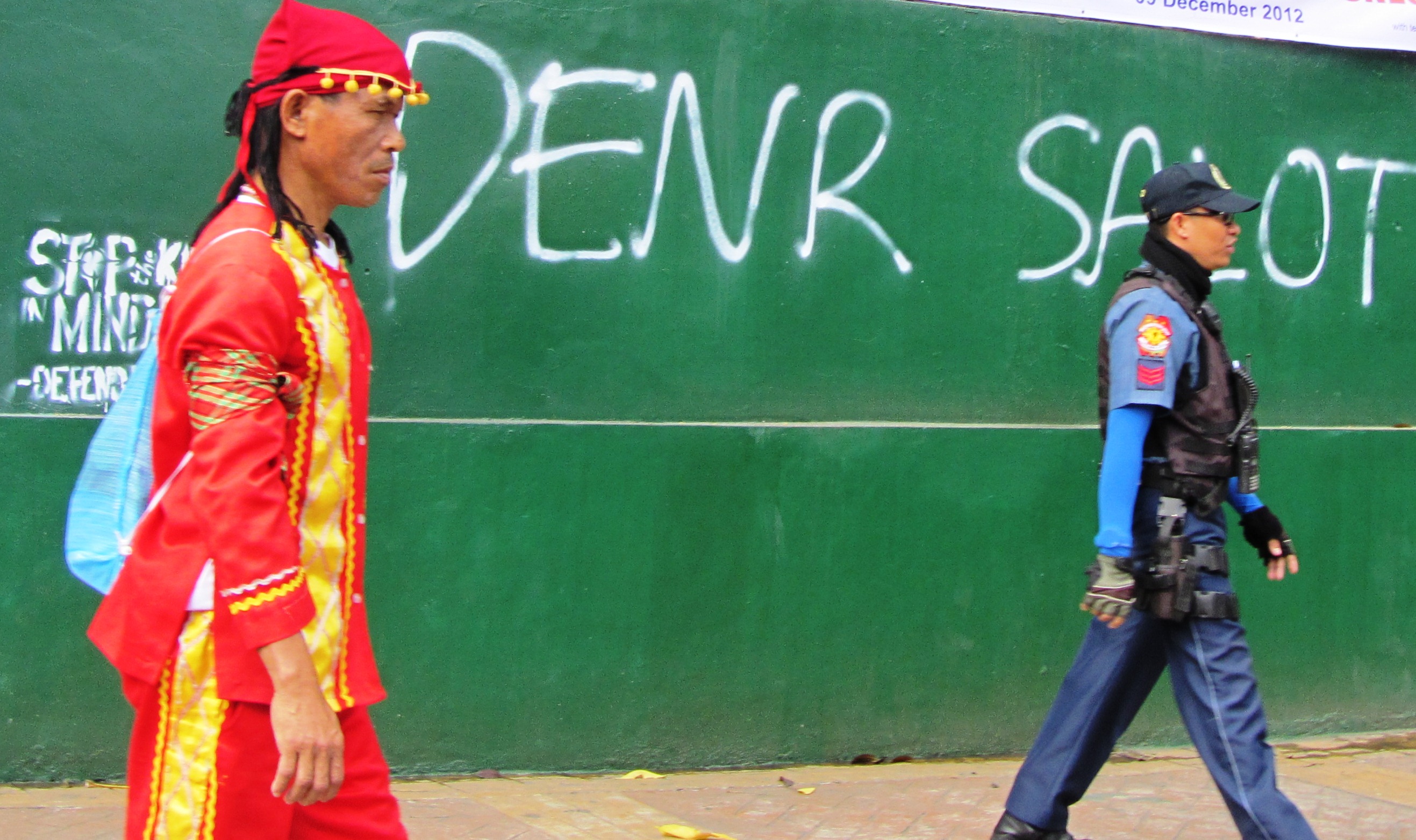 A lumad leader prepares to expose the DENR sins to people and environment in front of DENR main office (Photo by Marya Salamat / bulatlat.com)

However, the Aquino government itself seems bent on continuing with its policies and measures that encourage the rise of armed revolutionary groups. In various mining-affected sites where the communities have banded together to compel their local governments and the DENR to deny permits to mining operations, the DENR itself is helping the mining companies to overturn it, Piya Malayao of KAMP (Kalipunan ng mga Mamamayang Katutubo) said during a protest in front of the DENR.

Mining-ravaged indigenous peoples groups and farmers from Mindanao said the DENR is just as much a “butcher” as the military is in its collusion with the mining companies to repress the peoples’ resistance.