BACOLOD CITY – A pastoral worker who was nabbed inside a convent decried the seemingly Gestapo tactics employed by the Regional Intelligence Unit of the Philippine National Police when they served the arrest warrant against her in the morning of December 7.

The Gestapo is the secret police during Nazi Germany and was notorious for its terroristic methods of operations.

“They did not present any document and suddenly grabbed and hauled me down a flight of stairs into a waiting vehicle,” Aniceta Yaun Rojo told Bulatlat.com in Cadiz City where she and several others have been charged for the death of an Army lieutenant early this year.

The 49-year-old Rojo, a mother of four, was having breakfast with several other church workers inside the San Juan Bautista Parish around 8:30 a.m. in the southern Negros city of Bago when a woman who identified herself as “Juvy,” told her that some people would like to talk to her downstairs.

Rojo, who the military claims is a ranking official of the Communist Party of the Philippines (CPP) in the island, is a resident of Sum-ag village here and has been a pastoral worker with the parish after working for several non-government organizations.

Not knowing that they were policemen, Rojo said she told Juvy to let them come up to the convent.

Three more of them came and “I told them to sit down so we could talk but they did not and one of them told me that I have to answer for a crime,” she said. 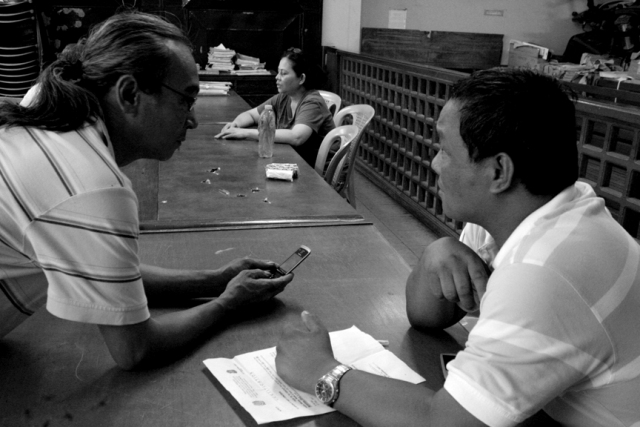 HUSBAND Rodel, left, confers with lawyer Rey Gorgonio at the sala of the Regional Trial Court Branch 60 where Aniceta and 24 others were charged for murder. (Photo by Julius Mariveles / bulatlat.com)

All of them were in plainclothes, none of them presented any identification or even the warrant itself, Rojo added.

When she asked them to wait for parish priest Rodolfo Tan, the four started to get impatient and told her that she must leave with them immediately.

“Juvy then told me that she wanted to talk to me near the stairs and, once I was there, she forced me to go down,” she said.

Rojo, who stands less than five feet, screamed for help and one of the church workers, Nilda Plomeda, grabbed her arm and engaged in a tug-of-war with the policemen.

Plomeda, however, was overpowered by the policemen who forced Rojo into a waiting vehicle and brought her to the Bago City Police Office where the RIU operatives had the arrest recorded.

She was then brought to the Cadiz City Police Office, more than two hours north of Bago City, where she was eventually informed that she was charged along with 24 others for the death of 1st Lt. Archie Polenzo.

Polenzo, an officer of the Army’s 62nd Infantry Battalion, was killed in what the military described as an ambush last March 7, 2010 by the New People’s Army at the sub-village of Aluyan in barangay Bonifacio in Cadiz City.

The NPA, however, refuted the claim and said it was an encounter initiated by the Army.

Court records showed that the charge was filed by then acting City Prosecutor Eduardo Sayson and had as witnesses Privates First Class Oliver Porten and Ray Fontanalgo who all claimed that the suspects are members of the NPA who ambushed their unit.

Among those charged are known to the local media as leaders of activist labor organizations or non-government organizations like Isidro Castillo, former regional chairman of the National Federation of Sugarworkers, a labor federation that has consistently been tagged by the Army as a front of the NPA’s political arm, the Communist Party of the Philippines.

Rojo’s family and human rights workers were led on a wild goose chase Friday as they searched for Rojo whom they thought at first was abducted.

Informed less than an hour after the incident, Rojo’s husband Rodel immediately went to the headquarters of the Bago City Police where he was at first denied a copy of the police blotter entry.

Rodel, a former church worker and visual artist, said they did not receive any subpoena related to the murder charge filed against his wife.

“We do not know a thing about this case,” he said.

The policemen and his wife had already left the Bago police station when he arrived, prompting him to seek the assistance of lawyers and human rights workers.

Bulatlat.com, informed about the incident, called Cadiz City police chief, Supt. Noel Manaay, around 10 a.m. but was told that they did not have Rojo in their custody.

It was only past 11 a.m. when Manaay confirmed to Bulatlat.com that Rojo was being “processed” at the Cadiz City Police Office and was expected to be presented to Judge Renato Muñez of the Regional Trial Court, Branch 60, where the complaint for murder was filed. 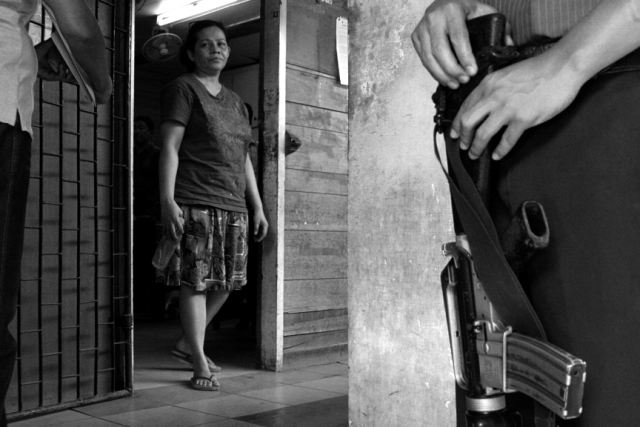 Aniceta Rojo stands at the doorway of the Regional Trial Court Branch 60 in Cadiz City as a policeman stands guard with an assault rifle. Rojo and 24 others were charged for the killing of 1Lt. Archie Polenzo who was killed in what the military described as an ambush but the New People’s Army claimed it was an encounter initiated by the Philippine Army. (Photo by Julius Mariveles / bulatlat.com)

Rodel and human rights workers rushed to the Cadiz City Police Office but were informed upon arriving there that Rojo was already brought to the City Health Office.

They failed to find Rojo at the CHO, however, but were told by health workers that she had a blood pressure of 210 over 130 when she was checked at the emergency room.

The RIU operatives, however, did not let her rest long and, after being given medicine, she was immediately brought to the RTC sala located at the nearby City Hall.

The team finally caught up with Rojo at the RTC sala where she was accompanied by four members of the RIU.

Lawyer Rey Gorgonio, whose assistance was sought by Rodel, asked the policemen why they arrested Rojo but one of them answered that they were instructed not to issue any statement.

“We were told to just refer all questions to Col. Senoron,” a male operative said, referring to RIU chief, Supt. William Senoron who could not be reached for comment.

“A lot of violations were committed,” Gorgonio said when asked about the manner by which Rojo was arrested.

He pointed out that the policemen did not present the warrant as required by law and did not even coordinate with the local police in carrying out the arrest.

Worse, they did not present any identification that they were policemen and did not even read Rojo her rights based on the Miranda doctrine.

“They just told me that I have all the rights but only when we reach Cadiz City,” she said.

The court issued a commitment order for Rojo to be detained at the Cadiz City Jail where another suspect in the same case, NGO worker Zarah Alvarez is jailed.

Fred Caña of the Alliance for the Advancement of People’s Rights said Rojo’s arrest is part of the malicious filing of charges by the Army against human rights and development workers.

“There is no other intent but to harass them and make their lives miserable,” he said.

On December 3, two organizers of Courage, a federation of government employees unions, were also arrested and charged with murder and other common crimes.

Randy Vegas and Raul Camposano were nabbed by authorities in two separate incidents in Manila and then brought to Camarines Norte Provincial Jail in Daet. They are being accused of participating in an ambush of members of the Armed Forces of the Philippines by the New People’s Army in Camarines Norte on April 29.

“Aquino’s institution of ‘judicial reforms’ for the ‘respect for human rights’ means the renewal of its efforts to churn out fabricated charges against activists, members of progressive organizations and unions, peace consultants and leaders of the revolutionary movement, and ordinary citizens,” Cristina Palabay, Karapatan secretary general, said.

Karapatan called on Aquino to withdraw all trumped-up charges against activists, peace consultants, leaders of the revolutionary movement, and ordinary individuals and release all political prisoners. The rights group has documented 467 victims of illegal arrests under the Aquino administration and 127 political prisoners arrested and detained within the same period. (with reports from Ronalyn V. Olea)