In 2012, urban poor jailed, killed for fighting for homes

MANILA – Eight months have passed since Arnel Leonor, 19, of Silverio Compound in Parañaque City, was killed during the demolition of their homes. As of this writing, no justice has been served and his mother Glenda feels it is taking too long.

Eight months, too, have passed since Vicente Tiongson, 32, was arrested and jailed. His wife Mylene Marsenes, 24, said he was about to buy food after the demolition when the police arrested him. Since then, she and her two children survive by begging from their relatives for money to buy food. Mylene asserts her husband is innocent and should thus be freed.

Mylene and Glenda met each other only after the violent attempt to demolish their homes last April 23. Yet, they have become close. Both share a different level of pain of losing a loved one. Their pain is shared by thousands of families facing threats of demolition in Metro Manila.

According to Kadamay, ten urban poor dwellers were murdered under President Benigno “Noynoy” S. Aquino III. This year alone, four were killed. These killings, the urban poor group said, are linked to their active participation in organizing their community to resist demolitions.

In a protest action at the Department of Justice five days before Christmas, urban poor and activists decried the attacks on their rights under Aquino. They urged the government to put a stop to these rights violations, saying “justice is all we want for Christmas.”

According to the yearend report of human rights group Karapatan, 129 activists were victims of extrajudicial killings under the Aquino administration. Mostly they were peasants and indigenous peoples; four came from the ranks of urban poor dwellers who were actively campaigning against threats of demolition of their homes.

The photo of bloodied Arnel Leonor lying near Sucat Road’s island went viral on the internet through social networking sites. Yet, despite his murder, justice grinds slowly for him and for his family. His mother Glenda said it is her third time to visit the DOJ since Arnel was killed. “Today I was given a telephone number where I could follow up on the case,” she said. 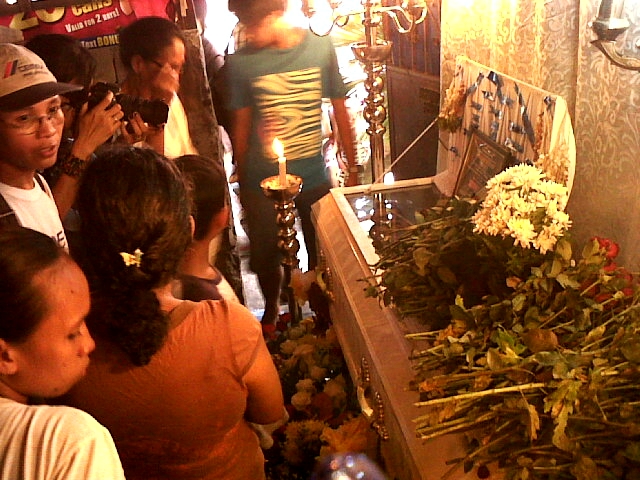 Until now, no formal charges have been filed against the police, which Glenda and her family believe to be the perpetrators of the crime. The National Bureau of Investigation has yet to release the result of their investigation. There have been initial reports coming from the police that the bullet that pierced Arnel’s head came from the ranks of the protesting residents. But Glenda and most Silverio residents do not believe it.

“I am very sad (on how slow things are going),” Glenda told Bulatlat.com in tears.

Whenever she would hear other cases of killings among the ranks of urban poor, Glenda said she feels very sad about it.

Ernesto Gulfo, an urban poor leader, was gunned down while having breakfast in front of his house in Catmon village, Malabon City, May 30. In a previous Bulatlat.com report, an unidentified man entered their junkshop at 7:10 a.m., asking for the price of copper scraps. But Gulfo was shot three times before he could answer, where two pierced his chest. He was pronounced dead on arrival at the Manila Central University Hospital.

“I could not scream. I was so shocked I could not move. I did not even have the strength to be hysterical. I kept asking myself if what I just saw was true,” his wife Divina said.

Gulfo actively campaigned against the impending demolition of homes, which would affect some 1,500 families. The demolition would supposedly give way to a government housing program through the Community Mortgage Program. Residents, who are mostly contractual workers and garbage collectors, resisted the project, saying they could not afford its monthly amortization.

There were also 37 more families who would lose their homes due to a road widening program, which included Gulfo’s junkshop. 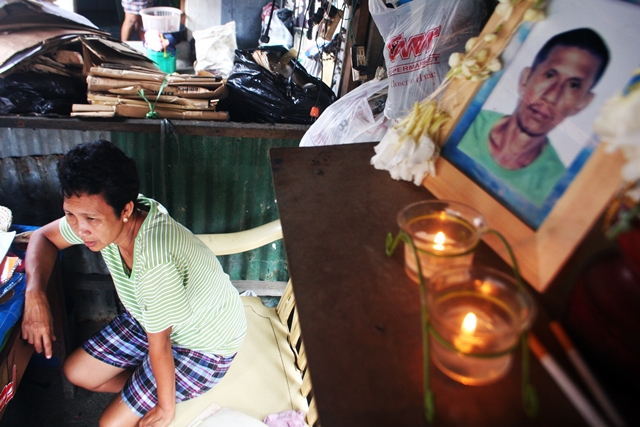 “Who else would have him killed but those who claim this land? I do not like to point fingers but I am sure that it is related to our struggle for land,” Divina said.

Marilou Valle, an urban poor leader, was also gunned down in front of her house in Sitio Damayan in Tondo, Manila on July 22, a day before Aquino delivered his state of the nation address. Her husband Jeorge De Jesus said her death is politically motivated because she and the rest of their family have been “consistent in their very strong opposition to anti-poor activities which suspects Ben and Raffy Tejas are doing.”

Their community, too, is facing demolition. In a letter of National Housing Authority (NHA) General Manager Chito Cruz to Bishop Elmer Bolocon, executive secretary of the Ecumenical Bishops Forum (EBF), he said that the area occupied by the informal settlers is a portion of the Vitas Reclamation and Industrial Areas in Vitas, Tondo.

“It is covered by a project and loan agreement with the World Bank. NHA was mandated to reclaim and develop the area pursuant to Executive Order 1086 into a port-oriented commercial and industrial area,” the letter read, adding that the housing agency are reviewing how to “coordinate and solicit all efforts of stakeholders to ensure the peaceful and orderly relocation and resettlement of the families affected thereat.”

The EBF said in its statement that Valle has already been receiving death threats but has set it aside, saying that “she knew that threats, harassments and deaths are part of her fight against evil.”

“It hurts that we lost our mother. She spent her life fighting for the welfare of families living here. She died here. And this is the same place where we would gather our strength to rise back,” Rossana Bacani, Valle’s daughter, told Bulatlat.com during the fact finding and solidarity mission led by urban poor groups.

The Philippine Star reported that the Manila Police District has ordered for the manhunt of suspects, brothers Ben and Raffy Tejas, saying that they dispatched a team to Buntay village in Oras, Eastern Samar, where the two were allegedly hiding. In a separate report, however, MPD Station 1 commander Alexander Navarette said they “came back empty handed, adding that they tracked Raffy to his hometown but the “fugitive fled to the mountains” while “his brother, Benjamin, remains at large.”