The Aquino administration’s program for universal PhilHealth coverage is actually patterned after US President Barack Obama’s health care program. An important aspect of Obama and Aquino’s health care program is universal health insurance coverage through compulsory coverage and government-subsidized coverage for a segment, not the whole, of the poor.

According to the Department of Health, it is implementing a Universal Health Care (UHC) program that aims to provide “highest possible quality of health care that is accessible, efficient, equitably distributed, adequately funded, fairly financed, and appropriately used by an informed and empowered public.” The most significant reform include in the program is the expansion of PhilHealth coverage to include enrollment of the poorest of the poor and mandatory inclusion of the informal sector who can afford to pay the premium, improvement of the membership services to increase awareness of the benefits and entitlements, access to inpatient and outpatient services and zero co-payment for the poorest in government hospitals.

The National Household Targeting System for Poverty Reduction (NHTS-PR), which was implemented by the Department of Social Welfare and Development (DSWD) to identify the beneficiaries to its Conditional Cash Transfer program, will also be the basis for identifying who will be enrolled under PhilHealth’s sponsored program. 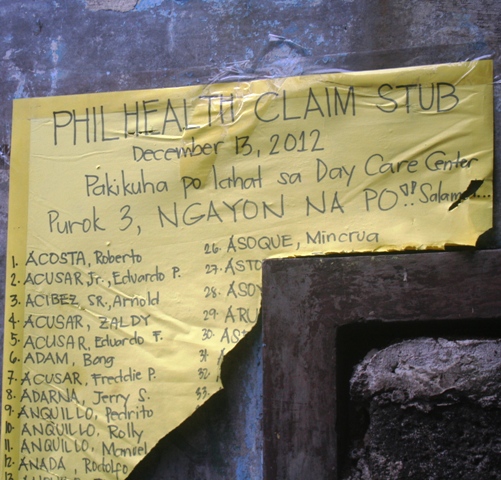 Many of the residents of Isla Puting Bato in Tondo, Manila, are not members of Philhealth. Some list their names but were not able to get their cards, some took a year to claim their card. (Photo by Anne Marxze D. Umil / bulatlat.com)

There are 25 identified medical and surgical cases covered by this policy. These cases have corresponding case rate payments. For example, a patient with Dengue I case could avail of a P8,000 ($195) subsidy from PhilHealth. If the patient’s bill exceeds thealloted subsidy, a sponsored member would not be shouldering the excess amount.But individually paying members and employed members of PhilHealth would have to shoulder the exceeded cost during hospitalization. Sponsored members could also reimburse payments for necessary items and services during confinement. PhilHealth requires health facilities to attach the official receipt/s detailing the purchases in the claim application for the said confinement.

PhilHealth benefits under the sponsored program covers subsidy for room and board, drugs and medicines, laboratories, operating room and professional fees for confinement of no less than 24 hours.The same is also applicable to individually paying members and employed members. According to PhilHealth, premiums of members under the sponsored program are jointly shouldered by the national government and local government units or by private individuals and companies, as well as members of Congress through their Priority Development Assistance Fund (PDAF) and other philanthropists.

The government even allotted P12.6 billion ($30 million) in the 2013 budget for PhilHealth. According to the Network Opposed to Privatization (NOP), the budget allocation is in line with the 2011-2015 Philippine Development Plan, with its target to enroll 5.2 million poorest families by the year 2015.

As of January of this year, individually paying members, including overseas Filipino workers, will have to pay P150 ($3.65) per month, an increase from the previous premium of P100 ($2.43) per month. The premium payments of those employed, on the other hand, will depend on one’s salary bracket: an employed PhilHealth member earning P7,000 ($170.73) and below per month will have to pay P175 ($4.26), shared in half by the employer and the employee. 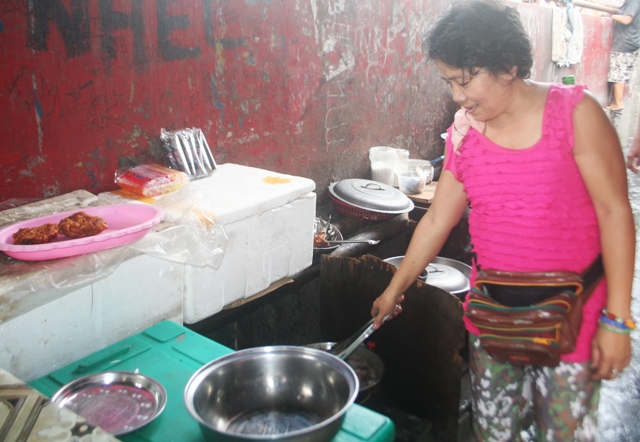 Virginia Cagadas, 53, widow a and mother of three has a stub to claim her Philhealth card but she arrived late during the distribution. (Photo by Anne Marxze D. Umil / bulatlat.com)

However, the government’s declaration that it aims to provide “better and quality health care” for Filipino people is fraught with contradictions.

The DOH said PhilHealth aims to “reduce out-of-pocket expenditures to prevent poor patients from being burdened by debts, especially in times of illness.”

But according to Dr. Gene Nisperos, vice president of the Health Alliance for Democracy (Head), “The government’s share in the total health expenditure has decreased from 40 percent in 2000 to 24 percent in 2008. The PhilHealth’s share had not increased beyond 10 percent and even decreased to 7.2 percent also in 2008. Therefore, the patients’ out-of-pocket expense has reached to 57.9 percent (in 2008) from 40 percent (in 2000).”

The condition of government hospitals also has to be taken into consideration. While the PhilHealth has a promising NBB policy, many government hospitals, on the other hand,are not well equipped to provide services for the cases listed under the said policy. “PhilHealth coverage is useless if the public healthcare system remains neglected,” said Dr. Julie Caguiat, convenor of NOP.

Caguiat explained, the NBB only benefits sponsored members who are confined in accredited state-run hospitals, suffering from select 25 medical & surgical conditions. These cases are the following: