However, many provincial and district hospitals are not even equipped to provide services for these cases. And this scenario would even get worse for as long as the government continues its non-allocation of appropriate funds for direct health services to government hospitals.

“In a public hospital, it is important that there are enough supplies for the needs of the patients. Emergency rooms, for example, should have complete supplies, from cotton to dextrose and medicines, because we are saving lives in the ER. But this is not happening. Now ERs of public hospitals have very limited supplies. Worse, ER fees are being exacted in public hospitals to augment their limited budget,” Jossel Ebesate told Bulatlat.com. Ebesate is a registered nurse who has been serving in the Philippine General Hospital for 25 years and is the national president of the Alliance of Health Workers.

“Hospitals in far flung areas in the provinces do not only lack equipment but also medicines and even personnel,”Dr. EleonorJara, executive director of Council for Health and Development and convener of the NOP, added.

Also, many patients are going to tertiary hospitals rather than in primary or secondary hospitals because of lack of health infrastructure. 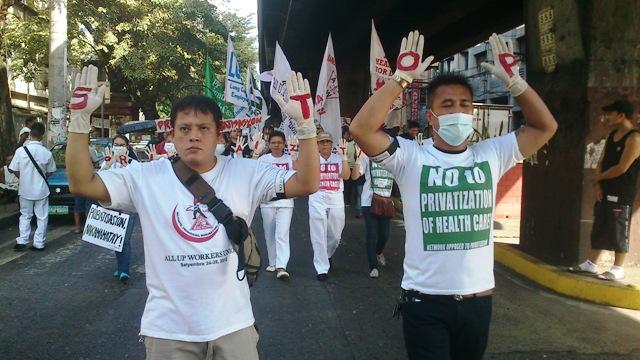 There are also questions regarding PhilHealth’s coverage. Ibon said the ultimate drawback in advancing this policy is that the measurement of the level of poverty in the country, which the government uses as reference for its indigent program, does not capture the true state of impoverishment and inability to pay for a basic service such as health.The 2008 National Demographic and Health Survey shows that 79 percent of the poorest 20 percent have no health insurance while 35 percent of the top 20 percentile also have no health insurance. Meanwhile, only one of the five respondents belonging to the poorest 20 percent is a member of PhilHealth while six out of 10 in the richest 20 percent are PhilHealth members. The 2008 survey also noted that 2.6 percent of the richest 20 percent are under the PhilHealth’s indigent program.

The identification of beneficiaries of the sponsored program and the distribution of PhilHealth cards are far from systematic.

According to residents of Isla Puting Bato in Tondo, Manila, some government employees arrived in their community telling them to list their names for PhilHealth membership.Beverly Seda, 25, mother of four,said PhilHealth cards were distributed in their area last Dec. 15, 2012 but she did not receive one.

Virginia Cagadas, 53, widow a and mother of three has a stub to claim her PhilHealth card but she arrived late during the distribution. Laura Batica, 52, mother of three, has a PhilHealth card that she got one year after her enlistment last 2011. But Batica never used her card because no one got sick in her family. If ever they got ill, she said, they went to the health center for check up and free medicines if the health center has supplies and, if there is none, they manage to borrow money to spend for their medicines.

“The solution that PhilHealth coverage provides is curative instead of preventing diseases,” said Caguiat. Since the benefit coverage of PhilHealth is for hospitalization, it does not cover outpatients seeking consultation.

The PhilHealth card also expires after one year.For Batica, Cagadas and Seda, the PhilHealth premium is already costly at P150 per month.

Cagadas who works for almost 24 hours, sees PhilHealth as a measure to reduce expenses if ever she or any member of her family gets sick. However, her P600 ($14) a day income from a small food stallis not enough to cover for her expenses as she too is paying for her debts. She said that as much as she wanted to, she could not afford to pay for the premium. Meanwhile Batica finds it useless to have a PhilHealth card if there is no one in her family who gets sick and confined in the hospital.

To avail of PhilHealth benefits, a member should have paid the premium for at least nine consecutive months. If the payment of the premium is discontinued, the member could not avail of PhilHealth benefits no matter how many months the member had already paid. For example, if the individually paying member has been paying his premium for three years and then stopped due to financial constraints, he can no longer use his PhilHealth card, if needed. Once discontinued, say for a month or so, he should apply for another PhilHealth card and the previous PhilHealth card will be void. This policy is being questioned by cause-oriented groups.

“Where did PhilHealth Corporation spend the people’s money? It is absurd that the people paid for their insurance and yet they cannot use it?” Caguiat said.

Philhealth also enhances inequity as utilization rates are highest among employed members and remain very low among the sponsored members. Batica, whose 24-year-old son is suffering from epilepsy, said, she could not bring him to the hospital because of lack of money. Batica does not have a regular job and is only earning P90 ($2.19) or P60 ($1.46) from the lottery. “We can barely have food on the table. We’re lucky if we get to eat three times a day but most often we only eat once a day,” Batica told Bulatlat.com.

To sum up, this is the Aquino government’s health agenda: lower and eventually eliminate government spending on health, require PhilHealth coverage, and allow private investments in erstwhile government hospitals.

Clearly, Aquino’s health agenda is a continuation of neoliberal policies that were implemented by the previous administrations. It only changed in name but is essentially the same policy, according to Ibon,Aquino has adopted and continued the Formula One for health of the Arroyo administration and the Health Sector Agenda of the Estrada administration. Both policies have advanced the neoliberal agenda in health such as hospital corporatization, medical tourism, and opening up erstwhile government hospitals to allow local and foreign corporations to profit from health care provision.

Caguiat said that by 2014, the budget for Maintenance and Other Operating Expenses of government hospitalswill be totally cut-off. By 2020 the government will no longer allocate budget for personnel services to government hospitals. The goal of the government is for DOH-retained hospitals to be fully corporatized and autonomous and will not receive any subsidy by 2020. “Health services will be through a health insurance system which is a private enterprise, specifically PhilHealth. Aquino’s health plan is paving the way for private businesses to gradually take full control of the country’s health care delivery. Consequently, this will deprive even more the poor of their right to health,” Jara said.

US President Obama’s health care reform was his centerpiece program when he campaigned for the presidency. He nearly lost his reelection bid because it did not even make a dent in providing access to health care services to majority of Americans. And now, the Aquino government is trying to do the same: putting up health care services up for sale.