The super body, or the Inter-Agency committee (IAC) on extralegal killings, enforced disappearances, torture and other grave violation of the right to life, liberty and security of persons was created by virtue of Administrative Order No. 35.

Present in the meeting were Justice Secretary Leila de Lima, chairman of the IAC, Presidential Adviser on the Peace Process Teresita Deles, Presidential Adviser on Political Affairs Ronald Llamas, and undersecretaries from the Departments of National Defense and the Interior and Local Government. There were also representatives from the Philippine National Police’s Human Rights Office, Task Force Usig, Armed Forces’ Human Rights Office, and the National Bureau of Investigation.

Commission on Human Rights chairwoman Loreta Ann Rosales and a representative from the Office of the Ombudsman sat as observers.

“The process is turning out well. The TWG is really looking into each case,” De Lima said in Filipino. 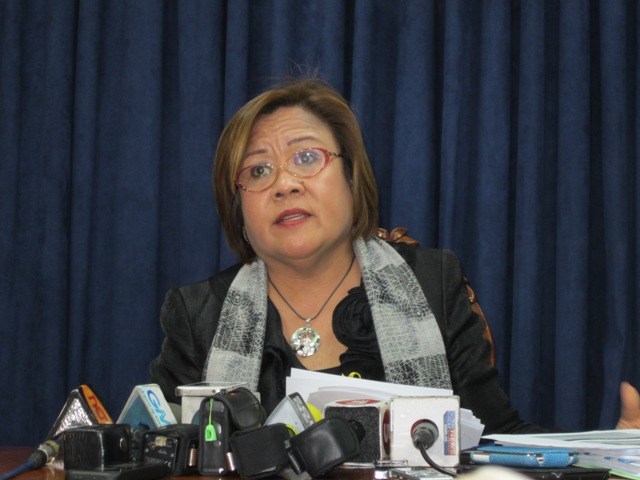 De Lima disclosed that they have agreed on the working definition of extrajudicial killing.

The criteria set are as follows: the victim was targeted due to political beliefs, (2) by a state agent or non-state agent and (3) the circumstances or methods of the attack. “Presence of any two or all elements would qualify as EJK [extrajudicial killing],” she said.

Human rights groups, however, deemed that the super body started on the wrong foot.

“The super body started with a super wrong framework,” Edre Olalia, secretary general of the National Union of Peoples’ Lawyers (NUPL), said in a text message to Bulatlat.com.

“Extrajudicial killings must be seen in context as essentially and mainly – as reality starkly shows – as a human rights violation and as such, committed by the state and its forces. Other killings, reprehensible as they may be, are crimes that the state should already be prosecuting as a matter of course,” Olalia said.

The organization of human rights lawyers deemed that the super body’s definition is “strained” and “will blur and smokescreen extrajudicial killings, skirt impunity issues and even make scapegoats with the body’s distractive and confused ostensible functions.”

“What the Task Force Usig maliciously did, the new super body will fall into as an open trap,” Olalia said. 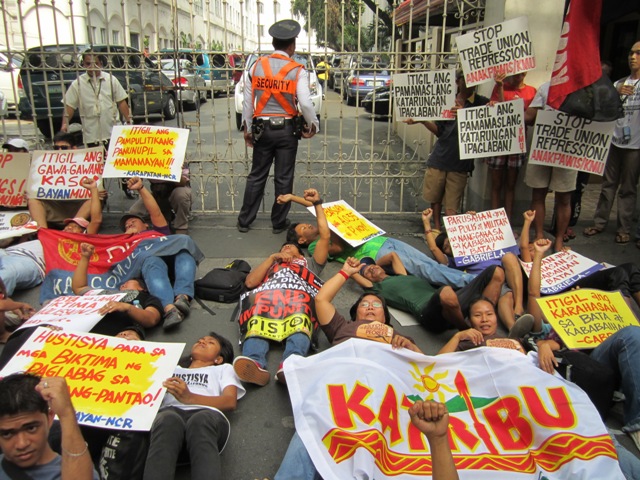 Outside the Department of Justice, members of human rights groups and relatives of victims of human rights violations hold a protest against the so-called ‘super body.’(Photo by Ronalyn V. Olea / bulatlat.com)

“By their definition and by including killings by non-state actors, the super body exonerates the Aquino administration from its grave violations,” Cristina Palabay, Karapatan secretary general, said.

Karapatan maintained that killings perpetrated by the state are “distinct in character.” “[State-perpetrated] killings impact upon the victims and relatives because they suffer violations from the very entity that is bound by international laws to protect and promote the right to life.”

As of November 30, 2012, the rights group has documented a total of 132 victims of extrajudicial killings and 12 victims of enforced disappearance under the Aquino government.

The super body’s definition of extrajudicial killings, according to Karapatan, only “goes to show that the super body is nothing but a tool to deceive and clean the hands of the Aquino government.”

The super body will include cases of human rights violations that took place from 2001 to the present, De Lima said.

De Lima said they will closely monitor the cases of enforced disappearances of Jonas Burgos and University of the Philippines students Karen Empeño and Sherlyn Cadapan.

Mrs. Edita Burgos, mother of Jonas, filed serious illegal detention charges against several military officials. The case is under preliminary investigation at the Department of Justice. Meanwhile, the mothers of Karen and Sherlyn also filed criminal charges against retired Gen. Jovito Palparan Jr. and three other military officials. The Bulacan court issued a warrant of arrest in December 2011 but Palparan and a co-accused remain at large.

“If we can show progress in these high-profile cases — that would mean a lot especially to the international human rights community and in terms of the qualitative output of the Executive department,” she said.

The super body, De Lima said, is willing to liaison with the judiciary to propose needed measures to expedite the cases.

Asked for targets, De Lima said they are looking at several prosecutions and convictions in the next two years.

The justice secretary related that when she went to Washington and Geneva last year, the lack of convictions is a serious concern of the United Nations Human Rights Committee.

“Victims and relatives have been waiting for the longest time,” Olalia said. “Government rhetoric must be matched by concrete and credible results and real justice.”