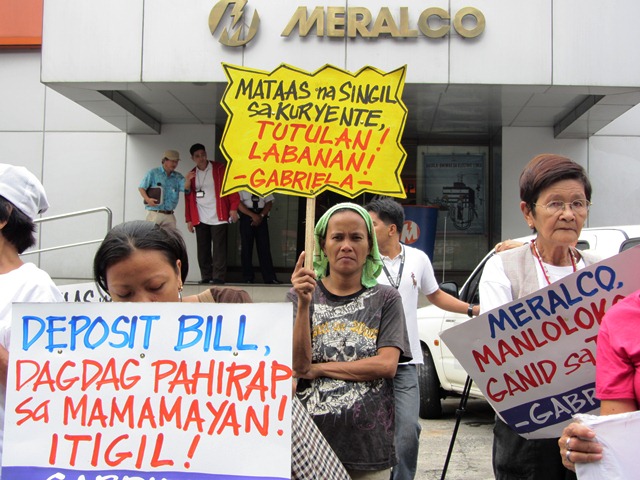 MANILA – Members of womens’ group Gabriela trooped to an office of Meralco in Quezon City this week to denounce the electric distributor’s increases in rates this year.

“It is the first month of the year and already, Meralco is introducing a rate hike and at the same time renewing its decision to exact a bill deposit charge which was foiled by protests last year,” said Joms Salvador in Filipino. Salvador is the secretary general of Gabriela.

Some of the protesting women brought along their children, who also joined the group’s noise barrage and some lifted placards bearing the messages of their mothers to Meralco. These messages range from calling Meralco “greedy” (the company has recently announced its increased profits for the past year), to calling for the end of EPIRA, and protesting the rate increases this year as “unjust.” 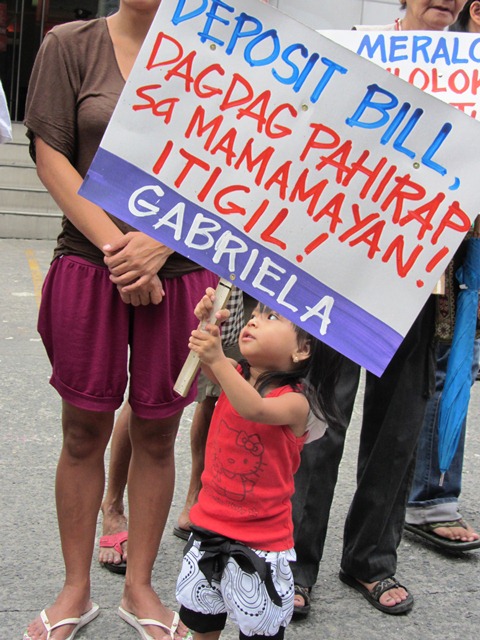 EPIRA or Electric Power Industry Reform Act is the 11-year old law blamed for having allowed electricity rates in the Philippines to increase so much.

The P0.30 rate increase means a P70 ($1.73) increase in monthly bills of ordinary consumers, the group said. That’s equivalent to two kilos of rice, enough for a family’s one day meal, said Salvador.

Considering the rate increases are not likely to be offset by a corresponding hike in wages, plus there remains the old problem of scanty jobs or livelihood available, the rate increases mean a day’s meal taken away from an ordinary family, Salvador said in a speech during the group’s picket Wednesday. 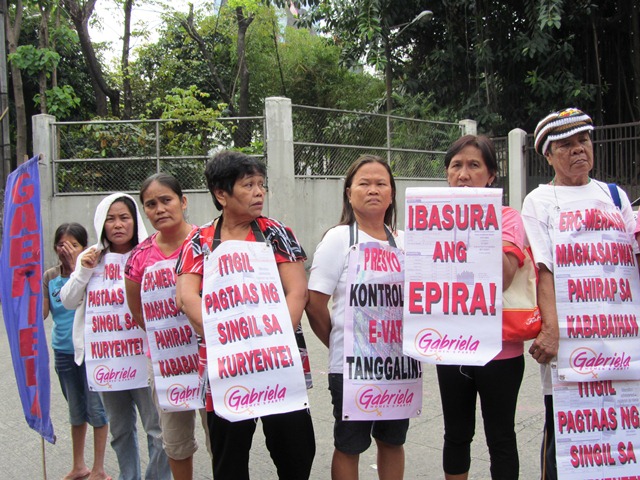 “Meralco compares their bill deposit charge to house rent deposits. But unlike the latter, you cannot take it back in its entirety when you move out. Also, the people are not likely to benefit from the bill deposit charge because it is not ‘consumable’ – your electricity will still be cut off if you failed to pay your month’s rent, despite your having paid for a bill deposit,” Salvador explained.

Already, the Philippines has the most pricey electricity in Asia, and globally it ranks third in high prices of electricity. Yet, as Gabriela pointed out, it is one of the poorest countries.

The women’s group urged the public to protest in the many ways they can think of not just the rate increases and the “invented” charges being exacted the consumers by Meralco. The group urged the public to also protest the EPIRA which gives Meralco the license to increase rates and “invent” charges at will, despite its undeniable surges in profits in the past years and its sure income considering its monopoly of the service.

“There is a lot we can do to solve this problem of increasing electricity rates,” Salvador told the media at the sidelines of their picket. She said their group is currently preparing a “strong campaign aimed against EPIRA” and for launching calls to nationalize the power industry instead of privatizing it.

Protests are effective, the picketing women said, saying if there had been no protests last year, for example, Meralco could have gotten away more easily with their bill deposit charges. “That’s a small victory,” Salvador said.

This year, Gabriela announced they will have “protest centers.” They urged consumers to drop by and have their electric bills stamped with “Paid under protest” before they present it to Meralco billing offices. 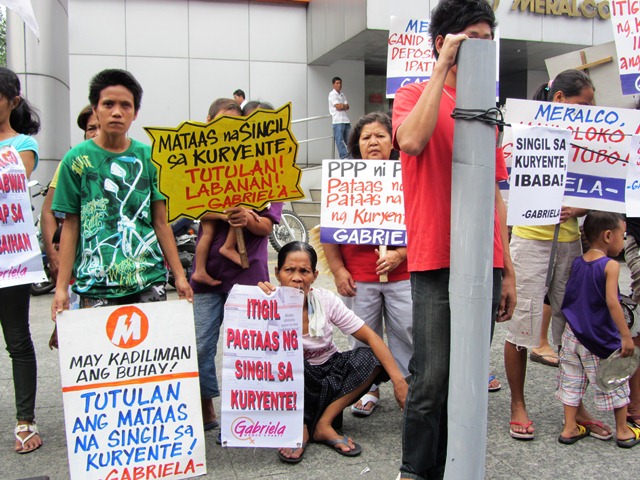 The group said even the prepaid cards for electricity will not help, since electricity is an essential service. The people have no choice but use electricity, Salvador said. She reiterated that the long-term solution starting with scrapping the EPIRA is more preferable.