Rather than being hyped up about the so-called growth and glossing over damning economic trends, the Aquino government is urged to look into indicators that are relevant to the people, such as adequate incomes, stable jobs and sufficient social services.

MANILA – The Aquino government’s “good news” of higher than expected Gross Domestic Product growth may have earned for it praises from international economists and foreign investors, but from peoples’ organizations and independent think-tanks in the Philippines, it was greeted more with incredulity and foreboding.

“Not enough jobs are being created and there’s massive retrenchment. Wages are being pressed down further and social services, aside from deteriorating, are becoming more expensive for workers and the poor. Where’s development in that?” Elmer “Bong” Labog, chairman of KMU, asked in a statement.

Describing the reported GDP growth and the attendant hoopla in its reporting as mere “hype,” independent research group Ibon Philippines said the reported 6.6-percent growth in gross domestic product (GDP) in 2012 “has not improved the jobs situation in the country, which even worsened last year.” In 2012 the number of unemployed and underemployed Filipinos increased to 11.9 million. 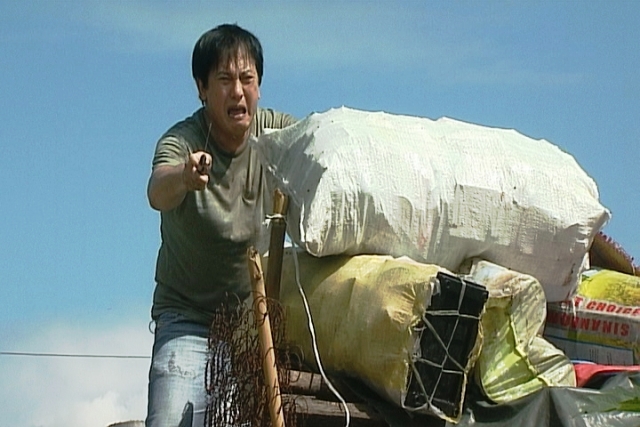 Actor Philip Salvador in a role of a poor oddjobber Pinoy (Photo grabbed from an ABS-CBN TV episode / bulatlat.com)

IBON estimates that the number of unemployed Filipinos increased by 48,000 to reach 4.4 million and the number of underemployed by 349,000 to reach 7.5 million in 2012 – for a total of 11.9 million unemployed and underemployed. The unemployment rate remained at 10.5percent while the underemployment rate increased significantly to 20 percent from 19.3 percent the year before. These figures are based on IBON’s estimates on official data correcting for the change in methodology that they say underreports unemployment.

The official government unemployment figure for 2012 is 7 percent but which is also unchanged from the year before. As it is, the Philippines still has the worst unemployment in East Asia compared for instance to Thailand (0.6 percent), Singapore (1.7 percent), Malaysia (3 percent), Korea (3 percent), China (4.1 percent), Taiwan (4.3 percent), Vietnam (4.4 percent), and Indonesia (6.5 percent).

“The Aquino government’s hype over the GDP growth is intended to cover up the worsening situation of workers and the poor in the country,” Labog said. He warned that the latest Aquino hype suggests further ruinous programs for the Filipino working people. The labor leader notes that for the sake of maintaining, or “sustaining” this hyped growth, the Aquino government is now bent on implementing programs previously resisted by ordinary Filipinos.

The recent GDP growth will likely “be used to justify the implementation of more anti-poor policies and Charter Change,” Labog warned. The labor group pointed to how, in the past weeks, National Economic Development Authority director-general Arsenio Balisacan has been pushing for more tax laws, more Public-Private Partnership projects, and the creation of more power plants constructed through Build-Operate-Transfer schemes, saying the country’s growth would be “unsustainable” without these measures.

At the same time, American businessmen and the US-Philippines Society called on the Aquino government to amend the economic provisions of the country’s Constitution and to join the Trans Pacific Partnership trade alliance.

Labog warned that “The policies being floated by the Aquino government will only concentrate more wealth in the hands of a few foreign and local elites and continue to impoverish the workers and the poor. The government hopes its hype about economic growth will weaken opposition to its anti-poor and anti-Filipino policies.”

The KMU asked workers and the people to “not be deceived by the Aquino government’s lies about economic growth.” They said the people’s situation clearly belies Aquino’s hype. “Mass hunger, poverty and joblessness have become more and more palpable under Aquino’s term,” Labog said.

Even if the reported growth is meaningless to ordinary Filipinos, Ibon also warned that the government’s hype is meant to create an appealing image of the Philippine economy for foreign investors. But the problem, they said, is that this same path has been proven as ruinous for the Filipino people.

According to IBON, the jobs situation has in fact worsened because the Aquino administration has not changed the failed economic policies of past administrations, which have already resulted in over a decade of jobless growth in the country. The last decade, it said, has seen the fastest growth in the post-Marcos era, yet has also seen record joblessness and increasing numbers of poor Filipinos aside from severe inequality.

Jobs and higher wages are the best mechanisms for inclusive growth, Ibon said, and it can only be achieved with well-developed Filipino industry and equitable agricultural development.

“Sustainable job generation and poverty reduction requires active and responsible state intervention to build Filipino industry and develop local agriculture,” IBON said. Unfortunately, this is the opposite of the path being taken by the Aquino government.

Looking into the sources of Aquino’s hyped GDP growth, Ibon found that the growth is “based on merely shallow and speculative sources undeserving of hype.”

Ibon disclosed that the recent third quarter GDP growth was driven mainly by public construction, posting a growth of 24.3-percent from 8.8-percent in the previous year. If the Aquino government were more candid, it would also have been humbled than proud of its figures here because, according to Ibon, despite Aquino’s infrastructure budget worth P142 billion in 2012, it failed to attract foreign direct investment (FDI) in construction, which, Ibon said, substantially slowed down to a 29-percent growth in January-September 2012 from 2011.

Aside from construction, the GDP growth was also driven by transportation, storage and communication (TSC), trade and repair, financial intermediation, and real estate, renting and business activities. These sectors, said Ibon, are not domestically-grounded production using domestic sources. Aside from all gains going to foreign companies, these high growth sectors are also not resulting in sufficient job creation and in fact, are the sectors that reported the most number of business closures and job retrenchments, the research group said.

IBON added that, despite supposedly being the highest growth in Southeast Asia, “growth is not happening in the context of an economy-wide production.” Instead, Aquino’s growth hype is “speculative and is intended to build a stable image of the Philippine economy to attract foreign capital.”

Rather than being hyped up about the so-called growth and glossing over damning economic trends, the Aquino government is urged to “look into indicators that are relevant to the people, such as adequate incomes, stable jobs and sufficient social services.”