MANILA – Members of PISTON Partylist sounded the alarm again on what they condemned as weekly price hikes and just-for-show price rollbacks in oil products. In a picket protest along Aurora Boulevard in Cubao, Quezon City on Wednesday January 30, the transport group asked President Benigno “Noynoy” Aquino III to “act with haste on the requests of Filipino drivers, operators and the riding public for a big-time rollback and at the same time to take to task those abusive oil companies.”

George San Mateo, president of PISTON Partylist, said price manipulation of petroleum products is quite obvious if one observes the movement of international and local oil prices.

“Note that a mere whisper of oil price hike abroad would immediately send local prices upward, even if the oil products being sold here are inventories bought long before the price hike overseas. But during the times that oil prices are going down in the world market, the corresponding rollbacks here are too paltry and much delayed,” San Mateo said in Filipino. The result of this, he added, is ceaseless hike in oil prices and correspondingly, in profits of companies selling it. What enriches oil companies greatly impoverishes Filipino consumers, especially public utility drivers. 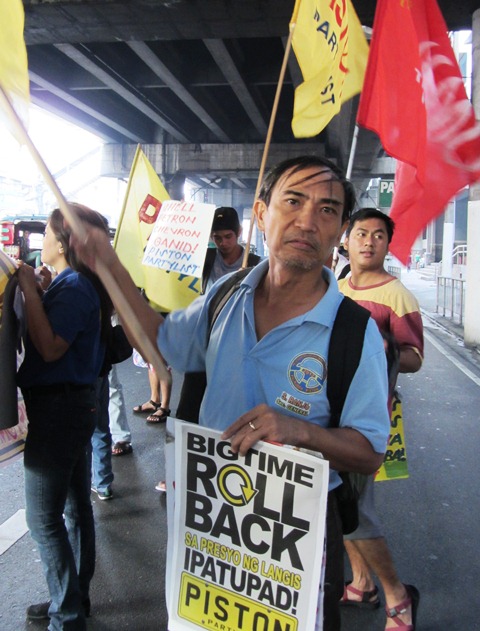 Manuel Bohos, 34, has been a public utility jeepney driver for 17 years now. Looking back to even just five years before, he said, the take-home income of jeepney drivers like him today has shrunk more than half while the cost of oil products has increased. That is, even if jeepney drivers force themselves to work up to 24 hours per workday.

About five years ago, he said, the jeepney driver’s nearly 24-hour working day netted for them a take-home income of P1,400 to P1,600 (US$34.31 to $39.21) on a good day. (Among jeepney drivers, a 16 to 24-hour-workday is common as they strive to maximize the earning potential of the jeepney on any day they pay rent or “boundary” for it. Bohos for example, works three days a week, 24-hours per working day, or a total of 72 hours per week. He and another driver alternate in taking out the same jeepney.)

Bohos joined PISTON in 2008 because he realized that there are indeed many government policies contributing or resulting in their worsening poverty. And, he added, PISTON is quite right to criticize and conduct mass actions against these policies, to demand the end of it. Bohos proudly admits to being an activist driver, if that means opposing the ceaseless oil price hikes that rob them of their income.

“We are compelled to work longer hours now, up to 24 hours,” he said.

This morning of January 30, Bohos joined PISTON’s picket-rally in Cubao, as they demanded a big-time oil price rollback and the scrapping of the 12-percent EVAT on oil products. Bohos is also the new vice-president of PISTON Partylist chapter in Cubao-Divisoria route. 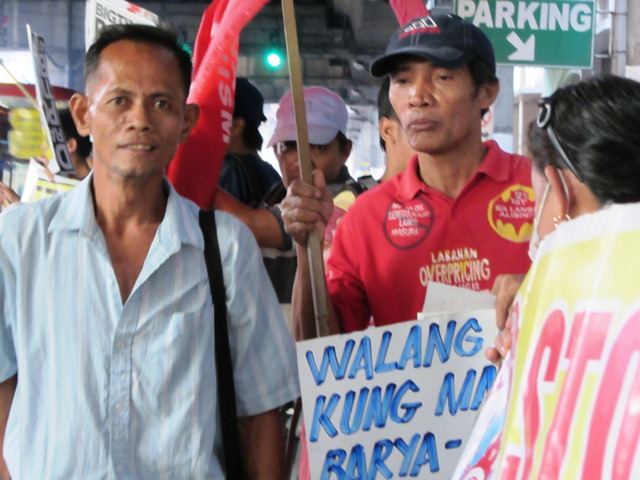 Another participant to the picket was Jun Cernechez, 57. A PISTON Partylist member, he had worked as a jeepney driver for seven years. Now a freelance mechanic of FX/AUV, cars and jeepneys, he joined the January 30 rally against oil price hikes because, as he explained, his earnings also take a hit every time oil prices increase.

“With every oil price hike, prices of other products especially our basic needs and spare parts also increase. With that, my income effectively decreases,” Cernechez said in Filipino.

San Mateo said the Aquino government also has to implement concrete plans to provide the people some immediate relief from the nonstop oil price hikes.

This week the transport workers heard again the announcement they have grown to expect and continue to fear nearly every week. Last Monday the Department of Energy announced a price hike for diesel by P0.35 per liter and for gasoline by P0.90 ($0.02) per liter.
“Almost every week since last Christmas, the DOE has been announcing oil price hikes,” PISTON noted in a statement.

“Instead of allowing the price hikes, the Aquino government should have been taking the oil companies to task for their abuses in setting oil prices,” San Mateo said. The transport leader said oil companies must return to the people the amount of money it had overcharged them since the Oil Deregulation Law was implemented.
PISTON estimated last year that the amount of overcharging was P9 (US$0.22) per liter of diesel and P16 ($0.39) per liter of gasoline. Today PISTON mentioned the overcharged amount again, despite a government-formed task force last year that defended the oil companies and denied the charges of overpricing. 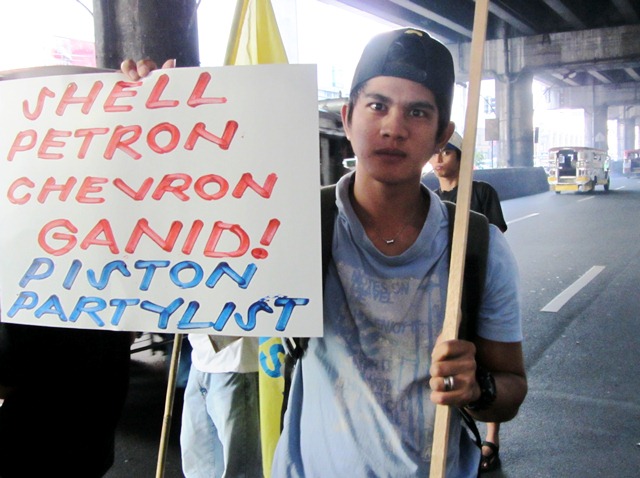 Aside from the almost weekly oil price hikes, other government-approved price hikes this year would significantly eat into the income of drivers and most workers, other groups of workers said. These price hikes include the already government-approved rate increases in water and electric services, toll fees, fees for securing various government documents such as birth certificate and passport, Philhealth premium, and fare hikes in MRT and LRT, tax on texting, hike in SSS premium, and hikes in services of public hospitals currently being sold off to the highest bidder.

“The Aquino government has done nothing but approve laws that impoverish us,” the labor group Kilusang Mayo Uno (KMU) declared in a statement. Like Piston, the labor group KMU blames the Oil Deregulation Law, the EPIRA, privatization of water services, public-private setups of building and running the country’s rail systems, roads and highways and now, increasingly, hospitals, too, for big private companies’ licenses to increase prices of their products or services.

Both the KMU and PISTON demanded immediate relief from the Aquino government – Piston asked for big-time rollback of oil prices; KMU asked for a legislated P125 ($3.06) wage hike. They both urged the public to support moves toward pushing for these calls.