In recognition of its consistent record in fighting for the people’s welfare against incessant oil price hikes, the Oil Deregulation Law, and the VAT on oil products, the Comelec approved the application for accreditation of transport group Piston as a partylist group.

MANILA – Members of Piston (Pinagkaisang Samahan ng Tsuper at Opereytor Nationwide) held a protest action and noise barrage today against the fresh wave of steep increases in oil prices. An old jeepney driver told Bulatlat.com, in between hitting with a short steel bar an empty LPG tank, that since middle of July up to this week of August, oil prices have increased seven times – hiking oil prices a total of P8 ($0.19) per liter.

George San Mateo, president of Piston, said these price increases did not just wipe out the effect of 12 price rollbacks implemented since May; by now it had also increased by P2.85 ($0.07) the price per liter of gasoline, and by P2.50 ($0.06) the price per liter of diesel. This, he said, is on top of the still unresolved complaints of persistent oil overpricing allegedly being done by the monopoly oil companies. 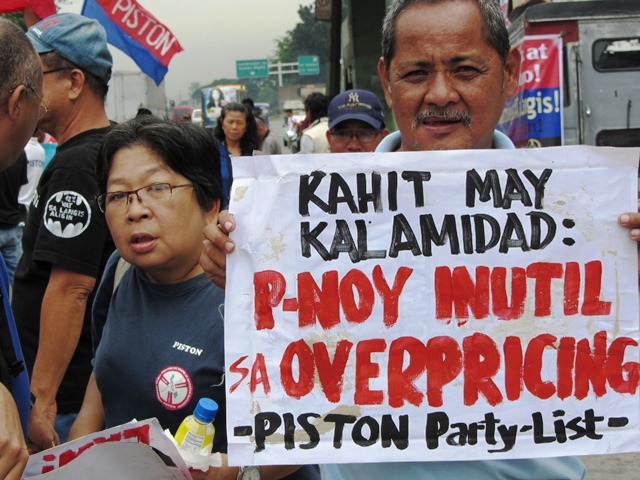 Malacañang’s statement issued by Presidential deputy spokesperson Abigail Valte last week, which told the people to get used to oil price hikes because the oil industry in the Philippines is deregulated, did not sit well with the progressive transport group. “It is easy for Malacañang to say that,” San Mateo said, “especially since it is us the people who pay for the petrol of vehicles being used by Malacañang and other government officials.”

San Mateo added that the Malacañang statement only revealed how it knows that the deregulation of the oil industry is in fact the cause of oil price spikes, “yet President Benigno “Noynoy” Aquino continues to rebuff the people’s demand to scrap the 14-year old Oil Deregulation Law.“

Piston said that since the Downstream Oil Industry Deregulation Law was enacted in 1998, “the oil cartel operating in the Philippines has gained strength and further tightened its stranglehold on the industry. It has imposed a 400-percent to 500-percent increase in oil prices since 1998.”

Last April, before the series of small price rollbacks were implemented, the Aquino government announced, amid growing protests against oil price hikes, the formation of an “independent oil price review committee.” This committee, led by UP economics professor Benjamin Diokno, assured the public that by July they would have released their “scientific report” on whether there is truth to accusations of overpricing, among others. But July had passed without the promised report being heard or publicly released.

Piston said the noise barrage they held this Wednesday morning at Philcoa, Quezon City was part of their weekly protest actions. They started it last July 25, with a protest caravan at the head offices of Shell Philippine subsidiary in Makati City. On Aug 1 they picketed in front of the headquarters of Danding Cojuangco-controlled Petron in Ortigas Center. On Aug 15 they held a protest action and noise barrage in Novaliches. On Aug. 22 they trooped again in front of Shell in Makati and last Aug 24, they protested at a busy junction in Cubao, Quezon City. 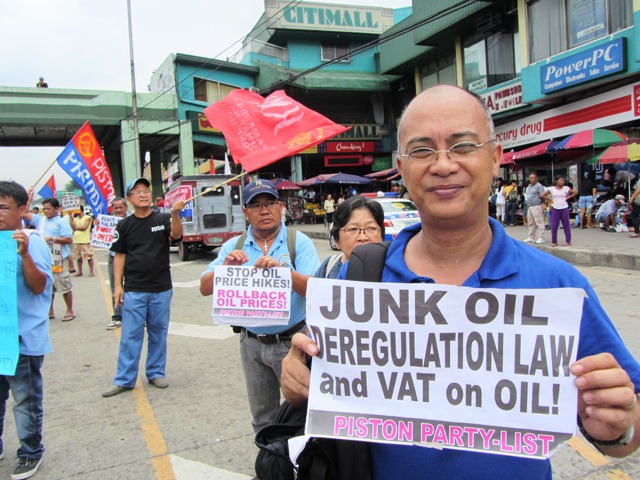 Piston in one of its weekly protests against oil overpricing, Philcoa, Q.C. (Photo by Marya Salamat / bulatlat.com)

Piston explained that the weekly protests are “preparations” for a nationally-coordinated protest action slated sometime next month “if President Aquino continues to allow increases in prices of oil products, and if he continues to play deaf to the transport groups’ demands of (1) indefinite moratorium on oil price hikes; (2) suspension or outright revocation of the Oil Deregulation Law; (3) suspension or outright scrapping of Value-Added Tax slapped on oil products and (4) conducting a genuine investigation of oil overpricing.”

In another statement, San Mateo of Piston shared that the 2nd division of the Commission on Elections (Comelec) has approved Piston’s petition for partylist registration. “Many drivers and the people welcomed the news,” San Mateo said, saying if they are to be elected, they could add Congress as one of the many venues in which the ordinary transport workers and small operators could try to advance their long-standing demands against the Oil Deregulation Law and the VAT on oil products. He said they would also help in advancing legislative proposals promoting the welfare, rights and livelihoods of drivers, small operators and the people in general. 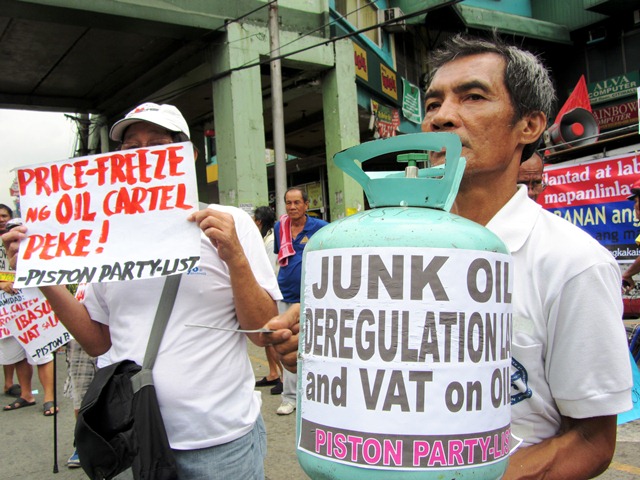 Drivers beat on their empty LPG tanks like this one during ‘noise barrages’ vs oil price hikes (Photo by Marya Salamat / bulatlat.com)

In the Comelec’s resolution approving Piston’s registration as a partylist organization, it said that Piston, upon close examination, has appropriately presented that it is an active sectoral organization seeking to uplift the economic, political and social situation of the drivers and small-owner operators of the public utility land transport sector.
Comelec admitted that Piston’s “impressive track record evinces that since its inception in 1985, PISTON has championed the causes of its members and the riding public and actively campaigned against periodic oil price increases as well as other transport-related concerns.” Among national issues in which PISTON’s “vigorously taken steps” are acknowledged include its consistent campaign asking for the suspension or outright removal of the 12% Expanded Value Added Tax on petroleum products and repeal of the Oil Deregulation Law.