“Only our protests can force President Aquino to control oil prices.” – KMU

MANILA – Despite the peoples’ protests against the oil firms’ alleged persistent overpricing, and amid news of the oil firms’ bigger profits in the past year, oil companies have raised their prices anew this week. The latest hike followed a series of bigger increases imposed last month. Further increases also reportedly threaten to be implemented in the coming weeks, as the oil firms and the Department of Energy talk of various reasons why such increases would likely happen.

The result: just a month and a week into the new year, the oil firms have already raised the pump price of diesel by P1.30 per liter; unleaded gasoline by P3.10, and an 11-kg LPG tank by a staggering P115.50, based on the monitoring of multisectoral group Bayan (Bagong Alyansang Makabayan). The meager rollbacks the oil firms sometimes granted are always overran by the bigger and more frequent price increases, noted George San Mateo, chairman of transport group Piston (Pinagkaisang Samahan ng mga Tsuper at Opereytor Nationwide).

The result, again, is worsening hunger among Filipinos as their wages and the availability of decent-paying jobs failed many times over to keep pace with the price hikes.

In all these oil price increases, the Aquino government, led by the Department of Energy, has always pointed to the Oil Deregulation Law or Republic Act (RA) 8479 as the reason why they cannot do anything but “monitor” prices. Yet, in the past, in the face of transport strikes and nationwide protests, the government (under Arroyo) was compelled to temporarily control oil prices, following a disaster which the oil companies had ignored when it raised its prices at the time. Under Aquino, he has promised, and failed so far, to scrutinize the books of oil companies. Aquino has also renewed the already discredited Pantawid-Pasada program, which gives token financial aid to public transport drivers. 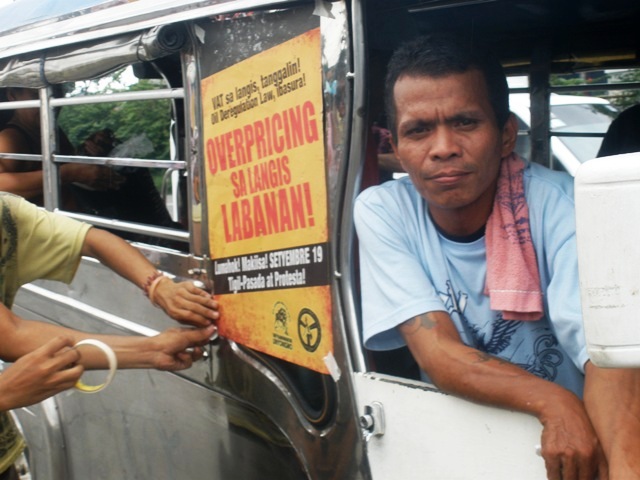 As the law that ties the hands of the government in controlling oil overpricing turns 14 this Friday, Bayan and various peoples’ organizations asked the public to join or organize protest actions against the said law. In a statement, Bayan said that it is “absolutely and urgently necessary for policy makers to scrap the deregulation law because of its harsh impact to consumers and the economy.”

The oil companies and the Department of Energy (DOE) habitually blamed the rise in global oil prices for the recent spate of increases in local prices. But Bayan countered that consumers are only being forced to fully shoulder the burden of unreasonable price hikes under the 14-year old Oil Deregulation Law. The Oil Deregulation Law allows oil companies to automatically adjust their prices.

Oil deregulation and loss of government duty vs speculation, overpricing

“It’s unconscionable that oil firms are permitted to automatically hike their retail prices even when it is generally accepted that global price changes are speculative. Even the Energy Department admits that price movements are fueled by speculation. But these price increases are wantonly passed on to consumers because of the deregulated oil regime,” said Eleanor de Guzman, deputy secretary-general of Bayan.

De Guzman added that due to the lack of state regulation of prices, the Oil Deregulation Law has given oil companies “more opportunities to rake in huge profits by price manipulation or overpricing, at the expense of hapless consumers.”

Last week, in a party for the anniversary of the Philippine Information Agency, President Aquino told reporters that he is willing to impose price controls on petroleum products “if necessary.”

What would make it necessary is peoples’ protests, Elmer “Bong” Labog, national chairman of KMU, said. The labor leader called on the workers and people to join protests to put pressure on the president to control oil prices.

Reasoning that if Aquino had sincerely wanted to control oil prices, he would have done it long ago, Labog called on the public to join the protests against oil overpricing. “Aquino won’t willingly control oil prices,” said Labog. But Aquino may be persuaded to do that by strong peoples’ protests.

“Only our protests can force President Aquino to control oil prices,” said Labog. The labor group has called for a national day of protest against the overpricing of oil products in the first weeks of March. Piston, meanwhile, has been preparing for various types of mass actions, including strikes, in different areas of the country. In the south, chapters of Piston have reportedly been alternately conducting rallies or doing hour-long transport strikes everyday in protest against oil overpricing and oil deregulation law.

Bayan and its member-organizations said they are planning to stage protest actions to mark the anniversary of the Oil Deregulation Law or Republic Act (RA) 8479.