You Are Here: Home → 2013 → February → 27 → Break-ins seen as prelude to Aquino’s increased efforts to silence critics

The Aquino government is gravely mistaken if it thinks it can silence activists who are voicing out the people’s growing dissatisfaction with their regime. – Elmer Labog, KMU chairman

MANILA – On February 22, at around 8:30 a.m., Henry Huecas, president of Alliance of Nationalist and Genuine Labor Unions (Anglo), went to their office in Kamias road, Quezon City to get some items. He was shocked to find the padlocks in the two cabinets broken and his 16-gigabyte USB flash drive missing.

Pablo Banaag, Anglo general secretary, checked the other rooms and discovered that another cabinet was left open, its padlock broken. The two desktop computers, as well as the appliances such as the television set and refrigerator, are still there.

Huecas said the break-in probably took place on the night of February 21, when there was no one left to stay at the office.

“Clearly, this is no ordinary robbery,” Huecas told Bulatlat.com in an interview. It is one of the latest in a series of break-ins into offices and homes of other progressive organizations. Not yet counting the incident at Anglo office, Karapatan and Bayan had documented 12 cases of break-ins of houses of activists and peace advocates, and of offices of progressive organizations from March 2012 until second week of February this year (or more than one case of recorded break-in per month). 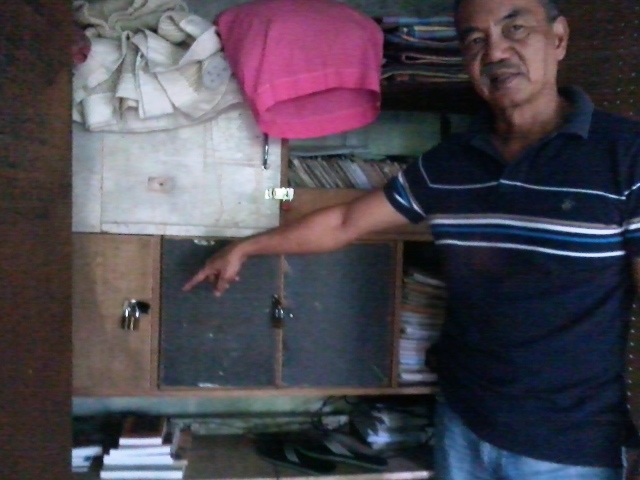 Henry Huecas, president of Alliance of Nationalist Genuine Labor Organizations (Anglo), points to the lockers inside their office in Quezon City that had been ransacked (Photo by Ronalyn Olea / bulatlat.com)

On January 13, staff members of the Salinlahi Alliance for Children’s Concerns and Parents’ Alternative for ECCD, Inc. (PAI) found the cash for children’s snacks, which they kept in one of the cabinets, missing. Before the incident, staff members saw a man loitering in front of their office in Project 3, Quezon City.

On Christmas Day last year, the office of the Health Alliance for Democracy at E. Rodriguez, Quezon City was broken into. A staff went to the office on December 29 and saw the door open, with cabinets and drawers open and papers scattered on the floor. A laptop and a camera were missing.

The office of Gabriela Women’s Party (GWP) in Tandang Sora, Quezon City was also broken into on June 13, 2012.

On September 4, 2012, there was an attempt to set on fire the office of the National Federation of Labor Unions in Mandaluyong. According to witnesses, a man riding a motorcycle set on fire the plastic net wrapped around the office’s iron gate, which stands close to old wooden houses of neighboring houses.

On February 9, Rosie Tumbagahon, an independent nominee to the NDFP Joint Secretariat (JS), was held up inside a jeepney. A man pointed a gun to Tumbagahon’s forehead and grabbed her shoulder bag. He asked for keys to the Office of the NDFP Nominated Section of the Joint Secretariat. He also took away her cellphone, papers and USB flash drives.

That same night, the house of Rey Casambre, a consultant of the NDFP for the peace talks, was broken into. His laptop computers and one old USB flash drive were stolen, together with some cash.

In a press conference February 22, Cristina Palabay, Karapatan secretary general, said the incidents were made to appear as common crimes but actually, these were targeted attacks on activists and their organizations.

“Only the military would have the motive and the means to carry out these attacks,” Reyes said.

“The usual targets of the perpetrators are data storage devices such as flash disks, hard drives and laptops, cellular phones and cameras. It appears that the intelligence operatives are gathering more data on government critics as a prelude to possibly more attacks, especially during the election season,” the groups said.

Palabay said the break-ins violated the activists’ constitutional rights and guaranteed freedoms, including the:

1) Freedom of thought, association, and expression; freedom of conscience, political and/or religious beliefs and practices and the right not to be punished or held accountable in the exercise of these rights;

2) Collective right to be secure in our persons, houses, papers and effects against unreasonable searches and seizures; right to liberty of movement;

3) Right to privacy of communication and correspondence, especially against intercepting, pilfering and opening of mail matters and conducting illegal surveillance and information gathering through electronic and other means 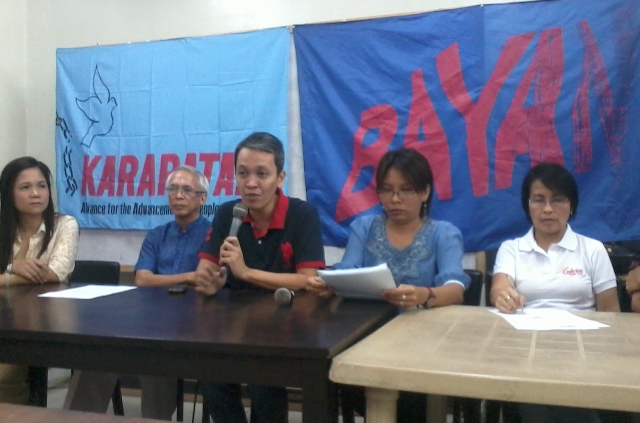 4) Right against all forms of threats, harassment and intimidation done to instill fear or anxiety on the target organizations and individuals by threatening the person/s, their security, privacy, honor, liberty and property. The surveillance activities before and after the incidents in the said offices point are stark indicators of such violations;

5) Right against violation of domicile as these are clear cases of forcible entries and intrusion, without authority or consent of owners or occupants;

6) Right against destruction and divestment of property affecting the functions of the organizations and individuals in their work.

Worse than during Arroyo’s time

Huecas of labor federation ANGLO said the Aquino administration must respect the rights of legitimate people’s organizations. “Is it a crime to defend the rights of our fellow workers?” he asked.

“There is a trend here,” Elmer Labog, chairman of Kilusang Mayo Uno (KMU), said. “The Aquino government, like that of Arroyo’s, is implementing a systematic campaign against activists and government critics.”

Palabay said the attacks constitute a desperate attempt to meet the mid-term target of the Aquino government’s Oplan Bayanihan, the government’s counter-insurgency program. She said the frequency of the incidents is “unprecedented, and not seen even during the Arroyo regime.”

Palabay noted that the incidents became more frequent starting December 2012, when Lt. Gen. Eduardo Ano was appointed as intelligence chief, and when Gen. Emmanuel Bautista was appointed AFP Chief of Staff on January 2013. Ano is implicated in the abduction and disappearance of Jonas Burgos, and in other cases of rights violations; Bautista is known as the brains behind Oplan Bayanihan.

“It seems they [Aquino government] are laying the ground for bigger attacks,” Casambre told Bulatlat.com in an interview.

Palabay recalled that during the administration of Gloria Macapagal-Arroyo, victims of extrajudicial killings and other human rights violations were also ubjected to surveillance and profiling. “We see more of the same, except for the break-ins,” she said.