“It is not just about the error in assessing facts and evidences, but the tendency to ignore and cover up state responsibility in extrajudicial killings.”

MANILA – In black, Maria Aurora Santiago went to the Department of Justice (DOJ) yesterday morning to file a petition for review of the prosecutor’s resolution on the killing of her fiancé, Dutch missionary Willem Geertman.

Last December 27, 2012, the Office of City Prosecutor in San Fernando, Pampanga recommended in a resolution the filing of robbery with homicide charges against two suspects and John and Peter Does.

Geertman was shot dead by two assailants in front of the Alay Bayan Luzon Inc. (ABI) office in Telabastagan village, San Fernando, Pampanga on July 3, 2012. One of the suspects took his shoulder bag which contained cash and documents.

But Santiago, 47, told Bulatlat.com “It is not a simple case of robbery.” She said she knows who had intentions to kill Geertman, her partner for four years.

Santiago was aware of the threats and harassment against Geertman. “At one time, an Army officer publicly tagged him as a supporter of the NPA [New People’s Army] during a meeting in Aurora village called for by the military,” she related. “Wim was there and he protested.” 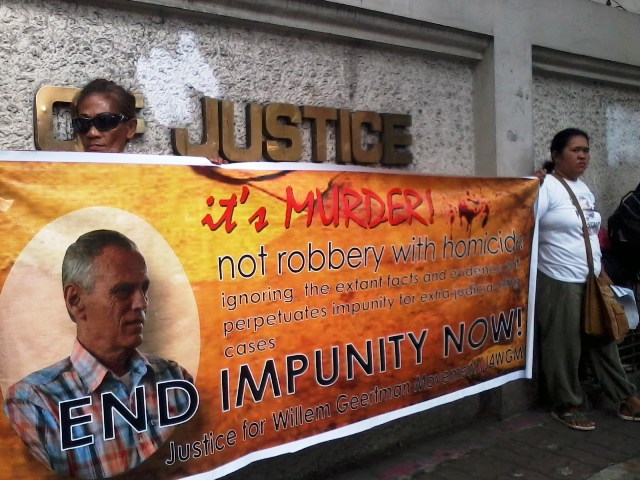 In a picket held outside the Department of Justice (DOJ), Feb. 26, colleagues maintain Willem Geertman was a victim of extrajudicial killing.(Photo by Ronalyn Olea / bulatlat.com)

Santiago was disappointed at the way the case is going. “I appeal to Secretary Leila de Lima to review the case and consider the killing of Wim [Geertman] as one of the cases of extrajudicial killing under the Aquino administration,” she said.

In the Petition for Review, the National Union of Peoples’ Lawyers (NUPL), counsel for Santiago, argued that the investigating prosecutor failed to appreciate the facts and the evidence that the main purpose of the perpetrator was to assassinate Geertman and not to rob him.

Assistant State Prosecutor Philip Tumala had argued in their December resolution, that “it is immaterial where the victim was shot as long as it was established that there was taking of the personal property, whether prior to, subsequent thereto or simultaneously at the time of the killing, and regardless of his personal affiliation and advocacy.”

The NUPL disagreed. “If the purpose of killing Wilhem was to facilitate the alleged robbery, then they [suspects] should have shot him immediately…Instead, they went into the trouble of making him ignominiously kneel down thereby costing them several minutes before they were able to carry out their alleged plan.”

“These acts,” the lawyers pointed out, “clearly show that they intended to kill him, and they divested him of his personal belongings only after killing him.”

The lawyers further said that the two crimes, murder and robbery, have no direct relation under the specific facts and circumstances, and it negate the conclusion that the killing was carried out to facilitate the robbery.

The NUPL is asking the DOJ to set aside the prosecutor’s resolution and file two separate charges of murder and robbery against the two suspects and several John and Peter Does.

“It is likely that they are hired killers. The masterminds must be identified,” Santiago said.

Santiago added that Geertman’s siblings are closely monitoring the case. “They are frustrated with the developments.”

“Wim [Geertman] dedicated his life for the Filipino people. The Philippine government must see to it that justice is served,” Santiago said.

The NUPL called on Justice Secretary De Lima to act immediately on the case.

“This is not merely about an investigating prosecutor’s error in the appreciation of the facts and the pieces of evidence before him,” Edre Olalia, NUPL secretary general, said. He concluded that as in this case, “The bigger picture is the propensity to ignore and cover up state responsibility in extrajudicial killings, and that contributes to the impunity and obscures the political nature of the attack.”