Aquino govt’s positioning on Sabah a result of secret negotiations?

The Kiram family says it is about principles not money. “Let us settle this historic claim now.”

MANILA – President Benigno “Noynoy” Aquino owes much of his political capital from parents Ninoy Aquino and Cory Aquino, who are dubbed as “icons of democracy” in the Philippines. But given his handling (or mishandling) of the Sabah issue, not only his administration but the record also of his icon parents are now beginning to be questioned by diverse groups.

Before a jampacked audience of young and old teachers, students, professionals and activists who attended a Bayan-sponsored forum on the Moro people’s claim, Abraham Idjirani, spokesperson of the Sultanate of Sulu and North Borneo, admitted they were tired of fighting. They have fought the Spanish colonialism for more than 300 years, then US for more than 50 years, then Japan during the Second World War for at least 4 years, and later the so-called Mindanao conflict under the Filipino government. Now, he said, “We just want to develop Sulu for the Filipinos.”

The Sultanate of Sulu led by Sultan Jamalul Kiram III has been asserting its proprietary right on the island of Sabah, which for the past 50 years had de-facto been annexed by Malaysia into its territory after the British colonialists “illegally” ceded it to them.

In summary, “Sabah was land-grabbed, then turned over to Malaysia by (British) colonialists,” said Carol Pagaduan-Araullo, national chairperson of Bagong Alyansang Makabayan. But Aquino has been “disinterested, aloof, not inclined to claim but rather more likely to drop the claim on Sabah,” Araullo said. In fact, she equated Aquino’s actions to “virtual dropping of the Sabah claim.”

This virtual dropping of the Philippine claim to Sabah, Araullo said, “has defined Aquino’s behavior from the time the army of the Sultanate went there in Lahad Datu (in February).” She described Aquino’s actions as toeing the Malaysian claim, and de-facto granting that claim to Sabah on Malaysia. She suggested also that Aquino’s unwillingness to lift a hand to press the country’s historical claim on the island is being covered up by Aquino’s excuses of “still studying” the claim, as well as Aquino’s muddling the issue from searching for supposed conspiracies to taking potshots at the Kirams.

A former career minister and consul general of the Department of Foreign Affairs, Hermes J. Dorado, linked President Aquino’s “reluctance” or “inutility in taking up the Sabah claim to an alleged deal Ninoy Aquino may have forged with then Malaysian leader Muhammad Mahathir in exchange for supporting Ninoy’s opposition to Marcos. 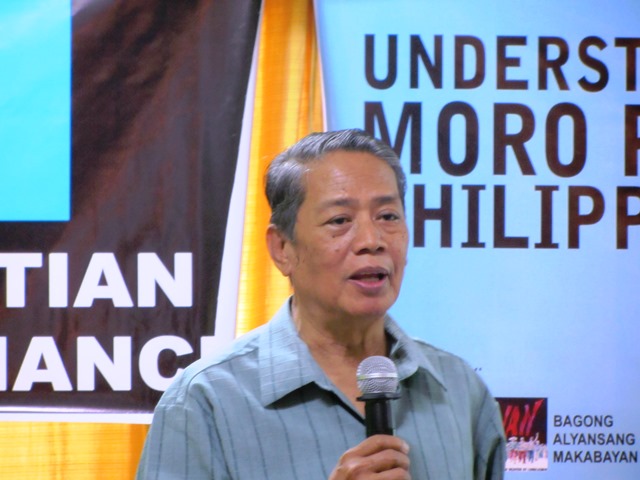 Dorado revealed that in his job at DFA, he learned that Ninoy had motored to Malaysia via Singapore shortly before he was killed in Manila in August, 1983.

“Why was he there in Malaysia?” Dorado asked. He speculated that Ninoy had needed all support he can get to oust Marcos, and Malaysia’s Muhammad Mahathir had wanted Marcos to be ousted, if only to remove the Malaysian problem of Philippine claim to Sabah.

Dorado alleged that “that started the reluctance of Aquino, his inutility and holding back in rescuing Filipino citizens” from Malaysia. He said the Philippine government’s hands are tied because its leadership then and today are committed to drop the Philippine claim on Sabah. He points as “clearest proof” the 1987 Constitution, Art. 1, which omitted key words from 1973 Constitution that included in Philippine territory other territories belonging to it by historic right and title.

Dorado said that the Sabah claim had been enshrined in the 1973 Constitution, but was totally deleted in the 1987 constitution under the Cory Aquino administration. He charged that “it’s because of the 1983 commitment. Cory and Mahathir made sure those 14 words were deleted.”

The Philippines became a republic in Jan 23rd of 1899, yet, the country that proudly boasts of being the first in Asia to become a republic is not celebrating this day, Dorado said. He unveiled a map of Philippine territory, drawn by the first Philippine republic. He repeatedly stressed that this map is also being ignored today in favor of a map imposed by the US colonialists who had drawn it arbitrarily, in a hurry, to make the US Senate approve its colonization of the Philippines in 1898.

The first Philippine Republic’s map of Philippine territory was praised in Washington as one of the best, Dorado said. “Some features shown in the map can be used in asserting our claims,” he added.

Dorado urged for the reprinting of this whole atlas because “this is the picture of our country we have forgotten, and now somebody is claiming parts of it, until no more is left.”

He added that for half a century, it’s been one Malaysian obsession (Sabah), and we’ve been out-maneuvered. We are divided and we didn’t know our own country.”

Dorado was not the first to question or criticize President Aquino and his icon parents over the Sabah issue. Earlier, on a separate occasion, Nur Misuari, head of MNLF (Moro National Liberation Front), said Aquino should be liable for impeachment over his neglect of the welfare of Filipinos in Sabah.

Misuari also slammed Aquino for “ingratitude.” Saying they in the MNLF had protected and hid Ms Aquino from former dictator Ferdinand Marcos’ armed troops prior to the February Edsa revolution, Misuari asked last week why Aquino was repaying that by sitting idly as the Tausugs and Filipinos in Sabah are being killed and maltreated.

Aquino’s father, Ninoy, also traced his popularity as oppositionist to Marcos when as a reporter, he broke the story of the Jabidah massacre (the killings of Moros Marcos had asked the military to train, lured by promises to occupy Sabah).

No graceful exit for Aquino’s dropping of Sabah claim

“Bayan salutes the Sultanate’s political act to assert its claim,” Araullo of Bayan said. She noted that when Aquino from day 1 gave the Kirams an ultimatum, and even threatened it of prosecution, “he was being in tune with Malaysian government’s call on the sultanate’s army to surrender.”

Indeed, while Araullo was saying this at the forum on Moro peoples’ Sabah claim in UP this Tuesday, Malacañang was sending subpoenas via the NBI and threatening the family of Sultan Jamalul Kiram III with charges over its royal army’s mission to Sabah.

Forces of Bayan and some members and supporters of the sultanate of Sulu are set to hold another protest this Wednesday March 13 in front of the Malaysian Embassy in Manila, over the likely violations of international humanitarian law being committed by Malaysian forces. Araullo described the armed attack as coming from Malaysia’s “institutionalized martial law government.” Or what Princess Jacel Kiram described as the Malaysian armed forces’ “excessive response.”

“Who is responsible for the carnage and humanitarian crisis unfolding in Sabah? We don’t even know if the dead were civilians. Ordinary Filipinos’ reports claimed they are under siege,” Araullo said.

Araullo said the Aquino government is inutile in the face of what’s happening in Malaysia. She slammed the government’s statement that it will still study the reports as clichéd excuses for its inutility. 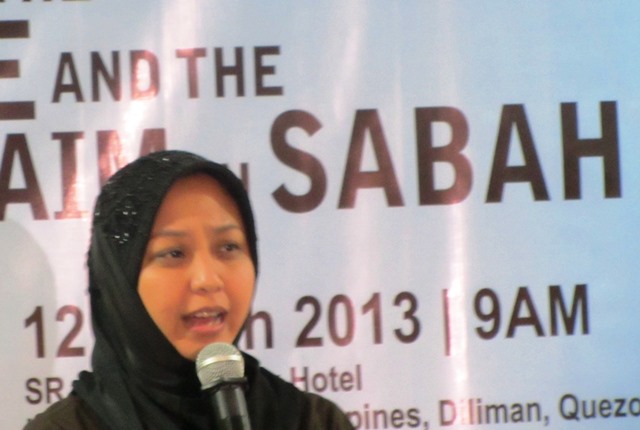 Princess Jacel Kiram says their family is just ‘administrator’ in claiming Sabah. They want the Filipinos to benefit from it. (Photo by Marya Salamat / bulatlat.com)

Sabah is reportedly rich in gas and oil deposits, and earning billions of revenues, of which 70% goes to the central government and not to Sabah. Many of the island’s population who work to produce these revenues are reportedly citizens with ethnic ties to Filipinos especially those in Mindanao.

Princess Jacel Kiram, daughter of Sultan Jamalul Kiram III, said their struggle to reclaim Sabah “is not just a struggle of the sultanate of Sulu.” The family has consistently said they want the Filipinos to benefit from the wealth of Sabah, over which the Kirams are “only administrators.” The young Kiram said that if money was the only interest of her father Kiram, they had been offered that in 1983, in exchange for dropping their claim on Sabah. Her father turned it down.

“Principles are what we’re fighting for,” Jacel Kiram said. She added that this issue (Sabah claim) has not been resolved in the past, now’s the time to do this.

Against “excessive military response” in Malaysia and threats of prosecution in the Philippines from the Aquino government, Princess Jacel Kiram reiterated their family’s position: “We have two rights to claim (Sabah); we still have the proprietary right.”
Unfortunately, the sovereignty right is something only the Philippine government can exercise, but it has not yet done so.

Raja Muda Agbimuddin Kiram is safe, Princess Jacel reported. “But many Flipinos died as a result of excessive military force used by Malaysia.” She was critical of her family’s experiences with Aquino’s “emissaries,” which included Mujiv Hattaman last week. The latter only reportedly informed them of likely charges that may be slapped the family.

“We wanted talks, not dictates to pullout. (If they’re not talking to us now, how much more when we have no more fighters in Lahad Datu?)” Still, Princess Jacel Kiram welcomed what she called as the “first official step, first talk between the Sultanate of Sulu and Philippine govt” recently.

DILG Secretry Mar Roxas was in talks recently with Jacel’s uncle. The topic of the talk had been fraught with intrigues, however, as the old Kiram was shown on TV, after talking with Roxas, as saying negative things about the claim to the sultanate of Sultan Jamalul Kiram III, and Princess Jacel’s being made a spokesperson.

Aquino’s “cacique diplomacy,” or his understanding of a fellow landgrabber, cannot be relied upon and we cannot expect his government to act according to national interest, Araullo of Bayan said. She warned that Aquino’s stance is “to muddle the issue” while Aquino remains cold to the Sultanate’s claim. As such, Araullo urged the public that it’s up to them to make Noynoy stop his “noynoying” or supposed “studying” of the sultanate and Sabah issue, when a carnage is already taking place in Sabah.

“The Filipino’s claim on Sabah is legitimate,” Araullo stressed. She urged the public to pursue it vigorously “despite all geopolitical motives preventing it,” and to explain and fully ventilate the historical and legal grounds for the Sabah claims.