Mae Fe Ancheta-Templa, treading the path of the praxis of liberation

“I remain engaged in the people’s movement for social transformation wherever I am and whatever I do. The Philippine social realities demand structural changes and I believe in the people’s capacity to work for change.”

MANILA – She is a licensed social worker, an educator and an activist. She has a long list of achievements, awards and grants from different non-governmental institutions from around the globe. But Mae Fe Ancheta-Templa, 55, believes that she should always be working with and for the people.

“The social work practice I am into is one that is attached to poor communities. Being detached from the poor is a disservice and disentanglement from the people one commits to serve over and above self,” Templa told Bulatlat.com in an interview through email.

Templa is the third nominee of the ACT Teachers’ Party. Born and brought up by public school teachers in Davao City, Templa was a student leader before she became an organizer of teachers in June 1981.

Being a progressive educator advocating for people’s basic rights, Templa was not spared from harassments. She was listed under the Armed Forces of the Philippines’ Order of Battle since 1983. But even then, she continued with her advocacy and was able to surpass threats against her life.

“I survived many attempts at curtailing my freedom. Together with the Pablo-affected communities and other marginalized sectors of society, we will prevail for as long as we are on the side of the truth,” said Templa. She was one of the leaders of the survivors of typhoon Pablo who were charged with public disorder by the Department of Social Welfare and Development. 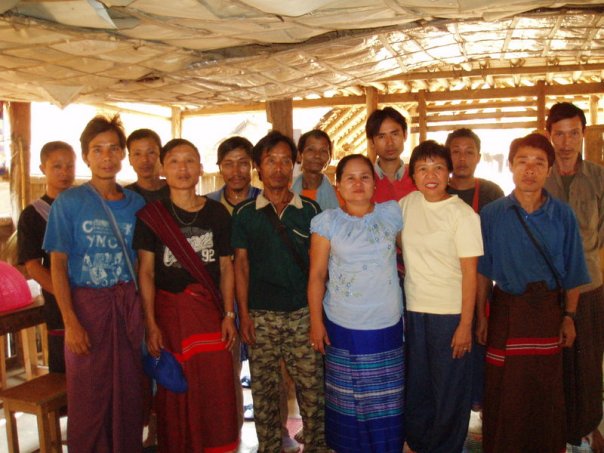 Templa (the woman in yellow shirt) during her visit in a Burmese refugee camp.(Photo grabbed from Mae Fe Ancheta-Templa’s Facebook page / bulatlat.com)

Templa, the second eldest in a brood of six, was a college student at the University of Mindanao when she was elected president of the Association of Social Work Students’ in 1979. It is an organization of social work students of the University of Mindanao. Before she was elected as president of the said organization, she said, she was just doing a research for her social work subject assignments in the library of the then Ministry of Social Services and Development (MSSD) when someone heard her criticizing the university’s lack of books on social work.

“I was reacting to the limited number of books on social work and social welfare in the university I went to. I was so vocal about how unresponsive schools are to the students’ needs and rights. I did not notice that people were listening to what I was saying. I was told a few weeks later, while engaging in small talk with the MSSD staff and library users, that some people admired my analysis of the education system prevailing in the country,” said Templa.

After that, she became involved in the student movement. She started attending student leaders’ forums on the educational system and students’ rights. The country was under martial law then and there were no student councils or publications. “The failure of the state to provide free education and quality education for all students from all socioeconomic strata was highlighted in these new setting of learning and unlearning.”

She described her transformation to being a student leader and a social worker as formative and educational. “What transpired in the MSSD library that led to my transformation as a student and as a social worker was formative and educational that until today, I imagine that if that did not happen, I might still be blind not only to the impending eruption of the social volcano but also to the historic beginnings and solutions to the prevailing crisis situation.”

During her days as a student leader, Templa was also instrumental in reviving the student movement from 1978 to 1980. Templa was part of the revival of the school paper and student councils. “Student alliance work was my main engagement then.” 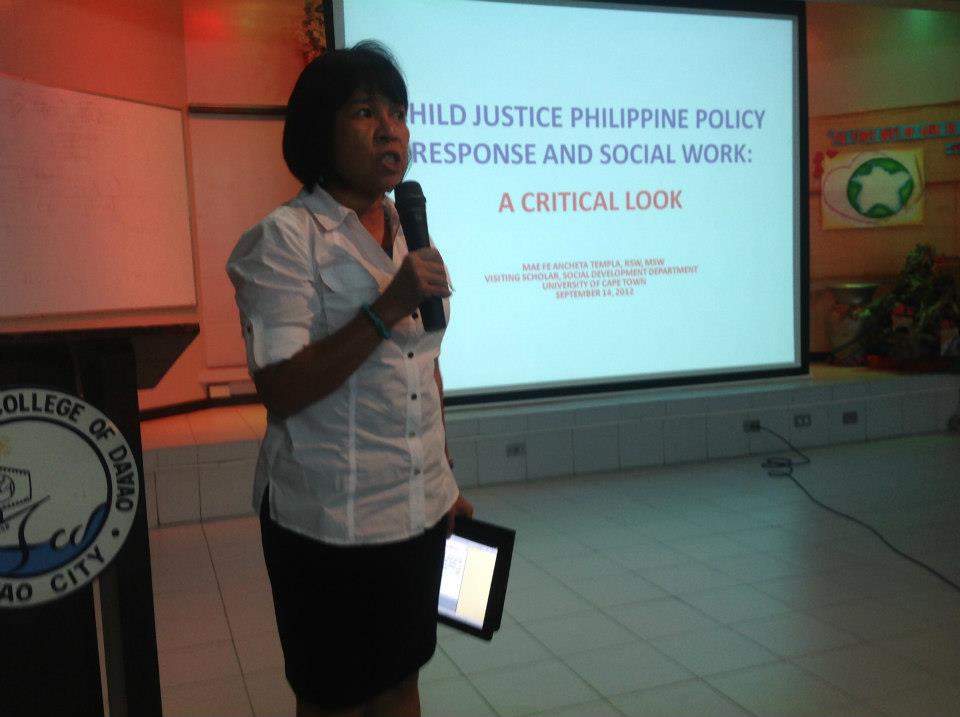 Templa in one of her speaking engagement.(Photo grabbed from Mae Fe Ancheta-Templa’s Facebook page / bulatlat.com)

From being a student leader, Templa became a social work educator in 1981. She was invited by the university to join the University of Mindanao Social Work Department as social work field instruction program coordinator and social work faculty.

“The two social work educators I was under likewise taught me how to analyze macro issues. Their teaching methodologies and techniques that went beyond the classroom complemented my appreciation of the analytical tool they shared. The social laboratory in the streets and communities was a big factor in the honing of social workers to becoming progressive practitioners and educators. I did find meaning in it even in that short term of two and a half years. It was to their credit that I was confident to accept the University invitation to handle the Social Work Field Instruction program of the University of Mindanao in 1981, thus becoming a social work educator.”

As a member of the faculty, Templa took advantage of being in the academe and started organizing and educating fellow educators from other schools.

“My background in the student’s movement was an advantage in my work with teachers. As primary organizer-lead convener of Kamkem (then Kammi) in 1981, I was involved in the conceptualization of the formation of the Education Forum in Mindanao and led the installation of its speakers’ bureau to assist Kammi-ACT in 1982,” Templa said.

“It is of importance to social work education and practice that human rights serve as a common standard and guide for the work of social workers and these include valuing life, freedom and liberty, equality and non-discrimination, justice, solidarity, social responsibility, peace and non-violence and trusteeship responsibility for the care of the environment,” Templa said.

To strengthen social work education with actual social development and human rights work, Templa did volunteer work for interfaith organizations. Because she was a practicing social worker involved in the struggles of the marginalized and an activist, Templa was not spared from being vilified and her life was put at risk.

“Since 1983 my name appears in the records of the Armed Forces of the Philippines and Philippine National Police intelligence units as teacher-organizer and political activist being a social work educator.”

In mid-1983, Templa needed to temporarily stop working for the teachers’ organization because of security concerns. But even so, she did not stop from working on what she believed is right. She continued to work for different cause-oriented organizations. In the late 1983, she was invited to work with another pioneering work, women’s rights and welfare through the Women Studies and Resource center and then later became part of the women’s movement.

In 1988, she was again invited to work with children in situations of armed conflict and disasters through the Children’s Rehabilitation Center outreach program for Mindanao and assisted in the development of the alliance of child rights advocates.

She is also one of the conveners of the Alliance Against Impunity (AIM). She also became a co-coordinator of Karapatan Women and Children’s Task Force in 2001 to 2006, vice-chairperson of Gabriela-Davao in 1999-2004, founding member of the Coalition Against Summary Execution in Davao from 2003 to present. She is also an advocate of justice and peace and held activities against the spate of bombings in Mindanao.

Her active involvement in human rights made her life at risk once again as she became part of a campaign against impunity. “As a licensed social worker highly visible in women and children’s rights work, I played the roles such as advocate, mediator, enabler, and direct service provider of psychosocial help in situations of armed-conflict and disasters.”

When her name was once again put in the order of battle, Templa prevented unnecessary sacrifices to prolong her service to the people.

Despite her involvement in different organizations and campaigns, Templa is still able to perform her tasks and continues to hold positions in the teachers’ organization. She has been the Mindanao coordinator of ACT in 2009-2011 and ACT-Teachers’ Partylist Mindanao coordinator from 2010 up to the present. She was also able to return to part-time teaching at a graduate school in the Ateneo De Davao University. She also opened the social work education program and now is the current program head/ department chair of the Bachelor of Science in Social Work of the Assumption College of Davao.

The path – the road less traveled as they say — that Templa took was also the path that her two daughters took. Both of her daughters are politically- conscious as they were exposed to Templa’s involvement in the women’s movement.

“My daughters started to appreciate my work since they were young because I brought them along while working with children and women,” Templa said. One of her daughter is also involved with OFWs in Dubai and became Gabriela-UAE’s Secretary-General from 2011 until February 2013.

“I remain engaged in the people’s movement for social transformation wherever I am and whatever I do. The Philippine social realities demand structural changes and I believe in the people’s capacity to work for change; a strong support group is needed in this protracted war against historic and systemic poverty, exploitation, oppression, marginalization, and discrimination. I want to be with the grassroots communities gaining ground and achieving victories toward the realization of that goal– improving the lives of the people and for a better society.”

Also, she said, “With a husband who used to be part of the human rights movement in Mindanao as a barrister, I have kept my faith in the people to pursue the call for social transformation.”