BAGUIO CITY — Environmentalists, church people and activists staged a rally at the gates of the Supreme Court (SC) grounds here, April 16, to demand the junking of Republic Act 7942 or the Philippine Mining Act of 1995.

The groups trooped to the SC just before the start of the oral arguments for the petition questioning the constitutionality of sections 80 and 81 of the Mining Act.

Cordillera Peoples Alliance (CPA) secretary general Abigail Anongos challenged the magistrates to once more declare the Mining Act unconstitutional and pave the way towards the creation of a mining law that will truly serve the interest of the people, protect the environment and boost national industrialization.

Anongos explained that in January of 2004, the SC declared some major provisions of the law as unconstitutional. In the same year, however, the high court reversed its decision, allowing 100 percent foreign ownership and control of mining activities in the country, contrary to the provisions of the Philippine Constitution. The Philippine Constitution allows only a maximum of 40 percent foreign ownership and control over industries and corporations in the country. 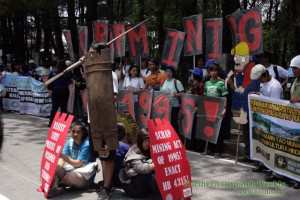 Anti-large scale mining activists picket the Supreme Court before the start of oral arguments for the petition questioning the constitutionality of sections 80 and 81 of the Mining Act..( Photo by Noel Godinez / Nordis.net)

“What have we gained from the Philippine Mining Act of 1995? Environmental disaster, economic dislocation, food insecurity and militarization that wreak havoc in communities,” Anongos said.

‘Flip-flop for the people’

In an earlier forum held by the same groups before marching to the SC, Makabayan senatorial bet Teddy Casiño who is one of the petitioners urged the magistrates to flip-flop and decide in favor of the people. “The SC has flip-flopped a couple of times already. How about this time they flip-flop to favor the interest of the people?” he said.

Casiño pointed out that in declaring the Mining Act unconstitutional, the SC would make it easier for the lawmakers to craft a more pro-people mining law. He said that there is a consolidated alternative mining bill pending in the 15th Congress which will be filed again in the next congress.

During the short program before the oral arguments, Casiño called on the SC to help correct the mistake of Congress that led to the enactment of the Mining Act 18 years ago. He reiterated that only the foreign transnational mining companies were happy with the passage of the law because it facilitated them to earn billions from the sellout of the country’s patrimony.

“The Philippine Mining Act of 1995 offers huge benefits, huge benefits for the big foreign transnational corporations. Even the government is short-changed because the share it gets is a pittance compared to the billions of profit being raked in by the big foreign mining companies,” he said. Northern Dispatch