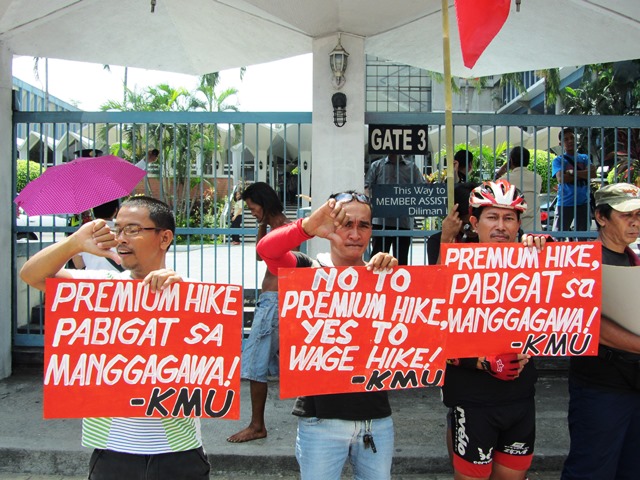 MANILA — Since the time of President Fidel V. Ramos, Filipino retirees have never seen their SSS pension increase. Quirico D. Gapasin, 77, complained of this as he joined a picket in front of the SSS main office in Quezon City. He was just passing by East Avenue, he said, when he chanced upon members of Kilusang Mayo Uno (KMU) and Piston protesting the impending hike in SSS premiums, amid the little to no improvement in benefits and services.

Quirico paid premiums to SSS for 25 years, the monthly amount increasing as he moved up in his job. He retired as senior method analyst for refrigeration industries, in a now defunct company owned by the Araneta family. He said his monthly pension of P3500 is too pitifully inadequate. At their age, he and his wife, 78, both grapple with illnesses, he said. 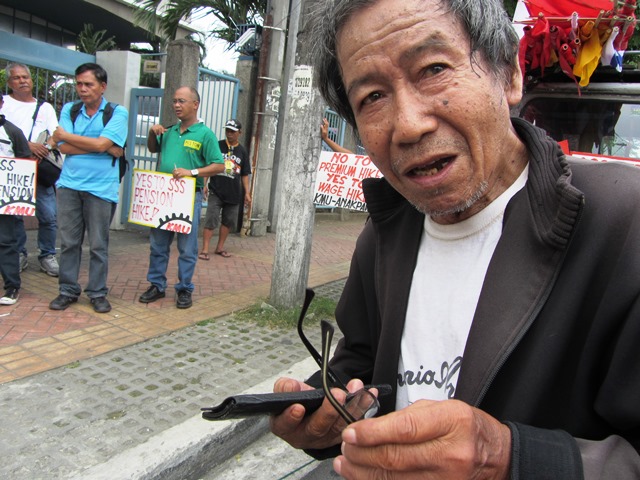 To support himself and his wife, he told Bulatlat.com that he still works as plumber for hire, often declogging pipes. Like him, another senior citizen asked to speak at the picket, asking why, after decades of hard work and painstakingly paying their monthly contribution to SSS, workers not only stand to get comparatively small benefits, they also have a hard time applying to get them. “We stand on long queues, we are asked to return for this and that document,” he sighed.

“Tales abound concerning many members whose money in SSS seem to just disappear when they get old,” Lito Luces, president of Pambato cargo forwarders’ union and LAND, a federation allied with KMU, said during the workers’ picket against the impending SSS premium hike. Luces said that to this day, he can’t forget a union member who had to file for a leave of absence numerous times to get from SSS the burial assistance for his mother. He still hasn’t received it when they commemorated his mother’s first death anniversary.

“When workers get sick and they approach SSS for help, they pass through the proverbial eye of the needle, just to get a loan or assistance,” said Edwin Gratuito, head of Piston QC chapter. Echoing the complaints of SSS members lining up at the assistance center, he said at their picket: “When workers approach SSS, they’re given the runaround, but when SSS has to raise premiums, they decide to do it just like that, without even reporting to us what happened to our money.”

SSS asked to explain where they bring the workers’ funds

Filipino workers feel their income dwindling, given the continuous price hikes that are unmatched by wage hikes, Gratuito noted. Organized labor’s demand for a substantial wage hike has languished in Congress for more than a decade now. And since last year, they condemned the Aquino government’s imposition of a new wage system that practically cuts down further the country’s minimum wages. Gratuito appealed to the Aquino government and leaders of SSS to not impose an additional burden like making them “pay higher SSS premium, when there are no marked improvement in SSS services.”

To do this to Filipinos reveal how thick in the face the Aquino government is, Gratuito said. He questioned the government’s use of the workers’ funds. He accused Aquino and the administrations before him of having used SSS funds as milking cow, funding the businesses of their cronies and funding their election war chest. 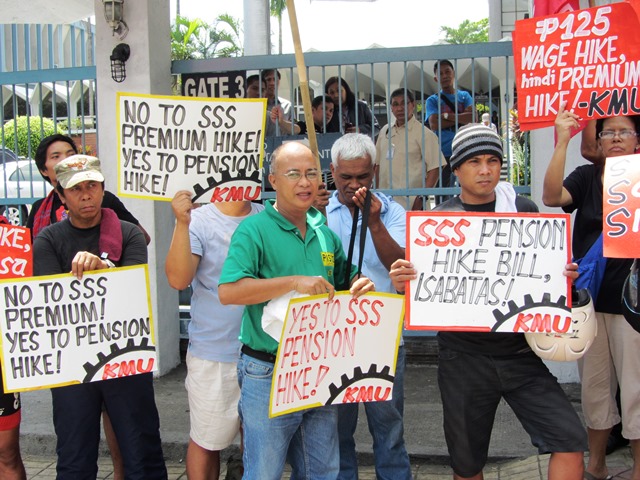 The Social Security System is the only thing workers rely on when they get old, or sick. According to George San Mateo, president of Piston, this agency should help members and not impose additional burden. He asked SSS why it has to hike premiums, when it’s not losing and by all indications, should have been raking it big in the investments it reportedly placed on big, profitable companies.

Recently, leaders of KMU led by vice-president Sammy Malunes agreed to have a dialogue with officials of SSS public affairs. But according to Malunes, it had been a frustrating dialogue because they cannot get any answer to their questions, such as what has the SSS done to the workers’ funds? Where has it invested the funds? How are the returns?

SSS is not losing, it has no competition, San Mateo said. All Filpino workers when employed are obliged to become members of SSS and pay the premium.

At the end of 2011, the latest SSS financial statement available in its website shows it has P289.1-billion reserves. Its income amounted to P25.7-billion in 2011. Yearly financial statements reveal healthy trend of increasing revenues, and revenues consistently exceeding expenses. 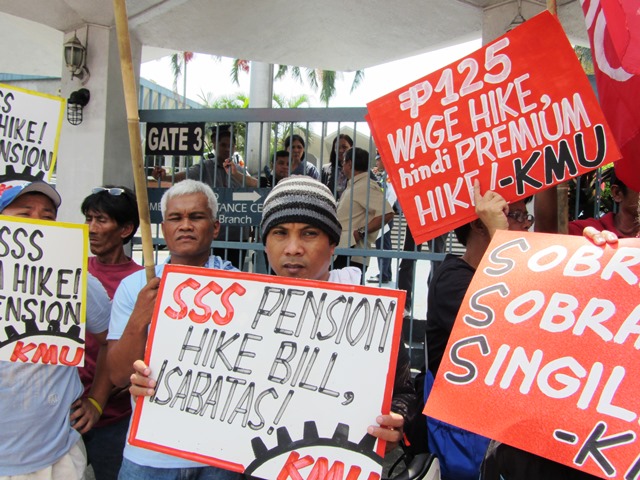