From now on, the KMU warned, the government will freeze minimum wages via its new wage system.

MANILA — The last tranche of wage hike for Metro Manila employees, granted in the form of a P10 Cost of Living Allowance (COLA), officially became effective since Nov 1. The government-backed Trade Union Congress of the Philippines welcomed it in a statement. It could be remembered that the TUCP filed a proposed hike with the Regional Wage Board early this year while other labor groups were demanding that these wage boards be scrapped.

For the progressive workers and youths, they only have stinging criticisms and ample warnings concerning the said wage hike.

The youth group Anakbayan said the wage hike has “no life at all.” Vencer Crisostomo, chairman of Anakbayan, said it is akin to alms and miles away from the P125 ($3.03) being demanded by the workers and the P993 ($24.07) Family Living Wage in 2011. The youth group cited the amount required to meet the daily family needs according to Ibon Foundation.

Workers dramatize the impact of two-tier wage system on living wage, Nov 5, in front of the House of Representatives em>(Photos by Marya Salamat / bulatlat.com) 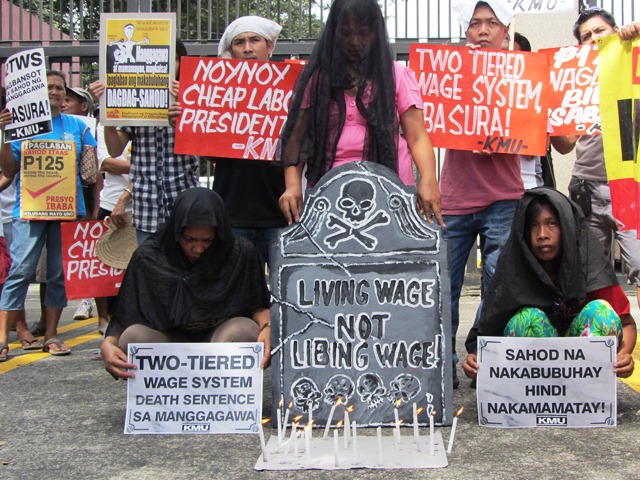 Even the timing of the wage hike’s implementation, Nov 1, served as proof for the youth group of the little value of the said hike. They also described the hike as “ghostly,” since it will not be real as “most employers do not pay the minimum wage.”

For the labor center Kilusang Mayo Uno (KMU), which, for more than a decade, has led the campaign for an across-the-board P125 ($3.03) wage hike, this “last wage hike” is even worse than being a ‘dead wage hike’ or a ‘ghost wage hike.’ They regard this hike as something akin to a killer and an undertaker of the minimum wage.

This COLA hike is the last ‘increase’ in the minimum wage under the newly implemented Two-Tier Wage System. From now on, the KMU warned, the government will freeze minimum wages via its new wage system.

In Metro Manila, the same wage order that granted a total of P30 ($0.70) COLA this year (in instalments, with this P10 [$0.24] COLA as the last tranche) also brought the start of two-tier wage system. This new wage system is seeking to supplant the current mandatory minimum wages with lower “floor wages.”

For the first five years, the labor department said there would be no more hikes in minimum wages. Instead, they have imposed lower than minimum floor wage rates per region, where the increases to be decided later will depend on how much the workers’ wages need increasing to get near the decided amount of floor wage.

The mandatory floor wage, now the “new minimum wage” according to wage experts of the labor department, is the first tier. The other tier, productivity-based and to be determined largely by companies, is not mandatory.

Unionists warned that it would be very tricky for workers to be able to enjoy this second tier, considering that experiences have shown how companies shun unions and collective bargaining, plus, employers have been utilizing more non-permanent contractual workers.

As Congress opens this Monday, workers from the KMU held a picket protest at its gate to urge the legislators to pass the P125 ($3.03) across-the-board wage hike bill (House Bill 375).

Meanwhile, a progressive partylist representative has urged Congress to investigate the implementation of wage laws in the country. Makabayan senatorial candidate Teddy Casiño reiterated Sunday his call for Congress to look into the “inhumanely low wage rates imposed by the Regional Tripartite Wages and Productivity Boards following the announcement of a measly P10 ($0.24) wage increase in the form of Cost of Living Allowances (COLA).”

Casiño is the author of House Resolution no. 1238 titled: “A Resolution Directing the Committee on Labor and Employment to Conduct an Investigation, in aid of legislation, on the Implementation of Republic Act no. 6726 or Wage Rationalization Act in view of the Inhumanely Low Wage Rates being Imposed by the Regional Tripartite Wages and Productivity Boards.”

“The low regional wage rates have not uplifted the lives of Filipino workers nor have ensured them a decent standard of living. With the simultaneous price hikes during the past months, Filipinos are further burdened into trying to make ends meet,” Casiño said.

The senatorial aspirant also warned that the “measly” wage hike cannot even cover the announced increase in train fares starting next year. He said the Aquino government “may take pride in giving alms and dole-outs to our citizens, but what workers really need are regular employment and a just wage system.” He found it is “preposterous” that the Philippines has around a thousand wage levels differing per region and per industry.

“This inquiry is long overdue. We filed HR 1238 on May 11, 2011. In the light of this latest development,” he said, “we hope the Labor Committee can schedule a hearing immediately.”

Outside the House of Representatives, as the workers’ picket protest was ongoing, Elmer ‘Bong’ Labog, chairman of KMU, announced that on Nov 20, more workers under the Act2Win are set to troop to the main office of the labor department in Manila to protest its cheap labor policy.