MANILA – The opposition to Aquino’s new wage system appears set to escalate as Labor Secretary Rosalinda Baldoz announced last week the implementation of the two-tier wage system in 11 regions in the country.

Already, diverse labor groups have formed an alliance to press for a significant wage hike, vowing to hold mass actions against government policies that negate that. In Congress, Anakpawis Partylist Rep. Rafael Mariano filed a resolution this week seeking to investigate the two-tier wage system. 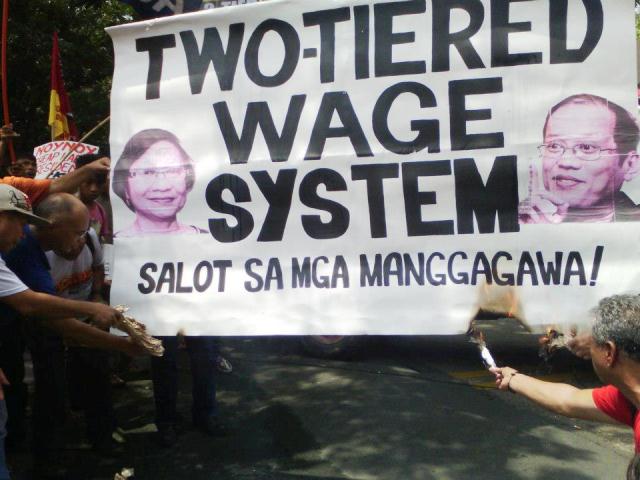 Labor groups particularly in Region 4-A or Calabarzon, the first region that piloted the wage system, have warned other workers about the new wage system, which, they said, did not really give wage hikes, but instead lowered the amount of mandatory wages.

The floor wage, the DOLE said, is based on “the current poverty threshold, average wage, and socioeconomic conditions” in the country’s regions. But the poverty threshold is based on the government’s “least cost” food bundle computation. It pegged the amount supposedly necessary for a tolerable standard of living at P46 ($1.09) per person per day in 2009, after it lowered it from P52 ($1.24) using the older method of computing the poverty threshold.

Struggling for a legislated “significant wage hike” for more than a decade now, many labor groups led by the Kilusang Mayo Uno (KMU) rejected the wage cuts. At the gates of the House of Representatives, members of KMU and the Confederation for Unity, Advancement and Recognition of Government Employees (Courage) have held rallies the past few weeks.

“The 15th Congress has slept on bills that will give workers and government employees a much-needed significant wage hike. We will not allow this Congress to end without approving these bills,” said Elmer “Bong” Labog, chairman of KMU.

The said labor groups have been urging Congress to approve the House Bill 375 and 3746 respectively, both authored by Anakpawis Partylist Rep. Rafael V. Mariano. These bills seek to legislate a P125 ($2.97) across-the-board wage increase and a P6,000 ($142) increase in private and public sector employees’ minimum monthly pay.

“Through the years, workers’ wages and government employees’ salaries have lagged behind the amount needed by our families to live decently. We know that capitalists and the government can afford to grant us a significant wage hike,” Elmer “Bong” Labog, chaiman of KMU, said at their latest rally in Congress last Tuesday September 18. In the rally, members of KMU also burned a sign that read “Two-Tiered Wage System: Salot sa Manggagawa” (2-tiered wage system: scourge of workers).

Seeing through tiers of ‘deception’

The labor department’s assurances about the new wage system have spooked rather than soothed the labor groups who are now beginning to question it. At a forum on the two-tier wage last week sponsored by the new labor alliance Act2win (Action Against Contractualization and Towards a Significant Wage Increase Now!), the director of the National Wages and Productivity Commission Chacha Lobrin-Satumba told the unionists that she will ensure that this wage system “will not be anti-worker.”

But the more she and lawyer Jamie-Lyn Jamias-Garcia, officer-in-charge division chief of NWPC Wage Research and Policy Division, discussed the two-tier wage system, the more it became clearer to unionists at the forum that it is indeed anti-worker. The hissing and murmuring in the room grew louder and when they spoke, unionists decried how the two-tier wage system as designed by the Aquino government is anti-worker and in favor of employers:

She thus confirmed the suspicions of unionists and labor rights advocates that, after the Aquino government’s much-publicized claims that Filipinos’ wages are “high,” they are now seeking to cut it down. But because the government cannot legally just slash the already prescribed minimum wages rates, they created the floor wage. 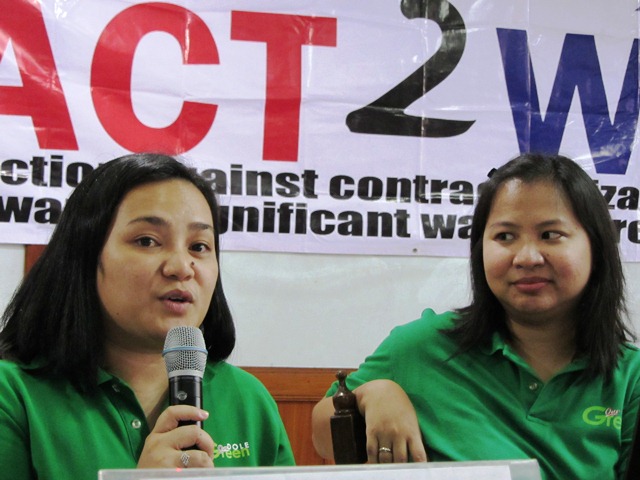 “The fact that it’s called floor wage should tell us we’re being mindset to accept a much lower wage,” said Charlie Arevalo, spokesperson of Koalisyon ng Progresibong Manggagawa at Mamamayan in Makati and Pasay. The minimum is supposed to be the lowest wage already, he said, but the government crafted an even lower wage.

Floor wages determined by the regional wage boards are designed to be lower than the current minimum wages, except in the National Capital Region where floor and minimum wages are the same. Citing an “ideal structure” of the two-tier wage, NWPC’s Garcia disclosed that floor wage should “at least be 75 percent of the average wages in a region.”

In the “ideal structure,” companies are supposed to be giving productivity-based pay. But as former Anakpawis Partylist Rep. Joel Maglungsod asked, “Where in the Philippines did you experience a capitalist asking the workers’ representatives to ‘come, sit down, and let’s talk about raising your wages?” Most experiences pointed to the opposite. Unionists said their employers would rather lay off workers once they form unions and ask management to negotiate for a new collective bargaining agreement.

2. ‘Two-tier wage system is an incentive for massive lay-offs and contractualization’

The two-tier wage system leaves the minimum wage-earners untouched – freezing their wages and granting increases only for those who are earning below the floor wages. The labor department may look at it as a way to remove wage distortions. But that is because the minimum wage earners may soon be out of employment.

Unionists decried that the floor wage created by the new wage system is “an incentive for massive layoffs.” Why pay the minimum wage when you can pay the lower floor wage?
As a leader of the KMU-affiliated Drug and Food Alliance warned, today’s contractual workers are minimum wage-earners. In their next contract, they would be floor wage-earning workers.

Of all workers, it is the contractual workers who have little to no bargaining power for productivity-based pay.

The two-tier wage system, said the labor department’s wage and productivity officials, is crafted to address the “unintended consequences” of the Wage Rationalization Act (RA 6727). These include the exemptions and the persistent violations or non-compliance in paying the minimum wages. 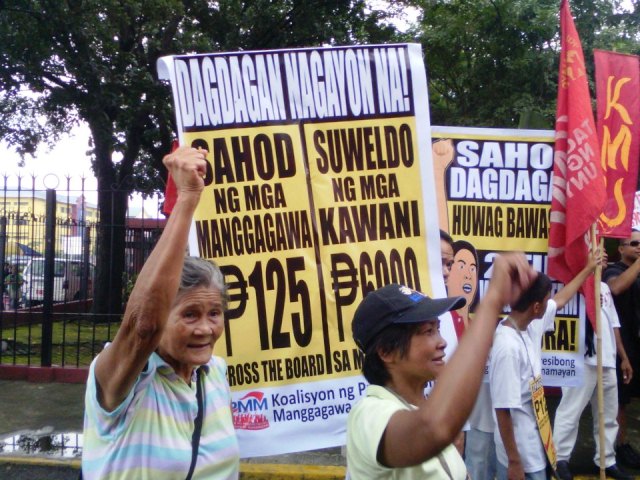 But as unionists pointed out, instead of strictly enforcing their wage orders, the labor department, through the two-tier wage system, has bowed down to the employers’ violations of the minimum wage law. “It’s like saying, ‘since you don’t want to implement the minimum wage law, okay, we created a floor wage nearer the average pay you’re giving to the workers’,” Anna Leah Escresa, executive director of non-government labor thinktank EILER said.

In Region 4-A where the Aquino government piloted since May the two-tier wage system, the wage board imposed a floor wage that union leaders said is “lower than the average wage being paid, in violation of the minimum wages.”

Union leaders also expressed doubts that the labor department could correct the “unintended consequences” such as non-compliance and violations of the Wage Rationalization Act. Satumba of NWPC said the labor department has at last managed to increase its budget and hire 272 additional labor inspectors.

“Is the solution just increasing the labor department bureaucracy?” asked a leader of KMU-affiliated ADLO.

“One problem with the Wage Rationalization Act is that it created too many minimum wages. But the two-tier wage system only added to that,” said the ADLO leader. Indeed, if the government has failings at enforcing the Wage Rationalization Act when it is just the regions’ minimum wages that it has to monitor, how much more after it created two tiers of wages and disperse the wage setting to company levels?

“It is appalling how President Aquino has endorsed DOLE’s double whammy versus workers’ rights by institutionalizing a deceptive two-tiered wage system, which further undercuts the minimum wage of workers and legalizes wage freeze amid the incessant increases in the prices of all basic commodities,” said GWP Rep. Emmi De Jesus. De Jesus co-authored with Anakpawis Partylist Rep. Mariano the resolution urging to investigate the two-tier wage system. And the pending bills seeking to increase across-the-board nationwide the minimum wages by P125 ($3) for private sector and P6,000 ($143.96) for the public sector.

“The government is intensifying the implementation of its Cheap Labor Policy in order to please big foreign and local capitalists to the detriment of workers,” Labog of KMU said. As the labor center allies with other labor groups to oppose this, more foreign investors such as some big-ticket Japanese manufacturing firms are reported to be locating in the Philippines, attracted by low wages and high unemployment here. 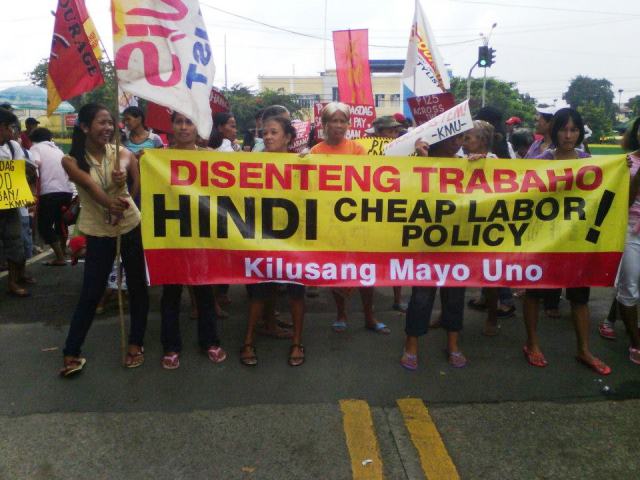 Meanwhile, a research shattered the Aquino government’s claim that Filipinos are already receiving higher wages. Based on a UBS survey of workers’ earnings in cities around the world, where they compared how long (or short) workers have to work to be able to buy a Big Mac hamburger, they found out that Filipinos are among three other nationalities who have to work the longest before they can earn enough to buy a Big Mac.

A 2012 study of the International Labor Organization (ILO) has also placed the Philippines’ wage as the third lowest among 72 countries. Before the imposition of lower floor wages, the ILO has pegged the average monthly wage in the Philippines at US$279 or only 19 percent of the world’s average.