You Are Here: Home → 2012 → May → 4 → Aquino urged to stop introducing another wage freeze scheme

“Under the new wage system, companies get more freedom to tinker with workers’ wages in the guise of raising productivity levels.” – EILER

MANILA – In a country where the working people’s real minimum pay has flattened over the past decade (see chart from Ibon Phils.), a new wage system about to be introduced by the government is currently spooking labor advocates.

In another looming wage system, another tier will be added to regional (and sometimes provincial) minimum wages, which also differentiate rates between agricultural and non-agricultural workers, plantation and non-plantation.

The Ecumenical Institute for Labor Education and Research (EILER), a labor think tank, cautioned the Department of Labor and Employment (DOLE) and business groups against pushing the two-tiered wage system, saying it could pull down the already meager incomes of Filipino workers instead of raising compensation levels. 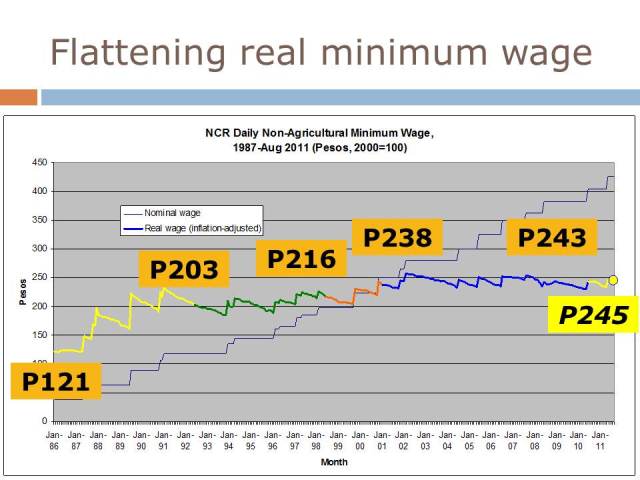 The Region IV-A wage board has recently granted a P2 to P90 ($2.13) wage increase with “productivity allowance,” a mode which EILER warns as a “transition to the new wage system that is primarily based on productivity.”

EILER said the two-tiered wage system, which provides for a productivity-based pay on top of a mandatory floor wage, will make wages even more vulnerable to downscaling as companies seek to raise productivity amid the lingering demand slump from external markets.

Giving employers more room to cut back on wages

Companies operating in the Philippines often have exclusive control over its measures of productivity. And “productivity is determined not just by labor input but by other factors too, for example the level of technology used in production,” said Anna Leah Escresa, executive director of EILER.

“Under the new wage system, companies get more freedom to tinker with workers’ wages in the guise of raising productivity levels,” Escresa said. She suspected that companies can “surely get away with arbitrary computations on productivity to justify a downscaling of pay schemes or to deny a wage hike.” 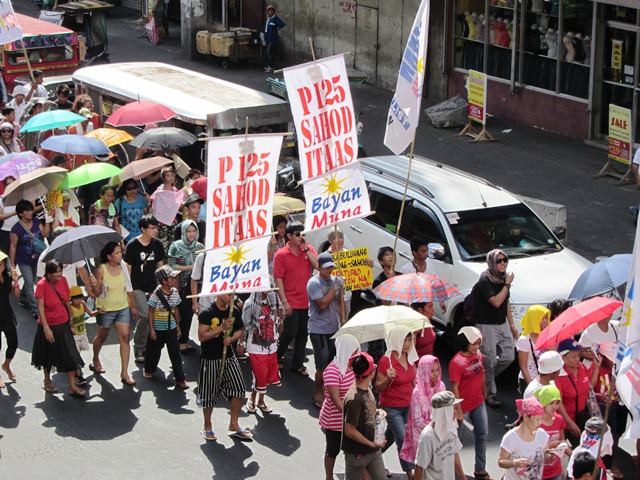 A portion of May 1 march in Manila (Photo by Marya Salamat / bulatlat.com)

This freedom given to employers dovetails an earlier labor department advisory which allows establishments to perform self-evaluation on whether they are observing or not the prescribed working conditions, including health and safety measures in the workplace. This freedom has unfortunately failed to stop deadly accidents in the workplace, especially victimizing contractual workers, as revealed in accidents in shipyards where self-evaluations had been positive.

As EILER suspects, there is little reason to believe that the establishments would provide a more accurate productivity report, if that could lead to its being forced to hike its workers’ wages.

The labor thinktank also expressed fears that the new wage system could further undermine the workers’ gains through collective bargaining negotiations. The new wage system, when in place, could be cited by companies to forestall wage demands.

In the Philippines, the number of unions has been shrinking over the years, since the government and companies have colluded to crack down on unions and strikes and in implementing contractualization. The drop in number of unions has resulted in fewer workers covered by collective bargaining agreements. And the proposed new wage system will make matters worse.

Productivity not just the workers’ burden

Compared to other Asian countries, the Philippines has a very low level of productivity due to its low level of technology used, noted EILER. Still, profits are being generated and each year, the National Statistics Office would report an increase in productivity. All these can only come from increased productivity of the working people.

Under the neo-liberal policies adopted by the Philippine government, companies based in the Philippines have increasingly been given more leeway in making wages more flexible, or more freely decided and tinkered with by employers. It happens as the labor department issued advisories and orders that outline how companies can legally implement outsourcing and contracting out, resulting in the hollowing out of the employed regular and unionized and the rise of non-unionized permanent contractuals.

Today, estimates vary about the size of non-regular employees, but in many cases they outnumber the regular.

Rather than invest in new technologies in an effort to raise productivity, it has been an observed tendency for companies operating in the Philippines to force employees to choose between getting higher wages and keeping their jobs. This has been the justification recently of President Benigno “Noynoy” Aquino III in rejecting the demand for a P125 ($2.96) daily wage hike nationwide. Succeeding governments have asked workers to “sacrifice first or increase productivity first,” before getting a wage hike.

“The danger of a productivity-based wage system is that as companies race to increase their productivity levels, workers are forced to race with each other in offering the most output at the lowest pay or shortest time. This increases corporate profits by several fold,” Escresa said.

Currently, wage hikes are determined on a regional basis by regional tripartite wages and productivity boards (RTWPBs) with token representation of workers. Labor groups have already repeatedly rejected the current system, blaming it as the reason why only measly pay hikes not exceeding P26 ($0.62) had been granted since 1989.

The new wage system, when implemented in full, “is an intensification of the regionalized wage system since productivity-based wage fixing will spawn a multitude of new pay scales that differ not just on a regional basis but on an industry and company basis,” said EILER.

The progressive Filipino labor movement has been pushing to undo the fragmenting impact of regionalized wage-setting by pushing for a legislated, across-the-board wage hike. But while the said poposal is still hurdling obstacles in Congress and was outright rejected by President Aquino, here comes another wage-fragmenting system.

Aside from its likely downward pull on wages, “A highly fragmented wage system based on productivity will be used by capitalists as tool to further fragment labor and subvert workers’ solidarity in asserting for a nationwide and substantial wage increase,” Escresa warned.

The labor thinktank urges the Aquino government to drop its plan of further making flexible the system of wage setting. Instead, it urged Aquino to heed the workers’ clamor for a legislated nationwide wage increase.