You Are Here: Home → 2012 → September → 20 → Labor alliance against contractualization, for a meaningful wage hike, formed

Labor alliance against contractualization, for a meaningful wage hike, formed

“They [big corporations] have, for years, raked in profits by pressing down workers’ wages and pushing back the hard-earned gains of the country’s labor movement. They have been able to widen the disparity between the affluent minority and the poor and hungry majority in the country – a situation that violates the principles of social justice.”

MANILA – For the first time in years, Filipino labor groups that used to regard each other as rivals and on different positions in the labor spectrum are banding together for a common cause. They say they want to push back the government-supported policy of contractualization and demand for a “significant wage hike.”

Late last week, a number of labor federations and trade unions banded together in an alliance called ACT2WIN, or Action against Contractualization and Towards a Significant Wage Increase Now. In a press conference in Manila last Friday Sept. 14, leaders of these labor groups vowed to fight together for the rights to security of tenure and a living wage.

“We demand a significant wage hike, one that will bring current wage levels closer to the living wage. We demand the junking of contractual employment schemes, those which erode employer-employee relationships and result in lower wages and denial of benefits and job security of workers,” their unity statement said. 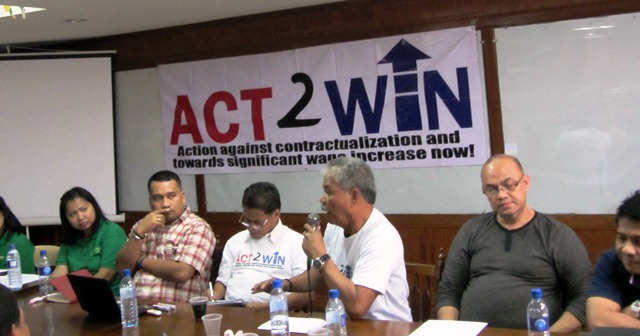 Leaders of Act2Win at a wage forum with heads of the labor department’s wage and productivity commission (Photo by Marya Salamat / bulatlat.com)

This coming together was prompted by their mutual recognition “that workers need to unite to fight for our demands, such as that for a significant wage increase and the junking of contractual employment,” said Elmer “Bong” Labog, chairman of KMU. He said the likelihood of attaining these demands “can only be brought about by our collective action.”

At a forum on the two-tier wage system that followed the formal launch of ACT2WIN, Oliver Mondigo, member of the board of the Federation of Free Workers, expressed optimism that more workers will benefit from this joining together of various labor groups. He said, in Filipino, “the KMU’s banding with the FFW is a key to reaching out to millions of workers who need to be organized,” especially the contractual workers.

Sonny Matula, president of FFW, criticized the practice of contractualization as “unconscionable and shocking to a civilized society.” In this scheme, he said, “workers are exploited to pursue maximum profit, disregarding their rights.”

“With the present rampant contractualization practice and precarious work, the workers need to assert the constitutional right to security of tenure in their work,” said Matula,. He shared that workers “are further alienated from their work because even their big employers disown them by assigning or contracting them out to manpower agencies or manpower cooperatives.”

Different labor leaders have variously estimated the extent of contractualization in the country to 60 to 70 percent of the total workforce in private companies. Even the public sector employees’ confederation, COURAGE, and the Alliance of Health Workers, have been saying before that their ranks are also being replaced by contractual workers.

The newly formed group also questioned the legality of the government’s contractualization policy. ACT2WIN leaders cited Article 280 of the Philippine Labor Code. This states that work that is necessary and desirable to the usual business or trade of an employer is regular work and that work for a year, continuous or not (as long as it totals a year), is also considered as regular work and thus, workers in these lines of work are covered by job security.

This article, they said, is the most ignored by the contractualization schemes allowed or supported by the government. They also said the Supreme Court “has already rebuffed” the rampant “5-5-5” contract work scheme. In this scheme, workers are contracted to work for only five months, rehired for another five months for up to five times, depending on work availability and if they were liked enough by the company bosses or supervisors.

The newly-formed alliance blamed the “severe hardships of workers and their families on the spread of contractualization” and on the continued increases of prices of basic goods and services which, they said, “have not been met with a corresponding increase in workers’ wages.”

For the drastic price hikes through the years, they blamed, in turn, the government’s imposition of neoliberal policies. Act2win said privatization, for example, has increased the prices of basic utilities. When transferred to private hands, these utilities, “which should be provided to workers and people at affordable prices, if not for free,” became more expensive because of the private owners’ desire for profit.

Act2win also criticized another kind of privatization, called corporatization of social services such as health and education. The newly formed alliance said corporatization has made these services “inaccessible to workers, their families and the people.” The alliance also blamed deregulation, another neo-liberal policy, for “allowing industry cartels to increase prices at will.” The biggest example is the oil industry deregulation, since hikes in prices of oil products also affect a lot of other products.

“Liberalization has made us even more dependent on imported goods, thus killing local industries, which results in massive layoffs,” Act2win also said.

Demands for a significant wage hike

The increased prevalence of contractual employment, said Act2win, has meant the unbearable pressing down of wages and denial of benefits and job security, as well as attacks on labor rights for the majority in their ranks. Contractualization, they said, has drastically reduced the number of unionized workers, especially those covered by collective bargaining agreements.

“Because contractuals can easily and legally be removed from work on the flimsiest of reasons, they are laid off once it is found out that they are joining and forming unions. They have, therefore, been discouraged from joining unions, a right they should enjoy. Where workers’ unions exist, the increasing number of non-unionized contractuals has undermined workers’ right to strike and therefore, their right to collectively bargain with employers,” the Act2win said.

Because of contractualization and what labor rights advocates call as combined hostility of the government and employers to unions and strikes, there are only 1.78 million unionized Filipino workers to date, of which only 229,000 are covered by collective bargaining agreements. This means that only 1 out of every 12 wage-and-salary workers is unionized, and only 1 out of 8 unionized workers are covered by a collective bargaining agreement.

In calling for an end to contractualization and the regime of cheap wages, Act2win said their calls are just, and that employers in the country, especially the big ones, are capable of granting it. “They have, for years, raked in profits by pressing down workers’ wages and pushing back the hard-earned gains of the country’s labor movement. They have been able to widen the disparity between the affluent minority and the poor and hungry majority in the country – a situation that violates the principles of social justice,” said their unity statement.

They called on all sectors of society –their fellow workers, sectoral organizations, personalities, church people, politicians – to support their calls “as the upliftment of workers, who produce the country’s wealth, would lead to the upliftment of the entire country.”