You Are Here: Home → 2012 → May → 14 → Workers call labor department’s order against contractualization ‘a hoax’

MANILA— Employees who get ‘endo’ (end of contract and thus end of job) after four to five months still populate the employed in the Philippines, six months after the labor department issued an order that it claimed would have ended contractualization. It is the employment scheme that has helped employers cut down wages, benefits and undercut unions, but which workers have been complaining of as illegal and anti-worker.

When the labor department issued the Department Order 18-A Series of 2011 last Nov, it said it will end the prevalent 5-5-5 employment scheme where workers are hired for just five months and then, after the end of their five-month contract, they are rehired for another five months. Six months have passed since the department order was issued, the KMU said, the Department of Labor and Employment still failed to effect the regularization of contractual workers.

To mark the six-month confirmation of the uselessness of Department Order 18-A Series of 2011 in protecting job security, workers led by progressive labor center Kilusang Mayo Uno (KMU) picketed the labor department’s office Monday May 14 and condemned the Aquino government for promoting the exploitative employment scheme rather than seeking to stop it.

It’s been six months and we’re still not seeing contractuals being regularized en masse,” said Roger Soluta, secretary general of KMU. Instead, he noted that “capitalists have just shortened contracts with service contractors or fired workers before they reach five or six months.” 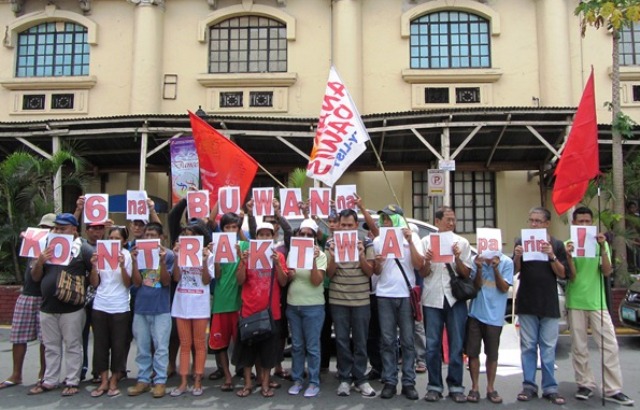 Members of Kilusang Mayo Uno stage a picket in front of the Department of Labor and Employment, branding as hoax the Aquino administration’s order against contractualization.(Photo by Marya Salamat/ bulatlat.com)

Contrary to the supposed intent of the labor department order, the progressive labor center said it is actually “a license for contractual employment.” It is not the first time the DO 18, or an order with similar content, was released by the labor department. In all its versions, though, labor groups complained that its supposed role in banning unfair employment schemes is just an empty promise. The KMU calls its promise “a hoax.”

“It was easy to see that DOLE’s hype for regularization is just a hoax,” Soluta said. He pointed to workers’ experience in Philippine Air Lines, where the Aquino government helped the Lucio Tan-led airline to ram contractualization down the throats of at least 2,600 more regular employees.

Contractual workers in the Philippines work under worse conditions compared to their regular fellow workers. They receive lower wages and little to no benefits, which periodically stop, too, along with their work contract. Because of their pre-defined length of employment, they have narrower room for forming unions, the KMU and various labor advocates have said numerous times before. Worse, when contractuals form unions, they are more easily fired.

The labor department’s order joins the regional wage boards in the labor groups’ list of anti-worker “instruments.” The protesters said during their picket that the department order is only being used by employers to legally implement wage-cutting employment schemes. The regional wage boards, they also said, are formed not to decide wage hikes but to slow or cut it down.