The Department of Agrarian Reform is seemingly caught between doing what the Supreme Court directed them to do and the dictates of the Cojuangco family.

MANILA –Hacienda Luisita farm workers asked the Supreme Court to direct the Department of Agrarian Reform to immediately hire a firm that would audit the disputed $32.44 million, the proceeds of the sale of Luisita’s 580 hectares.

“This has already been decided in 2011. But farm workers are made to suffer this long and tedious process,” Lito Bais, acting president of United Luisita Workers Union and chair of Unyon ng Manggagawa sa Agrikultura, told Bulatlat.com.

In its decision on Nov. 22, 2011, the Supreme Court ordered for the distribution of Hacienda Luisita. Its decision also directed DAR to audit the $32.44 million, which was part of the proceeds when the Hacienda Luisita management sold 580 hectares to Rizal Commercial Banking Corporation (RCBC) and Subic Clark Tarlac Expressway (SCTEX). 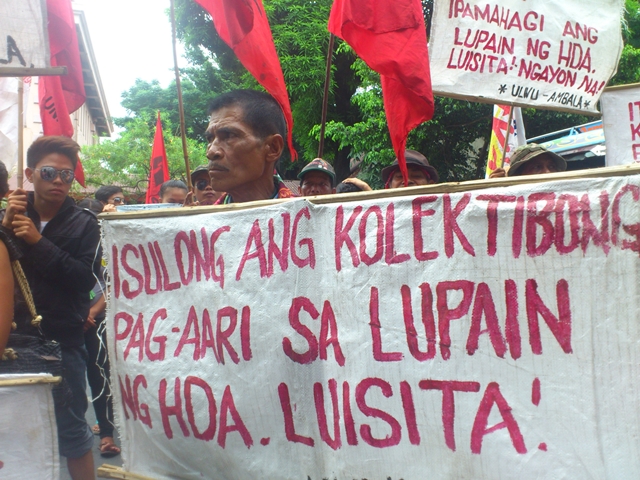 But last May 27, 2013, the Presidential Agrarian Reform Council and DAR filed an urgent motion before the Supreme Court to clarify the process of hiring a firm to audit the $32.44 million. The 2011 decision read that auditing of the disputed money should be “approved by the parties.”

Ambala filed a motion to disqualify Reyes Tacandong and Co. from doing the external audit of HLI and Centenary Holdings. They also filed a motion before DAR to disqualify KPMG and Manabat San Agustin Co. The group expressed their doubts on these auditing firms because they were previously associated with Sycip, Gorres, Velayo and Co., Philippines (SGV), which was the external auditor of HLI from 1989 to 2006.

DAR, according to Ambala, did not act on these motions to disqualify auditing firms that were identified with HLI. But when the five farmworkers groups filed a manifesto endorsing Ocampo, Mendoza, Leong, Lim and Co (OMLL), DAR turned to Supreme Court to clarify what “approved by the parties” meant in the 2011 decision

Bais said if DAR wants to work on getting a unanimous vote on which auditing firm to hire, “the process will not end. The HLI (management) would keep on voting against auditing firms until they get the one who would serve their interest.”

“Of course, they would not want to be audited,” Bais told the media during a protest action in front of Supreme Court on June 11, 2013.

Ambala will file a petition before the Supreme Court for consideration during the next en banc session. 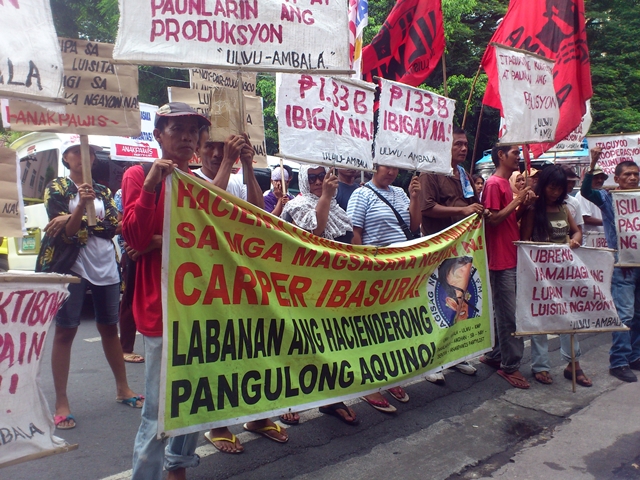 Bais said DAR is seemingly caught between doing what the Supreme Court directed them to do and the dictates of the Cojuangco family. Its officials, he added, are “like spokespersons of the Cojuangcos.”

“Should HLI even be a party on this case?” Bais said.

In their petition, Ambala said, “Under the principles of accounting and auditing, the party to be audited is supposed to be deprived of the right to select or choose the auditing firm that will conduct the audit of its own books.”

“This is precisely to maintain the independence of the accounting firm and see to it that the process is not tainted by irregularity. This is also necessary to prevent allegations of irregularity in the conduct of the audit,” the petition read, “This is very elementary. The public respondents should have known that. And that is the basis of Ambala for asking that HLI be excluded from the parties that would select the auditing firm.”

DAR, according Ambala, has not acted on the motion to disqualify HLI from selecting the auditing firm.

“Even if Hacienda Luisita has not yet been distributed, we gave parcels of land to our members. We need start up money now that the planting season is nearly at hand,” Bais said.

Bais said DAR’s move to turn to the Supreme Court is its way of making the legal process longer. “Selling of that parcel of land is illegal. It needs to be returned to the farmers,” he added.

Jobert Pahilga, lawyer of Ambala, told the media during the protest action that the farmers groups are not behind the delay of the hiring of the auditing firm. Instead of pouring their time and attention on who should be the parties for this case, he urged DAR to look into the more than 900 hectares of land that were not included in the valuation made by the Land Bank of the Philippines.

In their statement, Pahilga said that LBP’s valuation read that there are only 3,396 hectares that would be distributed to farmers instead of 4,335. “Missing is 939 hectares,” the statement read.