“A right with no remedy is not a right at all.”

Speaking before members of the National Union of Peoples’ Lawyers (NUPL)-National Capital Region chapter, Puno said there is a new trend in jurisprudence challenging the traditional concept of non-enforceability of socio-economic rights. He cited the decisions promulgated by the Constitutional Court of South Africa, the Supreme Court of India and several United Nations agencies.

Socio-economic rights, according to Puno, include labor-related rights, right to health, right to housing, right to education, right to food and cultural rights.

In the Philippines, Puno noted that socioeconomic rights are embedded in the 1987 Constitution and the previous Philippine Constitutions but “they are no better than paper rights.”

“They (the poor) cannot go to any government authority – to the legislature, to the executive, to the Supreme Court – and demand that socio-economic rights be implemented,” Puno said. “A right with no remedy is not a right at all.”

Puno explained that the Philippine government views socioeconomic rights in the traditional sense that, unlike civil and political rights, they are not demandable.

The former chief justice said President Benigno Aquino III vetoed two bills for the marginalized sectors — the Magna Carta for the Poor and the Internally Displaced Persons Act — due to a number of reasons, which include the understanding that socioeconomic rights are not demandable from the state and the lack of funding to support the enforcement of these rights. 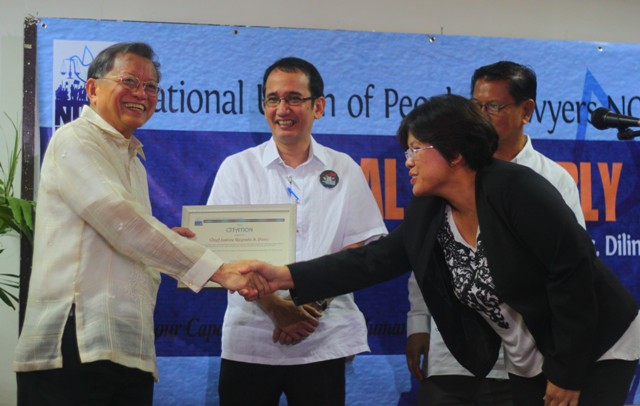 Puno added that the SC itself upheld this kind of concept in its decision dismissing the petition against tuition hikes, which, he said, was a petition premised on the right to education, a socioeconomic right.

Puno discussed lengthily the Court of Republic of South Africa v. Irene Grootboom and Others .

Grootboom and the other respondents lived in an informal squatter settlement called Wallacedene. In its decision, the Constitutional Court of South Africa described the conditions of the people living in Wallacedene: “A quarter of the households of Wallacedene had no income at all, and more than two thirds earned less than R500 per month. About half the population were children; all lived in shacks. They had no water, sewage or refuse removal services and only 5% of the shacks had electricity. The area is partly waterlogged and lies dangerously close to a main thoroughfare.”

Puno said the landmark decision noted that the government plan did not take into account the basic needs of the homeless people for temporary shelter. He said the Constitutional Court of South Africa found the state’s housing policy as unreasonable and unconstitutional.

The decision, Puno said, eliminated a distinction between civil and political rights and socioeconomic rights with their respect to demandability from the state.

The former chief justice said everybody should take part in the endeavor to help the “roofless, the shirtless, and the shoeless in our society.” He called on Filipino lawyers to fight the traditional mindset against the enforcement of socio-economic rights. “One way is to exert all efforts to change our existing laws and decisions of the court still clinging to the traditional concept that the socio-economic rights of our people cannot be demanded from the government as a matter of right,” Puno told the NUPL members.

Reacting to Puno’s speech, Roneo Clamor of human rights Karapatan said the urban poor in the Philippines, like those in South Africa, are also suffering the same fate.

Clamor noted that informal settlers fighting for their right to shelter are being arrested, detained and some killed. He cited the demolition of homes in Silverio Compound in Parañaque City that claimed the life of one man and led to the arrest of scores of residents. “Some of them are still in jail,” Clamor said in Filipino.

In an interview with Bulatlat.com, Puno said the people have the right to housing and that no eviction should be violent.