This is the call of children as the war in Zamboanga continues and casualties are increasing. Children and child’s rights organizations gathered in a peace and solidarity action on Friday, Sept. 27 at the Bantayog ng mga Bayani grounds. They carried banners bearing calls such as “Genuine peace in Mindanao, we want it now!” and “AFP go away! Moro children want to play!” 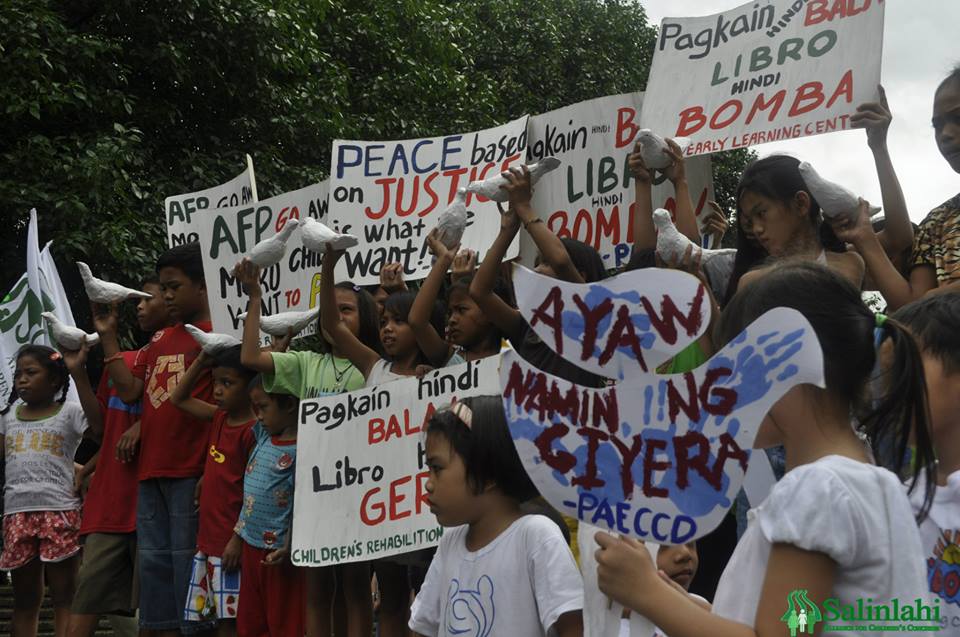 “We, from different child rights organizations – children and child rights advocates – join hundreds of thousands of fellow Filipinos in condemning the armed battle between the Armed Forces of the Philippines and the Moro National Liberation Front (MNLF), which negatively impacted on the lives of thousands of children in the southern city of Zamboanga,” said Kharlo Manano, acting secretary General of Salinlahi Alliance for Children’s Concerns. 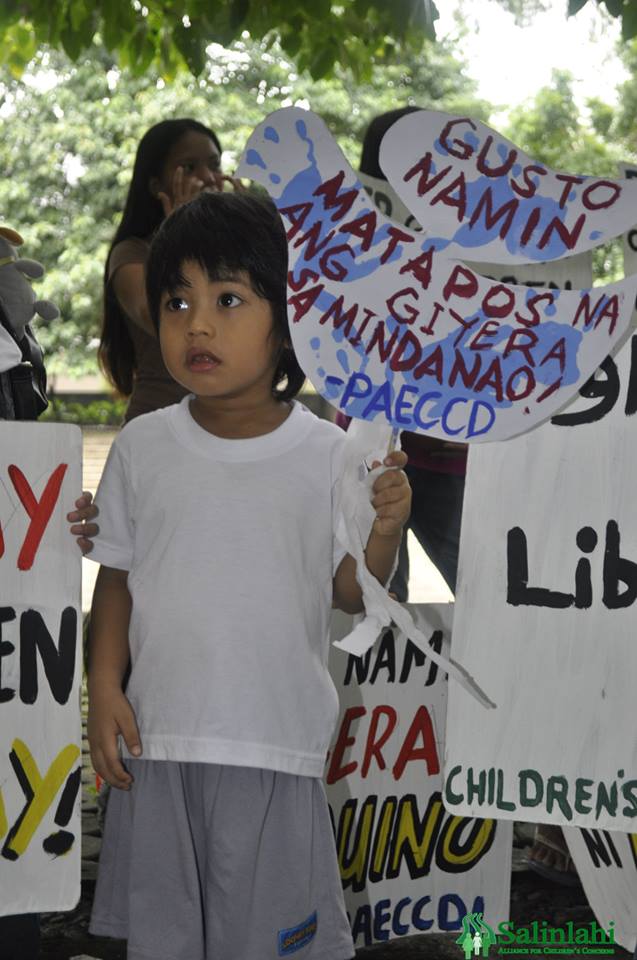 For child rights group, the more than two week crisis only shows President Benigno S. Aquino III’s disregard for the life and security of children and their families as the military attacked MNLF fighters in a highly-populated area. “It is very enraging that already two children lost their lives while many are still living dangerous and disrupted lives,” Manano added. 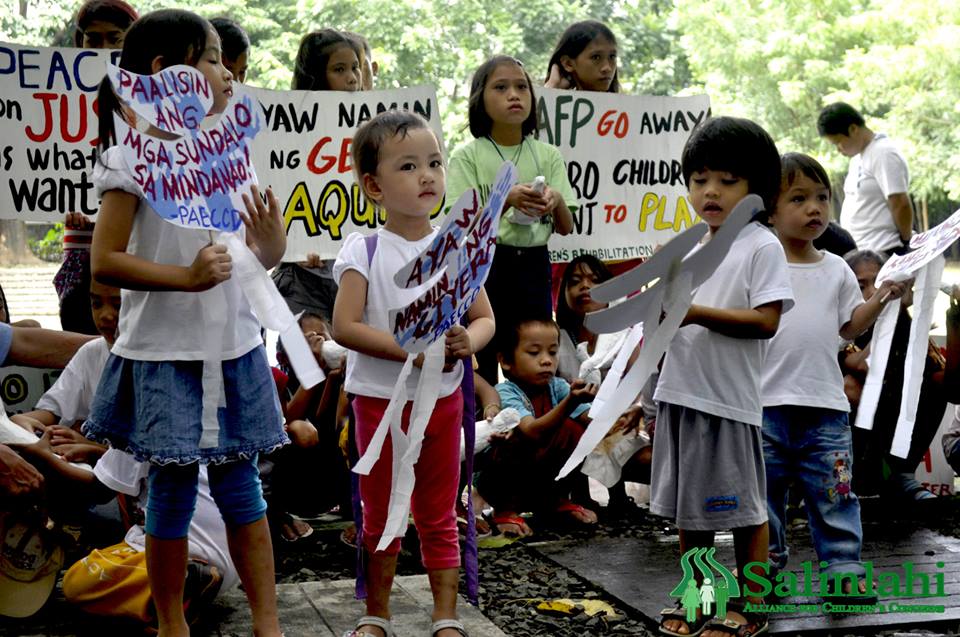 Manano recalled stories of Jomie Eithan, 2, and May Ann Tigoy, 6 who died after being hit by bullets from the gunfight. They were among the total 12 civilians who died because of the war. “Add to that the many children and their families who lost their homes and had to seek safer cover in evacuation centers.” 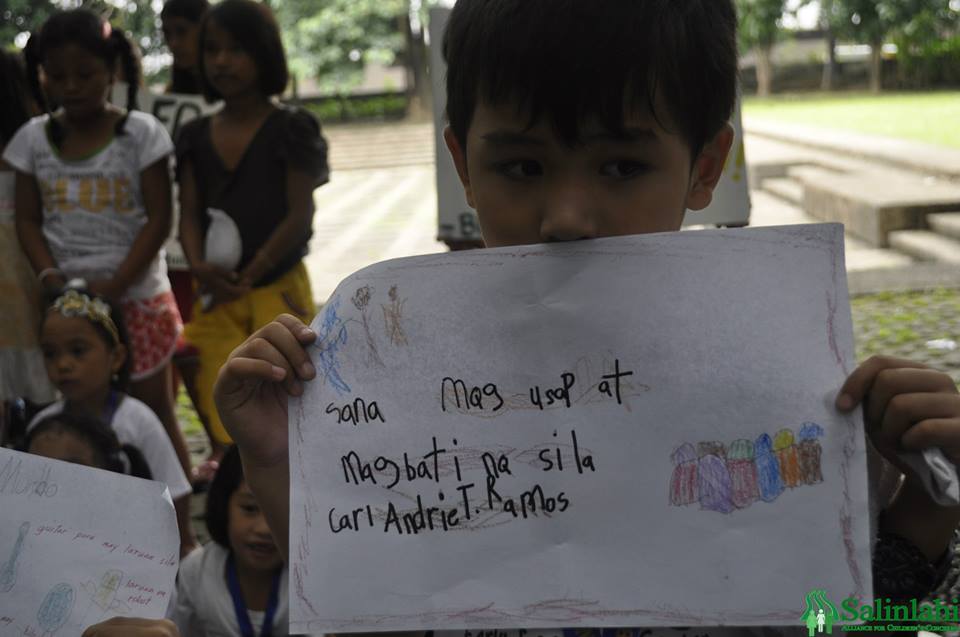 The children set out doves as they called for an end to the hostilities and ensuring peace in that part of Mindanao. They also stuck cut-out paper doves on a mural bearing grim photos of the ongoing war to further reiterate their call.

The groups demanded that Aquino, as chief executive and AFP commander-in-chief, to put an end to the crisis in Zamboanga. 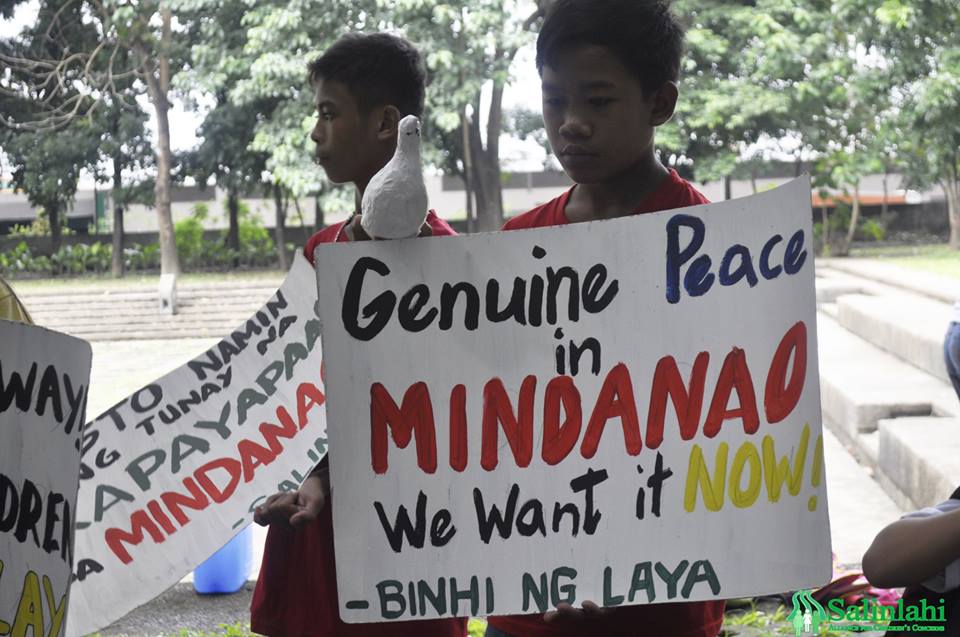 “The state forces should enforce a ceasefire and stand down so that the MNLF fighters can retreat safely from residential areas and avoid further damage to property and lives. Children and the people of Zamboanga are clamoring for a peaceful life, isn’t it Aquino’s responsibility to respond to the people’s demands?” Manano asked.