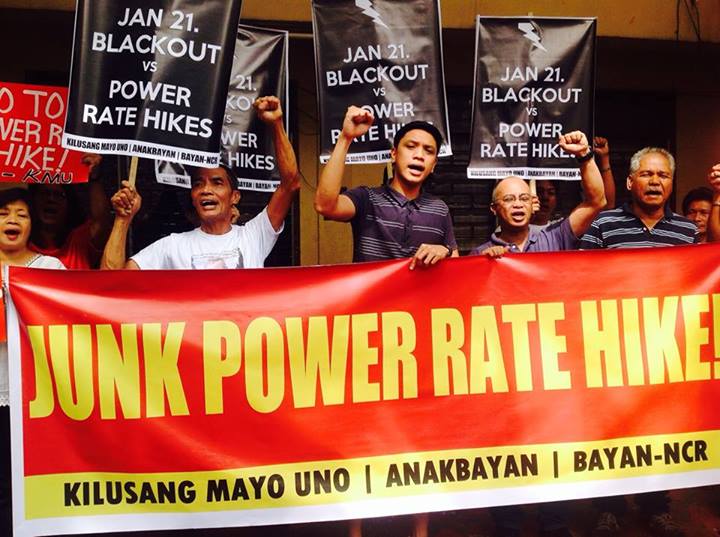 MANILA — At a press conference in Quezon City this morning, national labor center Kilusang Mayo Uno and activist youth organization Anakbayan asked the public to join in what they called “Blackout Protest” this January 21 against the power rate hike which the Manila Electric Company wants implemented.

The groups called on power consumers to join a rally to be held in front of the Supreme Court in Manila in the morning of Jan 21, as the high tribunal is set to hold a hearing on the Temporary Restraining Order it issued against the rate hike.

They also requested the public to turn off lights at 7:00 p.m. of the same date and turn into a form of protest the widespread brownouts that Meralco threatened the public with if their power rate hike was foiled.

“We are calling on power consumers nationwide to release their pent-up anger at Meralco on January 21. Meralco has for so long been stealing from us,” said Roger Soluta, KMU secretary-general.

The groups called on the public to act before the Supreme Court’s TRO against Meralco’s power rate hike expired. The TRO was issued last December 23; it stands for only 60 days.

“We are calling on power consumers to exercise the power of our collective action and push the Supreme Court to permanently junk this burdensome rate hike. Meralco has continuously increased its huge profits through the years by extorting high payments from the public,” said Vencer Crisostomo, chairman of Anakbayan.

Meralco has increased its profits by 56.3 per cent yearly for the past six years, from P2.6 billion net income in 2008 to P16.3 billion in 2012, according to a stuy of independent think-tank Ibon Foundation.

“It is unacceptable that Meralco can boost its profits by increasing the burden of power consumers. We find it revolting that Meralco is the No. 1 corporation in the country in terms of profits while the Philippines is No. 1 in Asia in terms of costly electricity rates,” Soluta said.

The groups also condemned Pres. Noynoy Aquino for refusing to junk the Electric Power Industry Reform Act or Epira, which they say legalizes incessant power rates hikes. They took to task the president as well for his failure to remove the 12 per cent Value-Added Tax on power rates, which they estimate will bring the government almost P2 billion ($44.34 m) additional tax earnings if the power rate hike is implemented.

“Aquino is obviously ‘Noynoying’ and colluding with power firms on this issue. He wants the government to continue to collect huge tax earnings from the public despite the suffering being caused by the high power rates on the people,” Crisostomo said.
(Photo courtesy of KMU Public Information Dept.)