MANILA – Health workers of the Philippine Orthopedic Center (POC) and supporters once again stormed the main office of the Department of Health (DOH), Jan. 27.

The groups asked the DOH to rescind the awarding of modernization project of the POC. They also called for Health Secretary Enrique Ona’s resignation and the ouster of President Benigno S. Aquino III for “abandoning their responsibility to the people.”

“We hold the government and the DOH accountable for making public health services further beyond reach of the poor majority, resulting in illnesses and deaths,” he added.

The health workers are set to file a petition for temporary restraining order with the Supreme Court against the POC’s modernization project on Feb. 3.

Velchez said their lawyers from the National Union of People’s Lawyers (NUPL) are now preparing the necessary documents to stop the modernization project of the POC.

On Nov. 21, 2013, President Aquino approved seven infrastructure projects worth P184 billion ($4.052 billion) including the modernization project of the POC. On Dec. 6, 2013 the DOH awarded the modernization project of the POC worth P5.6 billion (P123 million) to its only bidder, the consortium of Megawide Construction Corporation and World Citi Medical Center. The private companies will build the new POC at the National Kidney Transplant Institute (NKTI) in East Avenue, Quezon City and will take over the hospital’s operation for the next 25 years. The construction of the new POC is targeted to begin in April this year.

The health workers, patients, religious groups and other groups against privatization of government hospitals have been opposing the “modernization project” saying it would hamper services to the poor. “Hospital cost will surely increase as a private company will take over the hospital’s operation for 25 years,” said Velchez.

Janice Gavilla who has a 19-year-old niece confined at the POC because of a spinal injury appealed to the government not to pursue the supposed modernization. Gavilla, 29, said she is among the many patients who benefit from the affordable services of the POC. “Whenever we appeal to the social welfare her laboratory tests gets discounted. The x-ray which cost P800 ($17.62) can be discounted to P200 ($4.40),” Gavilla told Bulatlat.com.

Gavilla said poor patients would greatly suffer once the POC is privatized. She said the Aquino government should mind the plight of poor patients. “Where are we supposed to go when the only hospital in the country that specializes in bone diseases is privatized?” Gavilla asked.

Media reports quoted Ona denying claims that hospitalization cost would increase once the POC is modernized. But advocacy groups belied this, citing the experiences in Government Owned and Controlled Corporations (GOCCs) such as the Philippine Heart Center, Lung Center of the Philippines, NKTI and Philippine Children’s Medical Center, that increased fees. 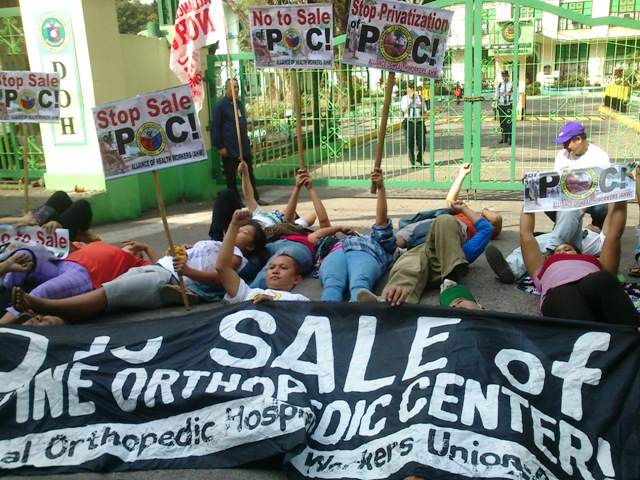 Jossel Ebesate, national president of Alliance of Health Workers (AHW), said the government should stop deceiving the public by sugarcoating the privatization as “modernization.” He said the measles outbreak and high rabies cases are indications that the country’s health care situation is not improving. “The government’s privatization programs are allowing private investors to rake in profit out of people’s illnesses.”
He cited the collection of fees for previously free health services, private take-over of laboratory, radiology and other hospital procedures and services, and the outright sale of government hospitals as part of privatization program, all of it worsening the people’s predicament.

“A President like Aquino who abandons its responsibility to the people should be ousted. He promised a righteous path but are we treading that path? His anti-people projects like the Public-Private Partnerships are burdensome to Filipinos. They are left with no choice but to await their death as basic social services like health is inaccessible to ordinary people,” said Velchez.

“We will do everything to put stop the privatization of government hospitals as this does not only affect our security of tenure but the poor patients as well,” Antonio told Bulatlat.com.

The modernization project of the POC is the first hospital under the Public-Private Partnership projects under the Aquino government.