“The AFP wants the big brother in Washington DC to come in like a wrecking ball at the West Philippine Sea even if it means the complete surrender of Philippine sovereignty to the US.” – Pamalakaya

MANILA – A national federation of small fishermen today accused President Benigno Simeon Aquino III and the Armed Forces of the Philippines (AFP) of using small fishermen as political pawns and ready-made collateral damage in its current dispute with China over islands in the West Philippine Sea.

In a press statement, the Pambansang Lakas ng Kilusang Mamamalakaya ng Pilipinas (Pamalakaya) said the “Washington-controlled Malacañang” is driving fishermen to test Beijing’s military might and aggressive patrolling of South China Sea by persuading them to fish at their own risk.

“Our fishermen are being used as political pawns or ready made collateral damage to provoke Beijing. And the Aquino administration is doing it as if Malacañang is the front act performer for a US military concert in South China Sea to ignite political-military clash with China. Our lives are being offered at the altar of this US war of aggression in the region courtesy of the puppet republic in Manila,” said Pamalakaya vice chairperson Salvador France.

The Pamalakaya official last week issued a statement strongly criticizing Beijing for employing water cannons to drive away fishermen in Scarborough Shoal. France maintained that Scarborough Shoal is part of Philippine territory because it is situated inside the country’s Exclusive Economic Zone (EEZ) as defined by the United Nations Convention on the Law of the Sea or UNCLOS. 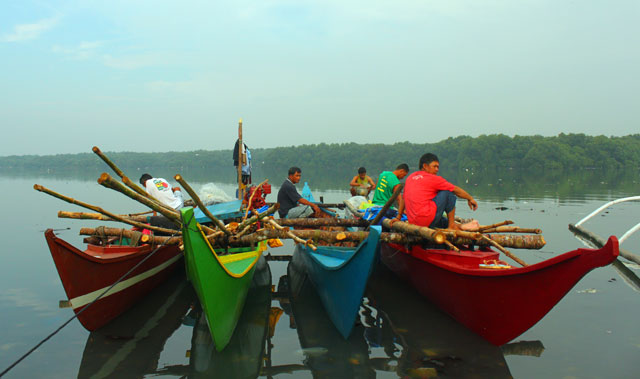 The fisherfolk group reminded Beijing that it would be better if it would listen and adopt policies that promote bilateral and multilateral dialogues between China and the Philippines and among claimant nations in South China Sea and pursue foreign policies that would respect sovereign and territorial claims, ensure measure of non-interference and instead promote people-to-people relations to pave the way for a peaceful resolution to conflict, instead of promoting acts that would give way to Washington’s all-out and blatant aggression in East Asia and the Pacific courtesy of the still unresolved dispute between Beijing and Manila and among nations claiming South China Sea in whole or in parts.

Lt. Col. Ramon Zagala, spokesman of the AFP last week said the fishermen should continue fishing at Scarborough Shoal despite reported incidents of Chinese coastguard harassment of local fishermen near the contested territory.

“I believe the Chinese coast guard attempted only (to drive them away) and they were not successful,” during a press briefing held at Camp Aguinaldo. But Zagala did not elaborate further when asked how the fishermen are supposed to handle the Chinese in such situations.

Last year, the AFP recorded a dozen of incidents concerning Chinese coastguard harassment of local fishermen. The Scarborough Shoal is 124 nautical miles off Zambales, which is well within the 200-nautical mile exclusive economic zone. In 2012, a standoff in the shoal between the Philippines and China sparked tensions after the Philippine Navy caught Chinese fishermen with illegally collected endangered corals, giant clams and live sharks.

Armed Forces Chief of Staff Gen. Emmanuel Bautista in forum with the Foreign Correspondents of the Philippines (FOCAP) said the incident was relayed by small fishermen to Philippine authorities and that China still maintained armed Coast Guard and other vessels at Panatag Shoal, some 220 kilometer off the Philippine main island of Luzon.

Pamalakaya asserted that an independent probe to be administered or sanctioned by the Beijing and the Philippine governments must be carried out to determine the real score, saying it is highly dangerous to rely on the report of the Armed Forces of the Philippines (AFP), which, France said, is biased and attached to US military command.

“For the sake of objectivity, we ask the governments of China and the Philippines to initiate an independent investigation on the incident, which should be free from pro-US prejudices. And this is major political challenge to the administration of President Benigno Simeon Aquino III who is known as the no.1 lapdog of Washington DC in Asia and the Pacific,” the group said.

Pamalakaya admitted it does not trust the AFP and the Aquino administration in dealing with the Scarborough Shoal and the West Philippine Sea dispute, adding that Aquino has repeatedly and brazenly played his role to the hilt as American spoiler on China issues, including but not limited to South China Sea.

Likewise, Pamalakaya questioned the motive and the timing of reporting the incident, saying that the firing of water cannon by Chinese coast guards at Filipino fishermen happened last month and that should have been reported on the day it took place.

” Why did it take a month for the AFP to publicly announce the incident? What is the motive? Is it to justify the approval of another military agreement with Washington that would pave way for the increase of US military presence in the country? What is the real objective of this latest escapade of the AFP? The people deserve the truth and nothing but the truth,” the group said.

Pamalakaya believed that all the statements issued by the AFP chief is masterfully directed by the US government in a vain attempt to exploit the conflict and advance the agenda of the US to check Beijing’s increasing role in global politics and pursue US global hegemony to control practically everything in East Asia and the Pacific, including South China Sea and the vast oil and gas resources found in the disputed territories.

The group said the “incident” as reported by AFP is meant to fast track the agreement allowing the increase of US military presence in the country and to please US President Barack Obama who is coming to the Philippines in April.

“The immoral, illegal and unfounded intervention of the US in the South China Sea conflict is courtesy of the puppet government of Mr. Aquino. The US wants the entire South China Sea in the name of oil and gas deposits and sooner or later, transform South China Sea as the US military naval base in East Asia and the Pacific with junior partners Japan and South Korea playing the support roles and the Aquino government essaying the role of a water boy for Washington DC for US and company of aggressors,” the group said.

Pamalakaya said the release of the report by the AFP chief of staff is “patently pathetic, rated-A puppetry and blockbuster act of pauperism to superpowers like the United States to come in and intervene on the current conflict at the West Philippine Sea to check the aggressive campaign of China in the disputed waters.

” The AFP wants the big brother in Washington DC to come in like a wrecking ball at the West Philippine Sea even if it means the complete surrender of Philippine sovereignty to the US. He is telling the international community that the Philippine government will embrace US occupation of South China Sea at any given time,” the group said.