You Are Here: Home → 2014 → March → 15 → Online libel, other provisions assailed in appeals vs SC ruling on Cybercrime Law

Online libel, other provisions assailed in appeals vs SC ruling on Cybercrime Law

“The questioned law has a particularly chilling effect on online journalism. These days, not only will a journalist’s work be published using traditional media, but it will be made available on the internet.” – media groups

MANILA — Three groups of petitioners filed separate motions for partial reconsideration on the Supreme Court’s ruling on the Republic Act 10175 or the Anti-Cybercrime Act of 2012.

The National Union of Journalists of the Philippines (NUJP) and the Bloggers and Netizens for Democracy (BAND) filed their appeals, March 13 while the Bagong Alyansang Makabayan and Bayan Muna filed their joint petition, March 12. Earlier, youth groups led by Kabataan partylist filed the first motion for reconsideration on the high court’s ruling on the law.

In its decision dated Feb. 18, the high court upheld the constitutionality of most of the provisions of the Cybercrime law, including online libel, and struck down some of its provisions.

In its petition, the NUJP and other media organizations such as the Philippine Press Institute and the Center for Media Freedom and Responsibility (CMFR), through their lawyers from the Free Legal Assistance Group (FLAG), maintained that libel in the Revised Penal Code and online libel in the Cybercrime Law are incongruous with Article III, section 4 of the 1987 Philippine Constitution, and the International Covenant on Civil and Political Rights (ICCPR), to which the Philippine government is a party. The said provision on the Philippine Constitution guarantees freedom of speech, of expression, and of the press, and the right of the people to peaceably assemble and petition the government for redress of grievances. 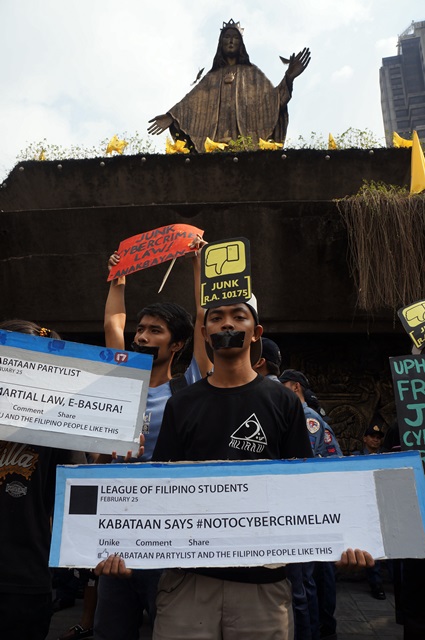 The petitioners quoted at length the May 2011 report of Frank La Rue, the Special Rapporteur on the Promotion and Protection of the Right to Freedom of Opinion and Expression, who said, “The Special Rapporteur remains concerned that legitimate online expression is being criminalized in contravention of States’ international human rights obligations, whether it is through the application of existing criminal laws to online expression, or through the creation of new laws specifically designed to criminalize expression on the Internet. Such laws are often justified as being necessary to protect individuals’ reputation, national security or to counter terrorism. However, in practice, they are frequently used to censor content that the Government and other powerful entities do not like or agree with.”

Media groups noted that the United Nations special rapporteur, in the same report, called on all states to decriminalize defamation.

The petitioners also pointed out that the high court itself, in Administrative Circular No. 08-2008, has declared an ‘emergent rule of preference for the imposition of fine only rather than imprisonment in libel cases.’ “All courts and judges concerned should henceforth take note of the foregoing rule of preference set by the Supreme Court on the matter of the imposition of penalties for the crime of libel,” the administrative order, approved by the SC en banc, stated.

Section 6 of the Cybercrime Law imposes higher penalties for all crimes defined and penalized by the Revised Penal Code (RPC) if committed by, through and with the use of information and communication technologies.

“The questioned law has a particularly chilling effect on online journalism. These days, not only will a journalist’s work be published using traditional media, but it will be made available on the internet,” the media groups said in their petition. “The importance of the internet as an interactive medium for journalists has steadily grown. It has become a powerful tool by which journalists can engage the people as partners in the search for the truth.”

In its separate petition , a group of bloggers and netizens also assailed the chilling effect of the questioned law.

Stating that freedom of expression has two aspects: one is the freedom from censorship or prior restraint and the other is freedom from subsequent punishment, BAND said that the Cybercrime Law curtails both of these freedoms.

“The chilling effect of the libel provisions of the Cybercrime Prevention Act and of the Revised Penal Code is both real and apparent,” the petition stated. “To avoid prosecution under the said section, bloggers who used to freely contribute to the ‘marketplace of ideas’ would now refuse to speak and are relegated to deafening silence.”

The BAND also deems that the SC’s hairsplitting on authorship of an online work “rests on an unfortunate mistaken notion of how the internet and social media works.”

The BAND explained in its petition, “An RT (retweet on Twitter) is a publication. A modified RT with a comment is in itself a publication, oftentimes distinct from the original post by the original author. In other platforms, there is virtually no way to find the original author. Would the Questioned Law thus authorize a fishing expedition by investigators and prosecutors so they can pin down anyone for a libelous internet post?”

In the same vein, Bayan and Bayan Muna said in their joint petition that the classification made “trivializes the exchanges of communications in the internet.” “Resorting to such a limited judicial approach, instead of declaring the entire Section 4(c)(4) unconstitutional, does not do away the breadth of chilling effects that said penal provision creates on the exercise of freedom of speech, thereby greatly endangering the constitutional norm in pursuing the State’s primary interest in upholding the freedom of speech clause,” the petitioners said.

Bayan and Bayan Muna also argued that no reasonable standards exist on how a reaction to a post is also considered a new libelous publication.

The said petitioners also noted in their appeal that the SC “should consider in its decision the reality that criminal defamation suits are used to silence critics and stifle freedom of speech.”

Bayan and Bayan Muna deem that libel as well as other provisions of the law is overbroad. They again cited the law’s definition of “computer system” which may include various electronic devices that may not even be connected to the internet. “The commission of libel through the very broad means of a ‘computer system’ is open to abuses, especially when there are no reasonable and judicially determinable standards,” the groups said.

The groups also maintained that Section 6 of the law, which imposes higher penalties for all crimes defined and penalized by the Revised Penal Code (RPC) if committed by, through and with the use of information and communication technologies, is “unconstitutional for violating equal protection and substantive due process.”

The petitioners stated, “No substantial distinction exists between those who commit crimes, on one hand, through ICT or the internet, and those who use other means, on the other.”

Meanwhile, media organizations stated that Sections 14, 15, 24 and 26(a) violate the
separation of powers, as judicial and legislative powers are unduly delegated to the Secretary of Justice, Philippine National Police (PNP), National Bureau of Investigation NBI and Cybercrime Investigation and Coordinating Center (CICC).

“The CICC is given the power to formulate and implement the national cybersecurity plan under section 24. There are no parameters, nor standards, to guide respondent CICC in formulating it. Such a delegation is unconstitutional, for it amounts to an abdication of the legislative power to formulate policy in favor of an administrative agency, which would only be mandated to enforce any such policy,” the petitioners said.