“The management is harassing and threatening workers, telling them they held a concerted action — an illegal strike — when the workers only elected to respect the Philippine holiday. They’re just forcing us to work.”

MANILA — The road to getting a wage adjustment has taken another turn for hundreds of electronic workers of NXP (formerly Philips) in Cabuyao, Laguna. Last Wednesday April 16, the office of the Labor Secretary started to intervene in their wage hike dispute with the company. The Department of Labor and Employment (DOLE) summoned union leaders to meet with representatives of the management in its office. At least 300 hundred members of the union held a picket in front of NXP in Cabuyao before some of them travelled to Manila to hold another picket outside the Labor Department, while officials of Office of the Labor Secretary were meeting with NXP management and union.


But the company claimed that it has a corporate policy against wage hikes. By the end of February, It declared a deadlock in the negotiations with the workers’ union for a new collective bargaining. Still, the “negotiation” continued with only the union adjusting their proposal until they are finally down to an eight percent wage hike proposal. After 21 meetings, NXP had not budged at all from its 3.5 percent proposed wage hike, said the union. This is equivalent to P25, an amount which the workers decried as too little to help them cope with price hikes.

To press for their wage hike demand, the NXP workers have been conducting mass actions inside their Cabuyao plant and outside (but still within the industrial enclave). They hold picket protests, march-rallies inside and around the plant and coordinated ribbon and T-shirt wearing.

On April 9, a legal holiday, the management accused them of having conducted an illegal strike. The management issued an ES (explanation slip) to 90 percent of the workers. “The issuance of an ES usually meant one is being charged with a case,” said Julius Carandang, union board member. That 90 percent (1,700 workers) of the workforce got an ES explanation slip at the same time has never happened before in NXP, Carandang said.

“In every holiday, workers cannot be forced to work, but they (management) came out with a memorandum last April 7 saying these holidays are normal working days,” unionist Ramon Oñate, flux clean operator (a line of work before quality control) at NXP, told Bulatlat.com. He said even Maundy Thursday April 17 and Good Friday April 18 were declared as “regular working days” in NXP.

“Is the NXP corporate policy above Philippine laws?” NXP workers asked their supervisors and the management. With the company memo, the workers noticed the beefed up security in their workplace and in places where workers normally congregate, including the shuttle bus. 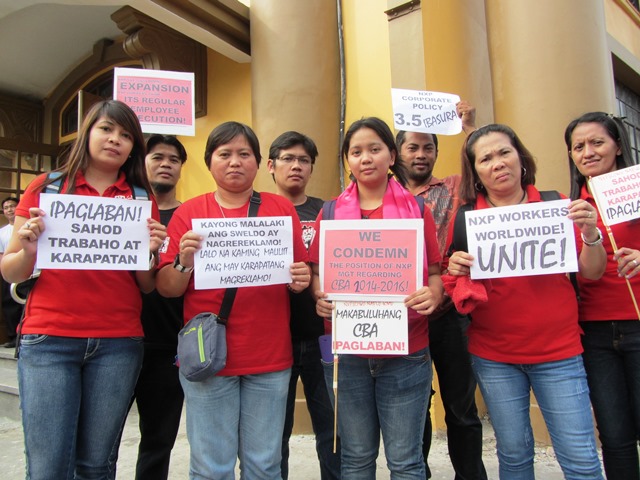 “The management is harassing and threatening workers, telling them they held a concerted action — an illegal strike — when the workers only elected to respect the Philippine holiday. They’re just forcing us to work,” Carandang said.

By the first week of April, the word “lockout” started to be heard in NXP Philippines, but work continued in the plant. Thirty-eight year old Sam Apolonio, chief of shop stewards who has worked for 16 years in NXP, said the management started to threaten workers with “lockout” on April 6.

Employees deemed afraid of losing their jobs are expected to be more accepting of any wage rate and any work condition. Apolonio said even the “regular working day” treatment of legal holidays is a way of forcing the workers to work overtime.

As if they are pit together in a race to the bottom, the regular workers and the contractual workers both suffer an increased pinch in NXP. According to the union leaders, with the increased number of contractual workers employed by NXP since negotiations for a new CBA started, the regular workers are threatened to fight for a greatly reduced wage hike demand. The contractuals, meanwhile, have not yet been paid their wages for two months. Because of their sudden increase in number, the office reportedly could not cope yet with extra paperwork and computations for their wages, among others.

All these problems, the union said, could have been solved easily if the management would listen to their doable, already much-reduced demands to conclude the CBA negotiations. But the “NXP management has been bargaining in bad faith. In this situation, we wonder why a simple case like CBA negotiation could prompt them to bring it to the office of the Labor Department itself,” said Carandang.

In their picket before the DOLE on Holy Wednesday, the workers urged the Labor department to side with them instead of the transnational NXP. The DOLE conciliator reportedly told the union and management panels that the negotiation should start from where the past CBA left off. The workers’ wage hike in the final year of its last CBA was seven percent.