Carlos Maningat of EILER urged workers to join their series of trainings on how to use the social media to amplify workers’ issues. Already, they have tried doing an e-discussion on labor contractualization, via a live-streamed question and answer discussion of issues on contractualization.

MANILA – For the first time in the Philippines, workers from various companies and labor advocates agreed to use a common hashtag to amplify workers’ voices in digital platforms. For protests against Obama’s visit, their hashtag is #NObama, for protests this coming May 1, Labor Day, it is #May1Fight. 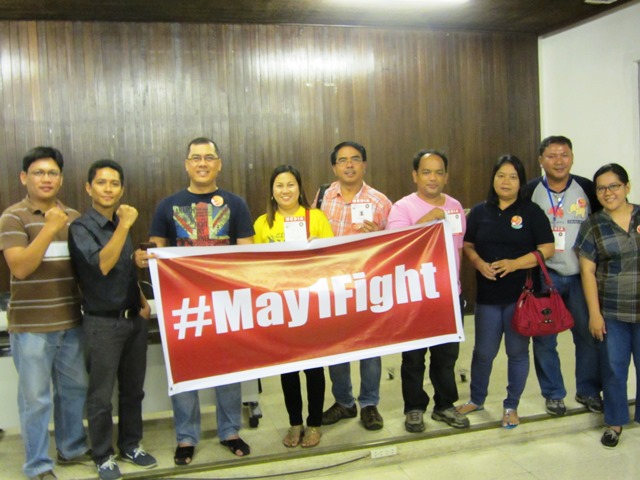 On Saturday (Apr. 26) labor NGOs led by EILER and IOHSAD and the Kilusang Mayo Uno launched these hashtags in a gathering at the UP College of Mass Communication, which also attended by bloggers. They also unveiled schedules of virtual and actual gatherings beyond May 1 seeking to turn gadget-wielding workers into working class reporters. (For a list, please readhere )

Carlos Maningat of EILER urged workers to join their series of trainings on how to use the social media to amplify workers’ issues. Already, they have tried doing an e-discussion on labor contractualization, via a live-streamed question and answer discussion of issues on contractualization.

Availing themselves of the competing electronic gadgets and telco promos, workers and labor advocates are urging all members of the labor force and the youth, including the “fresh graduates/unemployed,” to use the social media for faster communication of workers’ issues and speedier unification for holding collective actions.

Elmer Labog, KMU Chairperson, urged all workers to post messages and tag the issues with the official Labor Day hashtag ?#?May1Fight???. These include “End contractualization! Wage increase now! No to ChaCha!”

“Let’s not allow Vhong Navarro or Kris Aquino to hog the top spots in trending at the social media,” Neil Ambion of KMU’s Public Information Department said, adding it is time the workers issues such as jobs, P125 wage hike, also take a spot among the trending issues in social media.

Hashtags facilitate crowdsourcing. This means that through hashtags, researchers can more easily gather in a few clicks all information and updates posted under that tag, explained Noel Colina of the Institute for Occupational Health and Safety.

A unionist with the NXP Semiconductors (formerly Philips) attested to the helpfulness of social media. He cited their recent experience where NXP workers united against the company’s violation of legal holidays in the Philippines with the help of active exchanges of posts in their social networking sites. Nearly 300 workers of NXP held an unprecedented march from inside their plant to outside the gates of the industrial park in Laguna where their company is located this morning, the NXP unionist said.

Carlos Maningat of the Ecumenical Institute for Labor Education and Research (EILER) announced at the launch of #May1Fight their upcoming dissemination of an e-magazine on Obama’s state visit to the Philippines.

In the days leading to May 1, he invited workers and labor advocates to visit their G+ Hangout: “Workers demands in focus.” He said they would provide live updates on final preparations for #May1Fight, and live coverage on May 1 itself.