“It has been four years that you have been Commander-in-Chief, yet we do not know the truth about Jonas. Mr. President, is there hope that the truth will finally be revealed while you are still in the position to make this happen?” – Mrs. Edith Burgos

MANILA — The family of missing activist Jonas Burgos is reminding President Aquino to fulfill his promise in helping surface him.

In an open letter addressed to Aquino, Mrs. Edith Burgos, mother of Jonas, said, “we reacall how a few days before you were sworn in as President of the Republic of the Philippines, we were so full of hope.”

“We, my children and I, thought it would be just a matter of time before we would find Jonas. Our hope was anchored on your promise to do what you could ‘on the basis of evidence’ when I, accompanied by my son, personally pleaded for your help,” Mrs. Burgos said.

Aquino’s promise, she added, was made four years ago. Her son Jonas has been missing for seven years now, Apr. 28, 2014.

“It has been four years that you have been Commander-in-Chief, yet we do not know the truth about Jonas. Mr. President, is there hope that the truth will finally be revealed while you are still in the position to make this happen?” Mrs. Burgos said. 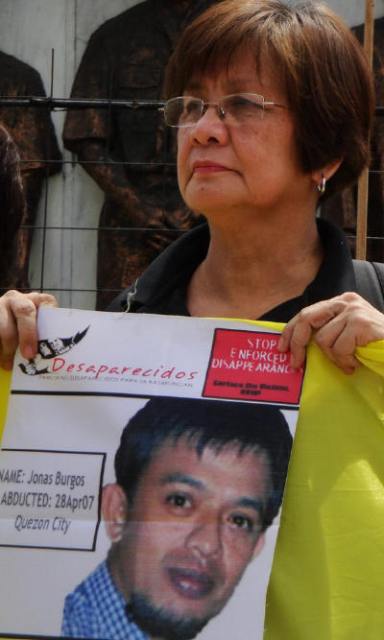 Jonas, son of late press freedom fighter Jose Burgos Jr., was abducted by suspected state security agents on Apr. 28, 2007 while eating in a restaurant in a mall in Quezon City. The license plate of the vehicle used in the abduction was later on traced to a vehicle under the custody of the 56th Infantry Battalion of the Philippine Army.

Mrs. Burgos reminded President Aquino that the Supreme Court, on July 5, 2011, upheld the findings of the Commission on Human Rights and directed the military to produce Jonas.

She added that corresponding criminal charges were filed against Maj. Harry Baliaga Jr., named by the Commission of Human Rights as the principal abductor of Jonas, and Eduardo Año, who was later on appointed chief of the Intelligence Service of the Armed Forces of the Philippines and “promoted from Brigadier General to Major General, in spite of my objections filed with the Commission on Appointments.”

Mrs. Burgos said such appointment to crucial positions in the military “could enhance and encourage the climate of impunity now prevalent in our country.”

On Mar. 18, 2013, the Court of Appeals ruled that Jonas’ disappearance is a case of enforced disappearance and that the Armed Forces of the Philippines, particularly the Philippine Army, is accountable for his abduction. The Supreme Court also upheld the same findings in its Feb. 2, 2014 ruling, said Mrs. Burgos.

“In the light of the new evidence I have submitted to the SC on April 1, 2013, on April 4, 2013 you issued a directive to the Department of Justice (DOJ) to order the National Bureau of Investigation (NBI) to conduct a ‘focused, dedicated and exhaustive investigation on the Jonas Burgos case … to ferret out the truth…’. Mr. President, more than a year has passed since this order was given, may I know if this order elicited any result?” the open letter read.

Mrs. Burgos said the Supreme Court, in light of the new evidence they submitted before them, has ordered the Armed Forces of the Philippines to “locate the officers who abducted Jonas and has issued a Temporary Protection Order to me and members of my family in cognizance of the critical value of the new evidence I submitted to the SC.”

The commemoration of Jonas’ disappearance also coincided with US President Barack Obama’s state visit in the country, Cristina Palabay, secretary general of Karapatan, said in a protest action in Mendiola on Apr. 28, 2014.

Palabay, in a statement, said the US government is equally responsible for human rights abuses as the Aquino administration. The US government, she added, is “the main funder of the AFP’s war chest.”

During the joint press conference, Aquino said, “we did set up an inter-agency committee to look into extra-legal killings and forced disappearances, torture and other grave violations of right to life, liberty and security of persons.”

Palabay said in a statement that the US funded the Philippine military $507 million from 2001 to 2010. The fund was cut to $11 million in 2011 due to mounting pressures from the international community but still increases every year.

“The violations continue and are escalating in an alarming rate with the help of US military aid,” Palabay said, adding that “the lifting of the restrictions on US military aid financing this 2014, bringing the US Congress-approved military aid in the Philippines to US$50 million, came with a price – 21 extrajudicial killings in the first quarter of 2014, two victims of enforced disappearances, 61 illegal arrests and detention including that of peace consultants Benito Tiamzon, Wilma Austria-Tiamzon and 6 companions, and the massive forced evacuation of 1,300 Manobos of Talaingod town in Davao del Norte.”

Palabay asked how Obama could speak of human rights when his very same government has been funding the Philippine military and training its men for counterinsurgency programs, which, more often than not, result in rights violations.