MANILA — Leaders of the workers’ union in NXP Semiconductors Cabuyao Incorporated had their heads shaved in protest of their illegal dismissal during a picket in front of the Labor Department’s main office in Intramuros, Manila this morning. 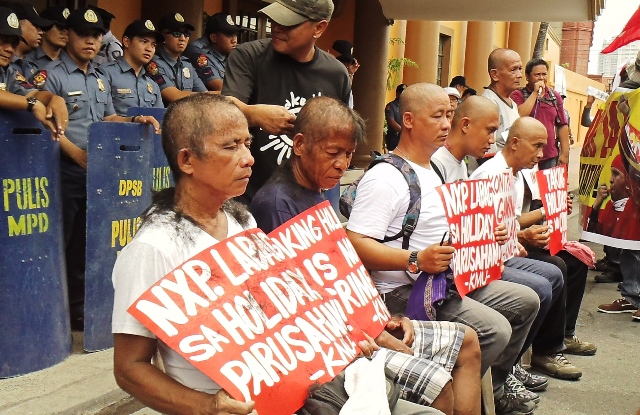 The 24 leaders of NXPSCI Workers’ Union said their employer’s justification in dismissing them – that they supposedly launched illegal strikes on April 9, 17 and 18 and on Labor Day – has no basis since these dates are regular holidays according to the Labor Department.

“The Labor Department promised to punish employers who will not observe the country’s laws governing holidays. Why is it that we workers are the ones being punished by the NXPSCI management for having opted to be with our families on the said holidays?” asked Reden Alcantara, president of the NXPSCIWU.

The NXPSCI argued in an open letter posted at a newly-created website that while it is true that those three dates in April in which many employees were absent from work were public holidays, Philippine labor law (article 94 of the Labor Code) clearly states that a company may ask employees to work on public holidays provided that employees are paid double their regular wages.

Union president Reden Alcantara countered that while it is legal for the company to make workers work during holidays, it “has no right to accuse union leaders of illegal strike because of those who did not to go to work” on such holidays.

In the past, NXP has not filed a similar case against workers, Alcantara recalled. As such, he concluded that this recent filing proves the management has malicious motives in making this accusation of illegal strike.

National labor center Kilusang Mayo Uno, to which NXPSCIWU-National Federation of Labor Unions is affiliated, claimed that the real reason behind the illegal dismissal is the management’s refusal to heed workers’ demands in ongoing negotiations for a Collective Bargaining Agreement. 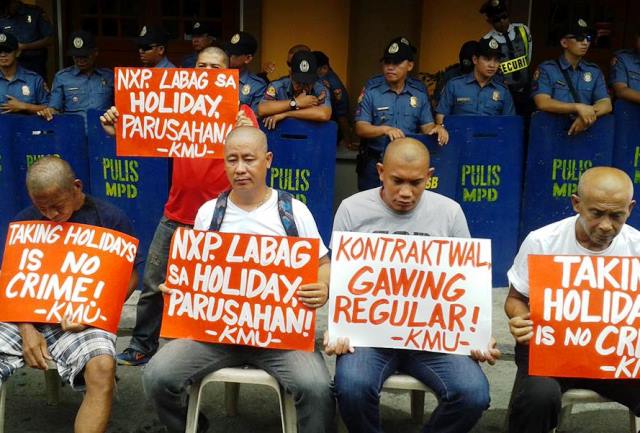 Elmer “Bong” Labog, KMU chairperson, accused NXP of seeking to weaken its workers’ demand for a significant wage hike and for regularization of contractuals, through termination of the union leaders from their jobs. He said it has been the capitalists’ age-old tactic to hinder or bar workers’ struggle for their rights.

NXPSCI is one of the biggest electronics companies in the Philippines and a supplier of well-known brands Apple, ASUS and Nokia. Its Cabuyao factory is an important part of a global operation, its new website said.

Before the union leaders were terminated May 5, the wage hike proposals on the bargaining table were a P60 wage hike (from union side) and the management proposal for P20 wage hike and the regularization of hundreds of contractuals employed by the company.