“Aquino’s idol is Emilio Aguinaldo, who sold the young Philippine Republic to the US in the 1900s. But Aquino did worse than Aguinaldo because he gave away the Philippines for free and tax-free, too.” – Vencer Crisostomo, Anakbayan

MANILA – On the 116th year of Independence Day in the Philippines this Thursday, President Aquino flew to Naga City in Bicol, where US forces recently concluded its annual Balikatan war exercise, to join the celebrations there as guest of honor. When he gave his speech in the early morning program, President Benigno ‘Noynoy’ Aquino III said that Independence Day is the culmination of all sacrifices and victories of the country’s heroes. He recalled that when Filipinos first raised the national flag, played the national anthem and declared independence, they were people who held their destiny in their hands.

However, in speeches in at least three parts of Metro Manila and in various Philippine cities, including Naga where activists gathered, progressive groups lambasted what they called as the betrayal of the 1898 revolution. Under the regime of President Benigno “Noynoy” Aquino III, the betrayals have been the worst, according to different leaders of progressive people’s organizations.


“Aquino’s idol is Emilio Aguinaldo, who sold the young Philippine Republic to the US in the 1900s. But Aquino did worse than Aguinaldo because he gave away the Philippines for free and tax-free, too,” said Vencer Crisostomo during a program at Kalaw Avenue in Manila that same morning. Crisostomo was referring to a provision in the Enhanced Defence Cooperation Agreement (EDCA) signed a month ago by the Aquino and Obama administrations, where the Philippine government gives the US forces basing rights over “agreed locations” rent-free and tax-free.

No independence to celebrate with EDCA and corruption

The Independence Day protesters intended to march to the gates of the US Embassy, but columns of anti-riot policemen wearing helmets and body armor, and wielding shields and truncheons blocked their way more than a hundred meters from the embassy.

The protest march featured at its forefront a group of cultural artists garbed as members of the Katipunan, the mass organization that spearheaded and succeeded in throwing out by armed revolution the Spanish colonialists in 1898. To these artists’ dismay though, one of their props, a long antiquated rifle lent by a photographer to help in the streetplay, was forcibly seized by a member of the Philippine National Police. 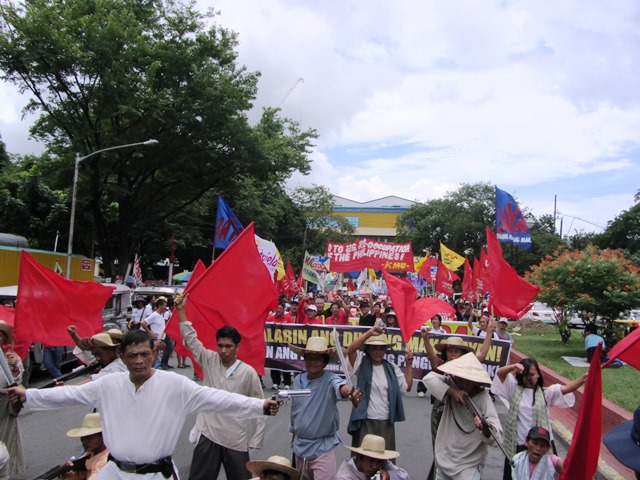 “That’s illegal possession of firearms!” the policeman had shouted as he grabbed the rifle from the costumed youth. The young cultural artist was stunned with disbelief when the policemen ran away with a rifle that is good only as props. Later, the event became a butt of jokes to the rallyists. “Please return it to us, you cannot even sell that,” the activists later told the police. But the police refused to return it.

Despite joking about the scene, the fact that something like that happened, and that the marchers were blocked on their way to the US embassy, served to highlight the “illusion of independence on so-called Independence Day,” the emcees said during the program.

“June 12 is not for celebrating freedom because with the US forces and multinational companies occupying and plundering the country, there is no genuine freedom,” said Fernando Hicap, Anakpawis Representative. He added that there is no genuine freedom, too, when your government’s programs and policies serve only a few, namely, the biggest landlords, business groups, the imperialists.”

Former Bayan Muna Rep. Teddy Casiño recalled that the victory of June 1898 and the declaration of independence was short-lived because the Filipino people were betrayed by the United States.

“They told us that they would help in our struggle, but they bought the country from the Spaniards for $20 million. From 1898 to 1946 the Philippines was a US colony. In 1946, amid continuous Filipino struggle for independence, we were granted that but in exchange, our government signed agreements that included giving the US license to build and maintain military bases till 1991, when the people and the Senate rejected to renew the US-RP Military Bases Agreement.”

But now the EDCA is bringing back the US bases, Casiño said. He countered the government’s oft-repeated assurance to the public denying that it will bring back the US bases. Casiño cited the content of EDCA itself, which says the Philippines will allow troops, training, transit, bunkering, maintenance of ships, communications, provisioning, and other activities as parties would agree.

“This is clearly a military base – where else can they bring in their troops? They themselves will construct the facilities. US troops will have the exclusive use, the operational control of locations. They have exclusive use, unimpeded access in certain facilities – what else will you call all that but their military bases?” Casiño said.

He added that while ordinary Filipinos have to pay rent to stay in a house or use a part of a building or grounds, the US forces, including their contractors, can stay rent-free, as per EDCA. “While Filipinos groan with the ever increasing utility bills, the US forces’ use of electricity, equipment, and telecoms in their bases here are tax-free. They are free to build their own telecoms system; they do not have to pay for using the radio spectrum, which our telecom companies pay lots of money for. And this agreement will automatically be renewed after 10 years,” said Casiño.

Casiño and all other progressive mass leaders who spoke at yesterday’s Independence Day protests described the signing of EDCA as a betrayal.

“The EDCA is not for the Philippines but for the geopolitical interest of the US,” said Raymond Palatino, former Kabataan Partylist, during the Independence Day program at Kalaw Ave. He recalled that even before the signing of EDCA, American forces and their warships and drones are already present and visible in various parts of the country. With the declared US pivot to Asia, the EDCA is to play a major role, said Palatino. As do the Trans-Pacific Project (TPP) being spearheaded by the US,” he added. 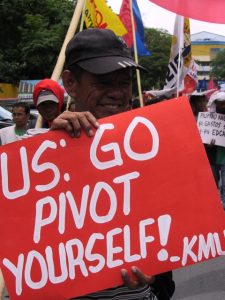 “Through TPP, the US aims to open more the Asia-Pacific markets for plunder, profit of big oil companies, among others.”

Piya Malayao, spokesperson of KAMP, said in Filipino, the EDCA strategically digs into issues of Philippine sovereignty and economy. On top of giving US forces the whole country for a floating base with which to project its power over the Asia-Pacific, the presence of US troops would advance the US’s economic interests too.

According to Malayao, indigenous peoples from north to south bear witness and suffer the impact of US companies’ expanding mining operations, energy investments, and rolling out of plantations. She cited as examples the mining operations covering thousands of hectares in the Cordillera of American company Phelps Dodge, and in Compostela Valley, the two thousand hectares mine site of Russell Mining. She also cited the current 25 thousand hectares being used for the operations of a geothermal plant by power giant Chevron Texaco in the Cordillera. Chevron is reportedly seeking to expand by 75 thousand hectares more in Benguet province.

In South Cotabato, Malayao cited the 16,000 hectares occupied by American DolePhils, which is also currently expanding in the Visayas.

“When we talk of EDCA’s economic thrust, its intent is clear. President Aquino has committed treason, he has betrayed us when he promised our lands to US companies and US forces,” Malayao said. 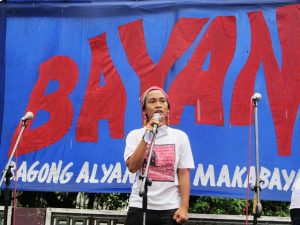 She recalled that in areas where mining, energy investments and “plantations are present, so are government troops serving as ‘investment defense forces.’ The entry of “development aggression” is resulting to massive loss of ancestral lands and livelihood of the indigenous peoples. Malayao said its incursion means plunder of our natural resources and people, and killings and human rights violations for those who stand in the way of these investments and troops.

For pushing for such a destructive economic program, “death to the plunderers” and “Oust the US-Aquino regime” are what the indigenous peoples have been calling for, Malayao declared.

The daylong protest held amid intermittent rains yesterday near the US embassy in Liwasang Bonifacio and then in Mendiola (Chino Roces) Bridge formed part of what the Bagong Alyansang Makabayan (Bayan) described as a nationally coordinated Independence Day protest. In a statement, Bayan vowed to “defeat EDCA in the courts, in the streets and in the areas where the US military facilities are to be built.” 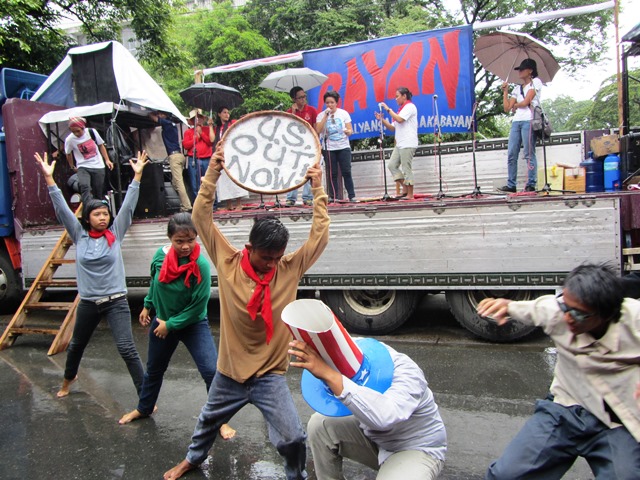 Bayan said they intend to bring the fight against the return of the US military bases to the areas where these are to be built. Initially, this would include Zambales, Pampanga, Nueva Ecija, Palawan, Socsksargen, Zamboanga and Cavite.

“We will organize and mobilize people in the communities in and around the so-called ‘agreed locations’ where the US bases are to be built. We will oppose the deployment of US troops and construction of US military facilities in these areas. We will ensure that US troops are not involved in local counter-insurgency operations, human rights violations, prostitution and other social vices,” Bayan said in its statement.