MANILA – “Use it or lose it.” That is how President Benigno “Noynoy” Aquino III regarded the budget allocated by Congress to projects listed in the General Appropriations Act. In his primetime televised speech Monday night, he bewailed the length of time it would take before “savings” become available for spending on other projects if the executive branch of the government follows the law and usual processes.

Under the law, savings can only be declared after Dec 31st, Aquino said. Follow that up with bidding and procurement and other processes for transparency and the said “savings” would be available only by September the following year.

Citing Book 5 Chapter 6 of Administrative Code of 1987, Aquino insisted that as president, he is allowed to realign savings. (Update: Bayan Muna Rep. Neri Colmenares said the cited code cannot be used to trump the Constitution.)

Aquino also insisted that the SC ruling, which he questioned, has also cited the “operative fact doctrine” which he interpreted as a ban covering only future activities, and not those previously implemented “in good faith.” (Lawyer Harry Roque has previously said Aquino cannot use this doctrine to evade liability, based on the SC ruling.)


At Plaza Miranda, much of Aquino’s speech which defended DAP and questioned the Supreme Court ruling that struck it down as unconstitutional was met with hoots of disbelief and cries of fury. Members of various progressive peoples’ organizations gathered at Plaza Miranda to listen together to Aquino’s speech, hoping he would finally admit accountability, among others. These groups have been demanding for Aquino’s accountability and culpability over the implementation of the unconstitutional DAP. They have been asking for a speedy and impartial probe of where Aquino took “savings” from and the supposed allocations and projects to which the DAP funds were spent.

Aquino mentioned some examples of where the DAP funds went, but as various mass leaders in Plaza Miranda pointed out, Aquino failed to mention the P200-million to P6-billion ($4.6M to $1.4B) “bribe” money for ousting former Supreme Court Chief Justice Renato Corona, among other questionable fund releases.

The DAP, contrary to Aquino’s claims that it helped the economy, had brought at best a negligible effect, at worse, according to Anakpawis Rep. Fernando Hicap, DAP funds were used by big landlords (such as the hacienderos of Cojuangco-Aquino owned Luisita), and by big investors invited here by the Aquino government, including Aquino “cronies.”

Vencer Crisostomo, Anakbayan chairman, said Aquino did not mention in his speech defending DAP the P2 billion ($46M) for Tarlac construction and repairs (home of Cojuangco-Aquino’s Hacienda Luisita), P4 to 5 billion ($92M to $115M) for trains when the Department of Transportation and Communication had no budget for that, the funds allotted for Aquino government’s counter-insurgency project Pamana Program, the P20 billion ($460M) “grassroots” funding for the Department of Interior and Local Government from which accused scammer of pork barrel Janet Lim-Napoles allegedly received P425 million ($10M) How do these funds benefit the ordinary people? asked Crisostomo.

The youth leader reminded Aquino that what he did with DAP was illegal, that DAP amounted to stealing from the budget to hand the funds over like a reward to Aquino’s cronies and projects which the Filipino people do not really need.

“The 177-billion ($4.1B) DAP funds were seized from budgets of education, health, and other services Filipinos sorely need,” Crisostomo said, He added that this amount is way way bigger than former President Gloria Macapagal-Arroyo’s scam, and certainly much bigger too than the PDAF funds (Priority Development Assistance Funds for legislators).

Against claims that Aquino did not gain money from the DAP, Joms Salvador of Gabriela said that this early, it is clear that Aquino has gained politically through DAP, in that it bought him greater political power. “Why commit a crime without gaining anything?” she asked.

No one from the progressive groups bought Aquino’s justification for DAP, or what Aquino likened to his government’s “parking in a no-park zone to save a life.”

“Who did he save?” asked Dr. Beng Rivera Reyes of Health Alliance for Democracy (HEAD). She told Aquino: “Tell that to parents of children who are dying in public hospitals because you slashed their budget. Tell that to hardworking Filipinos who are increasingly being forced to let themselves be oppressed in other lands because there are scanty jobs here. “

“We don’t need a lying president,” said Alex Legaspi of Alliance of Concerned Teachers. He said that Aquino seized at least P7 billion ($161M) from the education budget, despite the sector’s glaring lack of classrooms, books and instructional materials, teachers and decent pay and benefits.

In his speech, President Aquino said his administration will appeal the Supreme Court ruling on DAP by filing a motion for reconsideration because he said the SC justices need to get “the entire view of the Constitution.”

The SC justices had voted 13 – 0 to rule last July 1 that salient points of Aquino’s DAP are unconstitutional. After two weeks of silence from Aquino himself following the SC ruling and growing calls for investigation and accountability, Aquino in his Monday speech told SC: “You should be with us in these reforms.” He was referring to what he calls as his government’s four years of “reforms.”

This earned him flak and angry mutterings among the progressive groups, whose leaders from Anakbayan chairman Vencer Crisostomo to Alliance of Concerned Teachers’ Alex Legazpi, Joms Salvador of Gabriela, Kadamay urban poor group leader Bea Arellano, Dr. Beng Rivera Reyes of HEAD, Garry Martinez of Migrante, among others, denounced Aquino as “thick in the face,” power-hungry, a liar, a danger to Filipinos, and worse, a wannabe dictator. 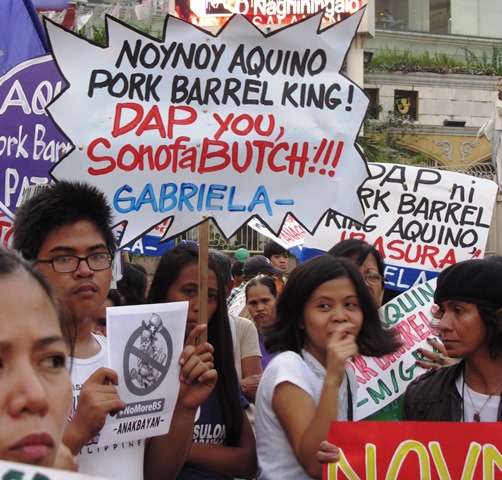 Anakpawis Rep. Fernando Hicap said President Aquino’s defense of his DAP shows that he “does not recognize the separation of powers.”

Hicap explained that only Congress is tasked by law to appropriate funds, but Aquino usurped that power when he implemented DAP by turning it into a presidential pork barrel. And then Aquino used the funds to increase his political power, Gabriela said.

Aquino has also directed the Supreme Court to hold the same view he has of what the president can do with public funds. Anakpawis Rep. Hicap said Aquino is showing signs of being a dictator. He said calls to oust this haciendero, Amboy and pro-foreigner president is correct indeed.