Datu Wilfredo Suminggil said he is “worried” that soldiers camping in their community in Sitio Kapatagan, Barangay Gupitan, Kapalong, Davao del Norte “would soon resort to torture and killings like what we have experienced before.”

Suminggil said the first group of soldier from the Philippine Army arrived June 19 and stayed in their village.

“There were 40 of them and they immediately spoke to me. They asked how life is and how are the NPAs (New People’s Army),” said Suminggil.

“I said life is okay and the NPAs pass by.”

Suminggil said he “honestly answered the questions by the soldiers.” Suminggil told the soldiers that “the NPAs advised us to go back to the old ways of communal farming so we could easily recover from the effects of Typhoon Pablo.”

Suminggil said Typhoon Pablo in 2012 uprooted most of their crops but they have easily stood on their own.

“We only got three kilos of rice from the government and we are so far away from the town center to ask for the help of well-meaning groups,” he said. Suminggil said to reach their village, one has to travel four hours in a motorcycle which costs P1,600 ($37).

“It has been our practice before but we used communal farming occasionally, not regularly.

Suminggil said the first time he talked with soldiers, “they said they are hunting rebels.”

Suminggil said “soldiers from the 64th Infantry Battalion (Philippine Army) in the 90’s were abusive.”

“Sergeant Balabala and Lieutenant Donor were ehind the beating of my nephew and others in our Sitio. One resident was hit with a patikan (rattan shoot) so hard in the back he urinated blood and died several days later,” he said.

Meanwhile, Lito Sampag, spokesperson of indigenous people’s group Karadyawan where Suminggil is also a member, said they “will leave their homes to protest if the military did not stop using the civilians as ‘shields’, encamping in civilian communities and other public structures like schools and churches.”

Sampag accused the Army’s 60th and 68th IB as responsible for the killing of Wilfredo Estrebillo, a motorcycle driver, last June 4 also in Barangay Mabantao in the same town.

“Their presence brings threats and several violations to the rights of the villagers,” said Sampag in an emailed statement to the media.

Karapatan Southern Mindanao, a human rights alliance helping Karadyawan, said they are “documenting all the reported cases of human rights violations in the areas so that appropriate legal actions will be filed against the perpetrators.”

But for Lieutenant Coronel Norman Zuniega, commander of the 10th ID’s Civil-Military Operations Battalion Philippine Army, “there were reported incidents and complaints from the residents of Brgy Gupitan, Kapalong, Davao Del Norte about intimidation, coercion, extortion and recruitment, allegedly by the armed group NPA.”

Zuniega said in a statement sent to the media that “Local Government Officials and Agencies reported having had serious difficulties in the delivery of basic services and infrastructure projects due to the presence of armed group.”

Zuniega said soldiers under the 60th IB were deployed in the area last July 18, 2014 “after a multi-stakeholder’s consultation.”

He said that “7 am of July 29 2014, the NPA detonated an improvised landmine in Sitio Kapatagan, Brgy Gupitan, Davao Del Norte killing two of soldiers and wounding six others.”
Zuniega said that indigenous people “are under constant intimidation and coercion of the NPAs, and they are also often organized for protest actions and other activities of KARAPATAN, BARUG KATAWHAN, and other organizations under the Communist Party of the Philippines’ legal umbrella in urban areas.”

Zuniega said that soldiers have “identified concerns from the residents, mainly on roads, electricity, water system, livelihood” and reportedly accused the NPA of using “school classrooms for teach-ins and revolutionary activities, disrupting the schedule of students and causing fear among them.”

Zuniega said “We challenge the groups who claim to champion people’s rights, especially KARAPATAN, that if you are truly concerned about the rights of the people, help us disarm the NPA.” 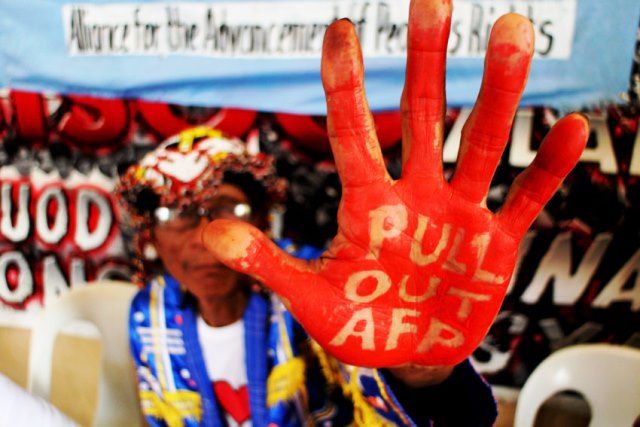 Suazo said “they (lumads) have been disrupted by militarization, 4th SF (special forces battalion), 60th IB and 68th and making them as shields versus the NPA.”
“Zuniega is definitely aware that he is a pathological liar. We dare 10th ID-AFP to support the call on the resumption of the peace talks between GPH-NDFP,” said Suazo.(davaotoday.com)