A city for children 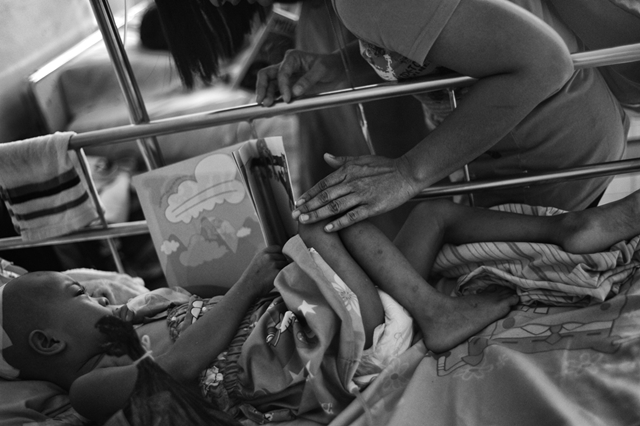 This is a story of young boys and girls and it begins in a room with a pastel green door and walls with hot air balloons, flowers and robots and a crawling pink crab. 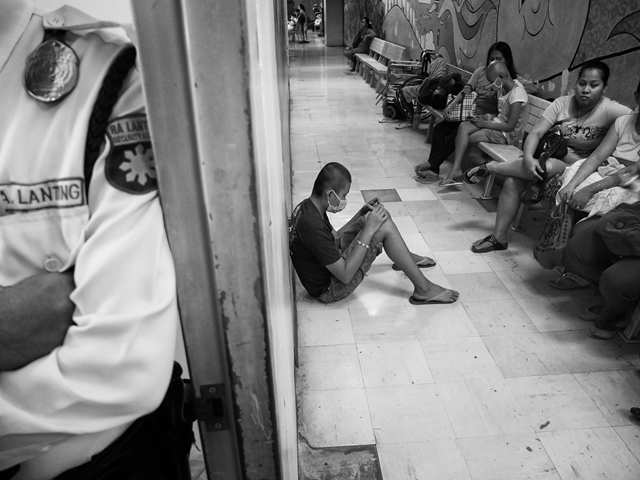 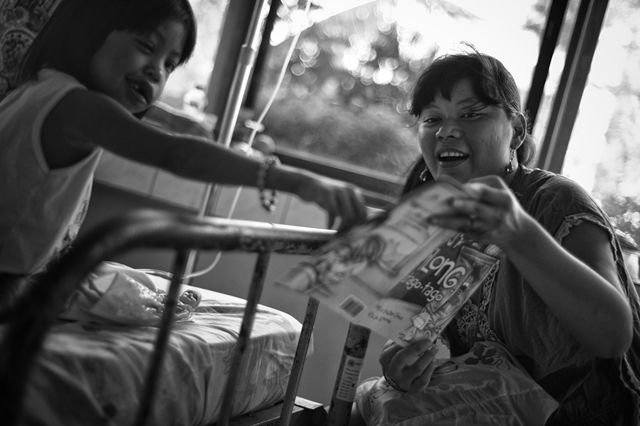 Angel, 13, steps inside the smaller room with a yellow door. It is Friday, a school day but this is not a classroom, where children learn math or science or the Chocolate Hills and the three islands of the Philippines.

In the room, there is a woman in a crisp white laboratory coat waiting for Angel, ready with a syringe. Angel has been in the same room the week before and the week before that and many other weeks before since September last year.

Today, she is wearing a purple floral sleeveless top so she doesn’t have to roll up the sleeves. She stands nonchalantly and takes the shot; she doesn’t cringe or cower. By now, she is used to the jab on her right arm. When she is done, she goes back to her seat, in a row of red plastic chairs in the waiting room with the pastel green door. She opens her borrowed tablet covered with its dusty violet leatherette and attempts once again to prevent an army of zombies from eating the brains of her plants. It is her favorite game; she plays it nonstop while waiting here. She will wait for another doctor to call her name. There will be another procedure to check her blood.

Angel has leukemia, diagnosed in September last year. It was an ordinary night with fever, says her father. But it was no ordinary fever, the thermometer stayed at 40 degrees Celsius. She is bald now. Her thick black hair that once cascaded down her shoulders is gone because of chemotherapy. 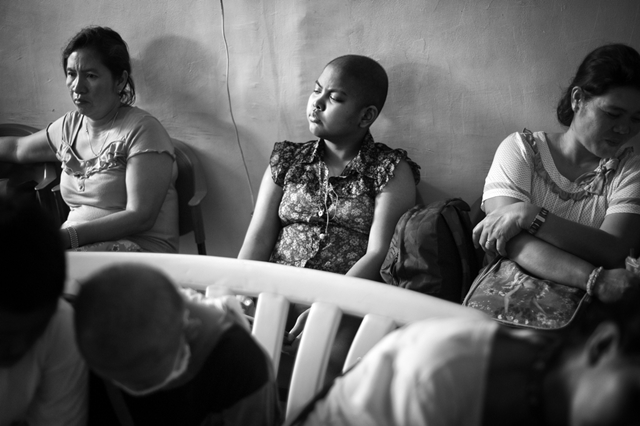 Welcome to the Cancer and Hematology Center of the government-ownedPhilippine Children’s Medical Center (PCMC) in Quezon City, a decrepit building with faded walls of red, blue and yellow and the names of the Marcos children, built decades ago with the help of Elizabeth Taylor.

Angel is one of roughly 100 cancer patients seeking treatment here every day.

“Every day, there are 200 to 300 out patients that come here. Of which, 100 are cancer patients,” says Jara Corazon Ejera, deputy director of PCMC.

Angel’s father, Armando is a tricycle driver but he has stopped driving to take care of his daughter. If he could, he would still ply the roads of Bulacan but not anymore. He needs to bring Angel to the hospital almost every week or more often than that.

They live in a borrowed room, in far-away Bulacan, in the northern part of the country, two hours away from PCMC.

In the mornings, they leave the house even before the roosters wake up because the queue can be long. Armando says he and his wife choose to bring Angel here because the cost of treatment is half the price or even less compared to private hospitals. And the doctors are good and kind, he says.

Miriam, mother to 11-year old Johnell also leaves their home in Caloocan at 5 in the morning to beat the long lines. But for Johnell’s chemotherapy, there is no other choice except the PCMC.

“I asked around in my neighborhood. They told me PCMC is good. And it is. I’ve seen the doctors here. They are really good,” she says.

Miriam used to work in Dubai as a domestic helper but she had to go home when she learned of Johnell’s leukemia.

Parents like Miriam and Armando usually have to stop working so they can take care of their children full-time. The children have to stop schooling until they get better. 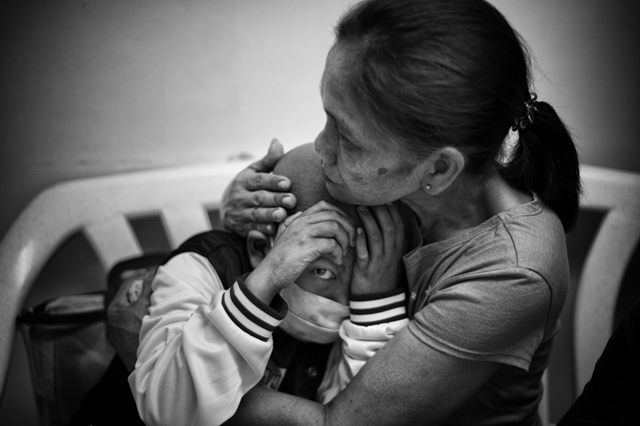 There’s no fixed schedule for treatments. Sometimes, their children turn pale in the dead of night, in the stillest of hours, in the most quiet of moments, in between dreams and nightmares. When that happens, they have to rush their children to the hospital. The costs just keep on spiraling because leukemia patients are so fragile that they cannot take public transportation. It is too dirty. It is too tiring.

“We have no choice but to pay for a cab,” says Armando.

During treatment at PCMC, their children go through several procedures, which can sometimes take the whole day. To save on costs, they bring lunch and snacks. Whatever money left is used to pay for the treatment and medicines.

Miriam says she cannot afford to bring Johnell in a private hospital because the costs are higher.

More than that, she says, she is at ease at PCMC because the doctors are kind to her son.

“They know what they’re doing,” she says.

The doctors are warm and gentle, all smiles in their white laboratory coats. They know the children by their names: Angel, Shyli, Johnell, John, Faye, Catherine.

Johnell is getting better but he wears a mask so his health does not deteriorate, Miriam says. 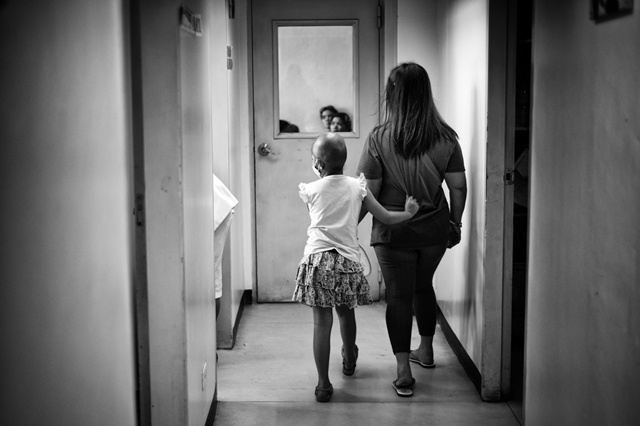 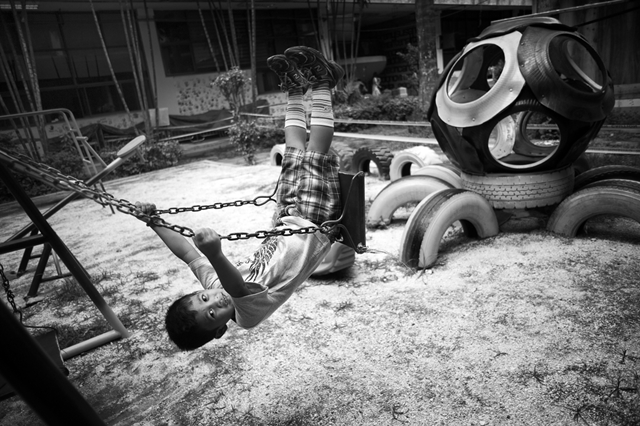 PCMC has been serving 40,000 to 50,000 children patients yearly. Yet the land on which it stands has drawn the interest of business groups, putting the institution’s future uncertain.

The 3.7-hectare area where the hospital stands is part of the Quezon City Business District, which the local government said, is envisioned to have more than 250 hectares of mixed-use development.

The lot, at the corner of Agham Road and Quezon is owned by the National Housing Authority (NHA)

NHA, according to Quezon City’s blueprint for the CBD, has a joint venture with Ayala Land Inc. to develop the 29.1-hectare North Triangle property.

Last September 4, Health Secretary Enrique On a told a hearing at the House of Representatives that the hospital is staying put and that there is no more intention to transfer it.

Instead, the hospital would be rehabilitated and modernized. However, he could not categorically say whether or not the plan has been shelved for good.

In the meantime, the children and their parents are keeping their fingers crossed that PCMC will stay where it is. 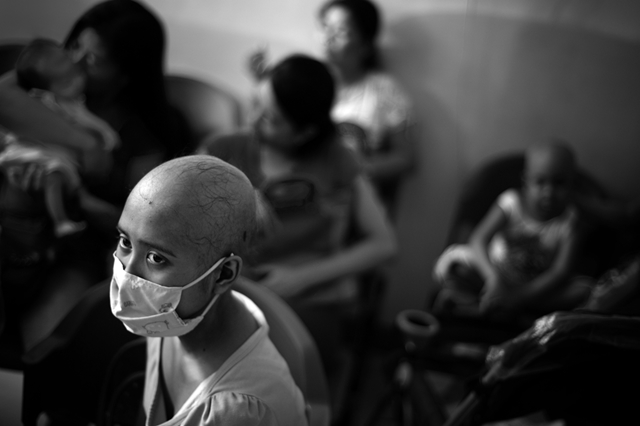 In one corner of the Cancer center, by the window, nine-year old Shyli sits patiently, waiting for her turn with another doctor. She just had a shot of chemotherapy but it isn’t over. Another doctor will check her. She asks her mother to massage her arm. It is hurting, she says.

In the waiting room, there are children everywhere. Some are sleeping, some are playing, some are lying about; some are in wheel chairs, injected with dextrose while some are covered with masks or pink headwear. Some are writing and drawing shapes or hugging brown teddy bears given by strangers earlier this morning, while waiting for their turn in the pastel colored doctors’ rooms.

The fetid smell of medicines wafts in the air. It is intoxicating to most visitors but the children and their parents are used to the dizzying stench.

The mothers and fathers know each other, not by their names but the same stories they share. By now, they see each other every week, every two weeks or every month, depending on the platelet count of their sons and daughters, depending on the color of their faces, the hemoglobin level or their body temperature.

Sometimes, the day comes when somebody stops coming. The child does not make it and there is an empty seat in the waiting room. 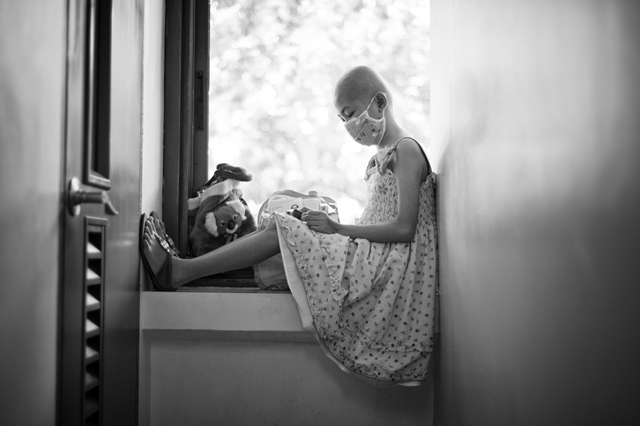 But everyday, another child, a new patient arrives. Here in the waiting room, the one with the pastel green door and walls with hot air balloons.

Roadtopuka.com is a collection of collaborative reportage stories, assignments and travelogues of documentary photographer Jes Aznar and writer Iris Gonzales.

Iris Gonzales is a Manila-based journalist and blogger, writing mostly economic, development and human interest stories. She works as a reporter for The Philippine Star. At present, she covers public finance and the macroeconomy but she also writes other stories here and there. She is also a regular blogger of the London-based New Internationalist.

Jes Aznar is a full time documentary photographer based in the Philippines. Focusing mainly on the Philippines’ feudal present and the hegemony of conquering powers, he travels and shoot to find his country’s place in this new globalized order.

After quitting a lucrative job in advertising to pursue photojournalism, he has since then worked for Agence France-Presse, New York based Reflex News agency and gmanews.tv. His works has been published on the pages of The New York Times, International Herald Tribune, Time Magazine, Newsweek, Wall Street Journal, Stern, The Washington Post, The Guardian, and Asia Geo magazine, among others.