The public-private deal concerning LRT will give the Ayala-MVP Group the benefit of the government’s official development assistance (ODA) in financing more than half of the total project cost of about P65-billion. The government committed to shoulder the right of way acquisition, purchase of coaches, civil works, among other expenses.

MANILA — The Aquino government and the Light Rail Manila is set to sign today the contract for the P64.9 billion ($1.45 B) LRT-1 Cavite extension project, with private concessionaire’s takeover of LRT Line 1 thrown in as one of the sweeteners. And the sweeteners abound in the deal, at the expense of the riding public and taxpayers.

Meanwhile, in protest of the privatization of public transportation, members of Anakbayan Metro Manila held yesterday what it calls as “Mass TransPROTESTA” at the MRT North Avenue Station.

“We don’t oppose the extension and development of the train, we are against the fact that the public service is being transformed into a money-making scheme through Public Private Partnership projects,” said Christian Lloyd Magsoy, chairman of Anakbayan Metro Manila.

The group held a program at MRT North station. They hung a big streamer near the station with the message: “May pondo sa korapsyon wala sa pampublikong transportasyon kaya #MRTBULOK.” (There are funds for corruption but none for public transportation that’s why these are breaking down.) Members of Anakbayan held their placards and performed interactive chanting with passengers.

The Edsa-bound, privately owned and controlled MRT is newer compared to LRT-1, but it has been putting its passengers at risk because of allegedly anomalous maintenance contracts entered into by transportation officials and private companies. MRT’s case shows “a textbook illustration of what happens when profit rules over what is supposedly for social service,” said Sammy Malunes, former employee of LRT 1 and convenor of RILES Laan sa Sambayanan Network. 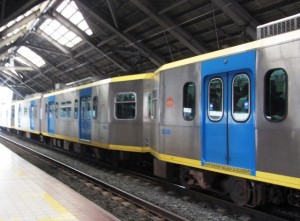 Ibon Foundation said the Aquino government has given all-out concessions to the Light Rail Manila Consortium, led by the Ayala Corp. and Manny Pangilinan’s Metro Pacific Investments. The research group belied the impression created in various news releases concerning the consortium’s planned spending of P39.4 billion ($881 M) and billions more in operating and maintenance expenses. When you look into the contract, Ibon said, in reality, the government is actually shelling out more than the MVP-Ayala Group.

The billions of pesos committed by the government for the LRT expansion to Cavite and LRT 1 expansion (of coaches, etc.) will be paid for by people’s taxes. The public will be paying more for the deal. But under the public-private deal, the riding public will not share in the profits from their investment as the private concessionaire is the one in control. Instead, the public will be faced with increased fares.

“The consistent ‘logic’ in PPP is the government wants to give businesses all subsidies and let all income and profits to be generated (by the projects) to go to the private sector, Sonny Africa, research director of IBON, told Bulatlat.com in an interview.

According to Ibon, the public-private deal concerning LRT will give the Ayala-MVP Group the benefit of the government’s official development assistance (ODA) in financing more than half of the total project cost of about P65-billion ($1.45 B). The government committed to shoulder the right of way acquisition, purchase of coaches, civil works, among other expenses.

This means that Light Rail Manila benefits from lower borrowing costs of the government from the ODA, aside from an additional P5 billion subsidy for “viability gap funding.”

The MVP-Ayala Groups also enjoys various perks such as real property tax exemption, estimated at P64 billion ($1.43 B) for the duration of the contract, an annual stand-by fund, differential generation cost for power spikes, among others.

Government has committed to shoulder all these costs, which, Ibon Foundation said, will eventually be recovered through fare adjustments or fare hikes for commuters and through higher taxes for the public.

The LRT concession agreement allows the Ayala and Pangilinan consortium to implement automatic and regular fare increases, starting with the implementation of the so-called notional fare. This means fare hikes, said Ibon Foundation, as this provision is set to increase fares up to 101.7 percent per trip depending on the route.

The agreement also allows Light Rail Manila to have regular adjustments in the notional fare, adjust it according to inflation rates, and pass on the cost of power fluctuations, among others. Upon completion of the LRT Cavite construction, the agreement will grant another five percent fare hike.

The agreement also allows Light Rail Manila to pass on the value-added tax (VAT) through increased fares to be shouldered by commuters.

Ibon Foundation warned that even if a government agency decides on a fare that is lower than the applied amount, Light Rail Manila can collect its notional fare. The public-private contract guarantees that.

The contract provides that the government will pay the MVP-Ayala consortium a “deficit payment” to cover the gap. Ibon Foundation calls it a form of a “regulatory risk guarantee” promised by the Aquino government in all its public-private partnership (PPP) investors.

According to Ibon Foundation, the economic benefits of mass transportation system are recognized even by the government. The DOTC itself said that, even if the LRT and MRT are not profitable, they play a vital social and economic role.

Given that view, the research group asks, “Why is the government defaulting on its responsibility of mass transport and turning it over to private corporations for massive profit-making?”