The word “Endo,” short for “end of contract,” was declared in “Sawikaan 2014: Pagpili ng Salita ng Taon” as the second word of the year. This word leaves a bitter taste in the mouth of Filipino workers whose various groups united to protest the incidences of “Endo” on Oct. 7, world day for decent work.

MANILA – If language is evolving to suit current trends, then this particular trend that gives rise to “endo,” second among 2014’s new word of the year, should already be history. The sooner, the better, according to statements of workers’ groups, the sector that lives with and suffers much from “endo.”

The word “Endo,” short for “end of contract,” was declared in “Sawikaan 2014: Pagpili ng Salita ng Taon” as the second word of the year. This word leaves a bitter taste in the mouth of Filipino workers whose various groups united to protest the incidences of “Endo” on Oct. 7, world day for decent work. 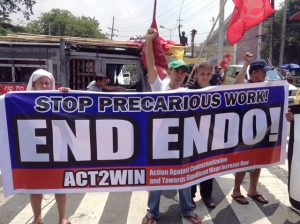 The International Labor Organization defines decent work as productive work for women and men in conditions of freedom, equality, security and human dignity. Decent work “involves opportunities for work that deliver a fair income; provide security in the workplace and social protection for workers and their families. It offers better prospects for personal development which also encourage social integration; give people the freedom to express their concerns, to organize and to participate in decisions that affect their lives; and guarantee equal opportunities and treatment for all.”

The opposite of decent work is “precarious work,” with contrasting condition to what ILO described in decent work.

Filipino workers say one of the single biggest stumbling blocks to having decent work is the employment practice that gives rise to ‘endo.’ Contractualization or having endo every three to five months, means workers have little to no job security, little to no union rights (since employers can easily fire them, assuming the workers managed to form a union and trace links to their real employers and not just their contracting agencies). Without union rights, they have little to no say in their job condition. Contractual workers also often lose out on benefits such as paid leaves, social security, health insurance, retirement pay.

In the Philippines as in other countries, part-timers, contractual, casuals and agency-hired workers comprise the ranks of workers more likely under ILO’s precarious work. They are present in all industries and sectors, from industry, agriculture and services, in public and private sector. In fact, the government’s category for “unpaid family workers,” and other self-employed, may also be made up largely of people in precarious and thus not decent work.

Various estimates peg their number from two to three of every five employed Filipinos.

Protests at the gates of Malacañang, labor department, industrial enclave

A workers’ alliance, Action against Contractualization and Towards a Significant Wage Increase Now (or ACT2WIN!), marched on Oct. 7 to Mendiola Bridge near Malacañang proposing to scratch out the 2014 second “word of the year” and consign it to history as soon as possible. They carried long streamers with the message “End Endo” and they called for a national living wage. Based on their experiences, “endo” and living wage are inversely related. The more the workers get “endo” (typically every three to five months), the less likely he or she gets the chance to earn a living wage.

As the progressive labor center Kilusang Mayo Uno has repeatedly said over the years, contractualization means starvation wages. Although contractual workers perform the same jobs being done by regular workers, they often get lower wages, just the minimum wage in their region or province or even lower, as Southern Tagalog workers’ groups said when they opposed Aquino’s two-tier wage system. 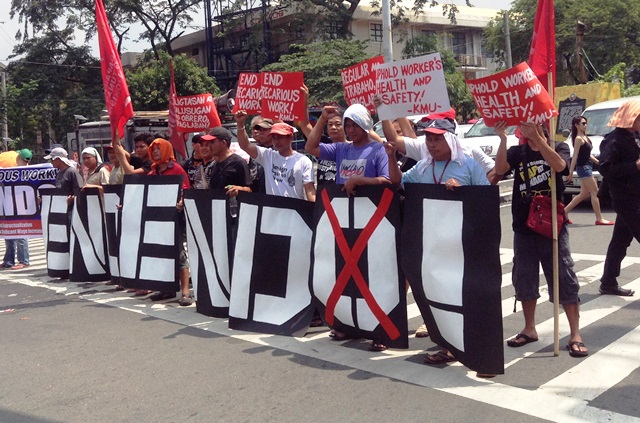 One of the proposed legislation’s highlights is criminalizing the contractualization of jobs done merely to get around the workers’ right to be regularized on a job. The country’s labor code provides that a worker performing a job which is crucial to his or her employers’ business should be declared regular on the job after he or she has satisfactorily met requirements of the fixed period of probationary and apprenticeship period.

But workers doing their employers’ crucial jobs are now variously called “talents,” project-hired, “confidential employees,” special teams, among others, and they become “permanent contractuals.” Bulatlat.com reports have interviewed contractuals who have worked in the same company for decades.

Department of Labor and Employment (DOLE) data show that there is an increasing proportion of part-timers, casual and contractual workers from 1989 to 1997. From 13.7 percent non-regular employment (as percentage of total employment) in 1989, it rose to 20.9 percent in 1997 and it is currently estimated to be between 40-60 percent, and still increasing.

Filipino members of IndustriALL Global Unions who picketed in front of DOLE on Oct. 7 said non-traditional, non-standard form of employment relationship directly assaults the tenure rights of workers. Demanding for more jobs that are also “more secure,” the Industriall Global Union members in the Philippines picketed DOLE as their solidarity action on the global call to “STOP Precarious Work.”

The Metal Workers Alliance of the Philippines (MWAP) held a motorcade also on Oct. 7 from Paseo to Balibago, Sta. Rosa, Laguna, a province south of Manila where special economic zones abound. MWAP estimates that up to 90-percent of workers in economic zones are contractual. It said in a statement that in industries such as electronics, garments, retail and business process outsourcing, some 80-percent are contractual workers and most of them are women.

“For many workers, contractual employment is the face of the lack of decent work in the Philippines. We are calling on all workers and Filipinos to continue to fight for regular employment,” said Sonny Matula, president of the Federation of Free Workers, another ACT2WIN! member.

“We are glad that ‘endo,’ which has been a reality for workers for decades now, is finally recognized as word of the year,” said Elmer “Bong” Labog, chairperson of labor center Kilusang Mayo Uno, an ACT2WIN! member. He believes recognizing ‘endo’ as a word is like naming and identifying a disease or problem, which should be followed by treatment or solution.