Five years after the Magna Carta for Women was enacted, much is still wanting in its implementation because of its gaps.

MANILA — “…the State realizes that equality of men and women entails the abolition of the unequal structures and practices that perpetuate discrimination and inequality. To realize this, the State shall endeavor to develop plans, policies, programs, measures, and mechanisms to address discrimination and inequality in the economic, political, social, and cultural life of women and men.” – Chapter 1, Section 2 of Republic Act 9710 or the Magna Carta of Women

When the Magna Carta of Women (MCW) was enacted in 2009, one of the issues it wished to address was the widespread discriminatory and derogatory portrayals of women in various forms of media.

Five years after the law was signed, have things changed for women and the media?

In 2013, TV host and comedian Vice Ganda got flak over his gang rape joke on broadcaster and news executive Jessica Soho. He was slammed for trivializing rape and making it the subject of his joke in one of his major concerts. The issue eventually died down after the comedian made a public apology and Soho opted not to file any charges.

Recently, two of the country’s biggest companies drew ire of citizens, personalities, and various women’s rights groups for their anti-women products and activities.

SM Mall, one of the largest mall operators in the country, was criticized for selling shirts with printed statement “It’s not rape – it’s a snuggle with a struggle” in their department stores. While Bench, one of the biggest local clothing lines, was likewise panned for holding a fashion show which featured hyper sexualized women. Worse, it featured a popular actor pulling a woman on a leash. 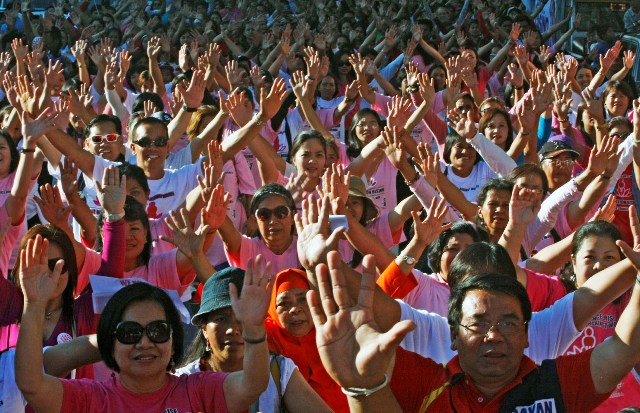 Various women’s organizations and women’s rights advocates have expressed rage against SM Mall and Bench, both offline and online. However, the government has not made any concrete action to penalize both companies.

Gabriela Women’s Party representatives Emmi de Jesus and Luz Ilagan filed a resolution at the House of Representatives urging the Committee on Women and Gender Equality and the Committee on the Welfare of Children “to jointly investigate current government programs and agencies that monitor and enforce violations of laws that protect women and children committed by private parties such as shopping malls and event organizers.”

In the mandate of the Magna Carta of Women, the Philippine Commission on Women (PCW), the state’s primary agency on women and gender equality concerns, and the Commission on Human Rights, the state’s Gender Ombudsman, are the two principal agencies tasked to take the lead role in overseeing the implementation of the law.

In relation to the Bench and SM Mall controversy, the PCW quickly released a statement condemning the Bench fashion show but has not committed to any action to penalize the company. Meanwhile the CHR, has not released a single statement nor did it initiate an investigation.

In an interview with Twylah Rubin of the Commission on Human Rights Investigation Office, she revealed that the CHR has already an advisory, which she drafted herself, however it is still pending for approval.

According to Rubin, the advisory calls for a dialogue with Bench and SM Mall managements to explain and cooperate in the investigation that they will conduct.

Rubin, however, emphasized that their power as monitoring and implementing agency has limitations. “In cases like this, we can only initiate an investigation and make recommendations. The power to hold the offender accountable is not in our hands.”

“If you will look at the mandate of the CHR, we investigate, conclude and make a resolution, and then recommend to the executive or to appropriate agencies what can be done about the case,” she added.

Gabriela spokesperson Joms Salvador pointed out that aside from the limited power of government agencies, among the reasons the Magna Carta of Women has not prevented unfair portrayals of women in media and other cases of violence and harassment against women is that because there are gaps in the law.

Salvador said, referring to the recent incidents involving Bench and SM Mall, “Although it is clear that it has violated the Magna Carta of Women, the problem is that these incidents are neither television shows nor advertisement materials, which means these are not specifically identified as items to be monitored and regulated.”

Salvador added that while there are specifications in the monitoring of discriminatory and derogatory portrayals of women in media, it did not include events such as fashion shows or merchandise products such as statement shirts. “The law is limited to those that are broadcasted or showed in television, radio, film, advertisement, and printed materials.”

Section 19 of the Magna Carta of Women ambiguously discussed the non-discriminatory and non-derogatory portrayal of women in media and film:

“The State shall formulate policies and programs for the advancement of women in collaboration with government and non-government media-related organizations. It shall likewise endeavor to raise the consciousness of the general public in recognizing the dignity of women and the role and contribution of women in the family, community, and society through the strategic use of mass media.

For this purpose, the State shall ensure allocation of space, airtime, and resources, strengthen programming, production, and image-making that appropriately present women’s needs, issues, and concerns in all forms of media, communication, information dissemination, and advertising.

The dignity of women and their roles and contributions in all spheres of private and public life shall be promoted. The portrayal of women in a discriminatory, demeaning and/or derogatory manner in advertisements, shows and programs is not allowed. It shall not induce, encourage and/or condone violence against women in any form and/or the violation of their human rights.”

However, none of these documents tackled discriminatory or derogatory portrayals outside the dominant forms of media, which are film, television, radio, printed news and advertisements.
Salvador emphasized that penalties imposed on violators are not also clearly stated, especially if the violators belong to the private sector, which was the case of SM Mall and Bench.

The third paragraph of the Section 42 of the Magna Carta discussed the penalty process for private individuals and entities:

“CHR shall establish the guidelines for the processing and handling of violations committed by private entities or individuals. If the violation is committed by a private entity or individual, the CHR shall forward its recommendation to the appropriate agency of the government. In violations which are considered civil cases, appropriate damages shall be determined by the proper court. As for those offenses which are criminal in nature, CHR shall assist the victim or complainant in the filing of cases and develop guidelines and mechanisms for such purpose.”

How are funds for women used?

Pursuant to the MCW, all government departments, including their attached agencies, offices, bureaus, state universities and colleges, government-owned and controlled corporations, local government units, and other government instrumentalities are mandated to use five percent of their total budgets in mainstreaming gender perspectives in their programs, policies, and projects.

However, Salvador raised concern on the proper usage of the Gender and Development (GAD) budget.

She said that although the five percent budget allocated to promote gender-responsive programs and projects is a laudable effort from the government, there is still a possibility that the funds will be misused, because it did not list specific programs or projects for which the funds can be used.

“The government should set parameters as to where the funds should be used. There are reported cases where local government use the funds in activities such as ballroom dancing and other unnecessary activities, whereas there are so many programs promoting gender awareness and advancing women’s rights that need to be pursued,” Salvador explained.

“The funds can be used to hold discussions on how to prevent rape, harassment, or any other forms of violence against women and children, instead of using it in holding parties,” she concluded.