“One year after, thousands of our kababayans in Yolanda-hit areas find it difficult to recover from the tragedy, receiving little or no aid from government. They remain insecure in their temporary shelter and have no means for sustainable livelihood.”

MANILA – If President Benigno Aquino III is to be believed, his administration has done so much for the rehabilitation and recovery of areas affected by typhoon Yolanda (international name Haiyan).

In his speech , Nov. 7 in Guiuan, Samar, Aquino said in Filipino: “When I visit areas affected by the disaster; when I look back where we came from and look at what has been achieved, it is becoming clear to me: Change is happening. Recovery is happening.”

On the same day, however, non-government organizations involved in disaster preparedness, response and rehabilitation showed the opposite of what Aquino stated.

In a forum at the University of the Philippines in Diliman, the Climate Change Network for Community-Based Initiatives (CCNCI) assessed government efforts in the past year.

Using government data, independent think-tank Ibon Foundation measured what had been achieved so far as against government targets.

Only 5,830 families have been provided temporary shelter by the Department of Social Welfare and Development (DSWD). The number is only 0.6 percent of over 918,000 displaced families.

Citing a report of the Office of the Presidential Assistant for Rehabilitation and Recovery (Oparr), Ibon Foundation said only 364 housing units have been completed by the government. This is 0.03 percent of more than 1.7 million damaged houses.

The CCNCI noted that the bunkhouses built by government are made of substandard materials, cramped and unsafe.

Suyin Jamoralin, CCNCI convenor and executive director of the Citizens Disaster Response Center, said, “One year after, thousands of our kababayans in Yolanda-hit areas find it difficult to recover from the tragedy, receiving little or no aid from government. They remain insecure in their temporary shelter and have no means for sustainable livelihood.”

Out of a million individuals whose livelihood had been affected by Yolanda, the DSWD employed more than 250,000 for its Cash for Building Livelihood Assets. More than 93,000 farmers and fisherfolk were provided tools, seeds and banca repairs. Combining these figures, the government extended help to 31 percent of those needing livelihood assistance.

The coconut industry has been the hardest hit in Yolanda-affected areas, with over 44,000 hectares damaged. The government replanted coconut seedlings to more than 12,000 hectares or three percent of the total area affected.

Even the structures providing basic social services had not been fully reconstructed. Of the 3,770 damaged schools, only 537 had been repaired or 14 percent of the total number of damaged schools.

It is much worse in health facilities. None of the 417 affected hospitals, rural health units and barangay health stations has been repaired.

Even the government’s own targets for infrastructure have not been met. 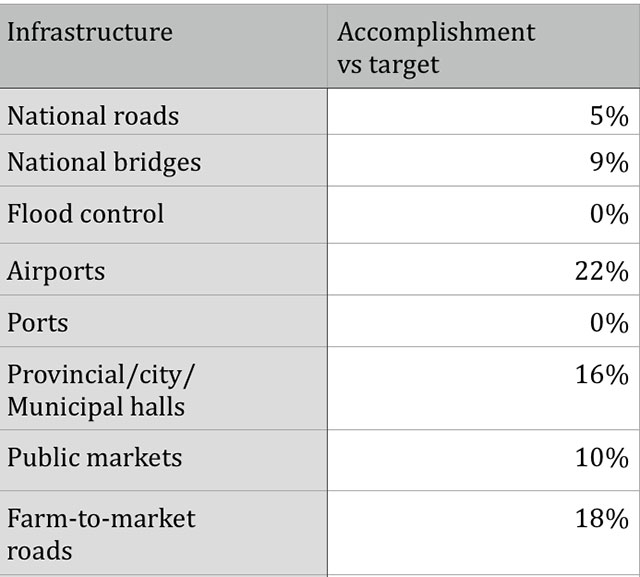 A separate research by the Center for Environmental Concerns (CEC) in the Eastern and Western Visayas regions corroborated Ibon Foundation’s findings.

The CEC, one of the member organizations of the CCNCI, conducted the field research in October in the municipalities of Calbiga and Marabut, both in Samar; Tanauan and Tacloban City in Leyte; and Estancia, Iloilo.

In terms of housing, the survivors in these municipalities, except for Barangay 37 in Tacloban City, have not been offered relocation. The two relocation sites offered by the local government, however, are hazardous areas. Hazard maps of Tacloban show that Barangay 37-A (Palanog Resettlement Area) stands on a fault line and is a very steep landslide area with 40 to 60 percent susceptibility. The Tacloban North in the northern barangay of Sto. Niño, meanwhile, is only 250 meters from the city dumpsite and is exposed to health and safety risks.

Rosario Bella Guzman, one of the directors of Ibon Foundation, pointed out that the government is not keen on complete rehabilitation and recovery of Yolanda-affected areas.

Guzman said that while the total damages and losses amounted to P571 billion (US$13 billion), the Aquino administration’s Comprehensive Rehabilitation and Recovery Plan (CRRP) is pegged at P171 billion ($3.8 billion). “This is way below the estimated needs,” Guzman said.

Guzman said that even before Yolanda, the Eastern Visayas is the second poorest region in the country. With the way the Aquino administration has been dealing with the tragedy, Guzman said, the poor people of Eastern Visayas have become more miserable.

The survey, conducted September 26 to October 8 in the provinces of Biliran, Eastern Samar, Leyte, Northern Samar, Western Samar, and Southern Leyte has a margin of error of plus or minus three percent.