To date, no one has been punished for the gruesome killings.

Dubbed as the #HLMX campaign, the series of activities aim to highlight the continuing injustice to the Hacienda Luisita martyrs. Seven farmworkers were killed when state security forces opened fire at the striking workers of Hacienda Luisita on Nov. 16, 2004. After the massacre, eight more workers and their staunch reporters were murdered.

After ten years, all the charges filed by the families of the victims had been dismissed by the Office of the Ombudsman. To date, no one has been punished for the gruesome killings.

Workers in other countries have expressed their solidarity with the Hacienda Luisita farmers. Peter Murphy of the Philippines Australia Union Link said in a statement, “With the reign of terror and impunity perpetually hanging over Hacienda Luisita, farm workers can only pin their hopes in their solidarity, the widespread community support they have, and the campaign to oust President Benigno S Aquino III, exposed as a corrupt and despotic landlord.” 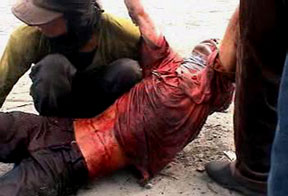 In a statement, workers organizations from the Philippines, Australia, Venezuela, Argentina, Senegal, Canada and the United States of America under the Commission 5 of the ILPS called on trade unions and workers everywhere to mark November 16 as a day to “protest vehemently against the continuing widespread attacks on trade unions across the world, which are attacks on our basic human rights.”

The Commission 5 of the ILPS said the Hacienda Luisita is emblematic of the conditions of the workers and peasants of the Philippines. The workers under this commission noted that President Benigno Aquino III was the manager of the hacienda at the time of the massacre.

In Manila, farmers and supporters will march from Espana ave. to the foot of Chino Roces (formerly Mendiola) bridge on Nov. 15. In the afternoon of the same day, a caravan will proceed to the vast hacienda controlled by the President’s clan for almost six decades. A solidarity cultural activity will follow suit. The next day, a program will be held inside the Hacienda Luisita.

The #HLMX campaign has also utilized the social media. Supporters posted on social media accounts such as Facebook and Twitter the #HLMX icon: a yellow ribbon with stains of blood.