“Do not push us to the wall because we have no other option but to fight back.”

MANILA — Kayod kalabaw (Working like an ox). This is how Norie Sabayan, math and computer teacher at the Maligaya High School in Fairview, Quezon City, described how he works so he could support the schooling of his three daughters. He is a single parent and what he earns is not enough to support his family.

To augment his income, Sabayan has to find a “sideline,” meaning extra work to have extra income. “I leave my house in San Jose Del Monte, Bulacan at 6 a.m.. After my class at 12:30 pm, I go to Mandaluyong for my sideline and then I come home at 10 or 11 p.m.. It’s very tiring. Sometimes I get so exhausted I fall asleep still wearing my uniform,” he said in an interview with Bulatlat.com.

Sabayan and many public school teachers share the same plight. He said they would not have to be dead tired at work only if the government heeded their long-time call for a salary increase.

On Nov. 14, Sabayan joined the nationwide sit-down strike of public school teachers pressing the government for a salary increase.

Benjie Valbuena, national chairman of the Alliance of Concerned Teachers (ACT) said if the government would still remain callous after their sit-down strike, they would escalate their protest to a mass leave.

“Do not push us to the wall because we have no other option but to fight back,” said Valbuena in an interview with Bulatlat.com. 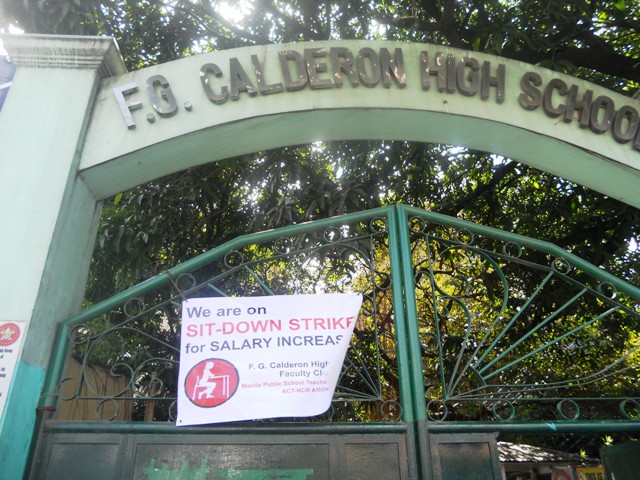 “We have exhausted all means; we lobbied for the enactment of House Bill 245, which provides for the upgrading of rank and salaries of teachers and non-teaching personnel, held dialogues with the Department of Education, from the division office, to the regional, up to the central office. We went to the streets carrying our banners, but the government is still not hearing us,” Sabayan said.

‘To strike is our right’

In Manila, Valbuena cited 100 percent participation in the sit-down strike by schools such as Manila Science High School, Calderon Integrated High School and Rizal Elementary School among others. “In Calderon (Integrated High School) we had a short program in the morning, we explained to the students our cause and they expressed support to our call,” said Valbuena.

In Quezon City, it was also successful as majority of the teachers joined, although some still have apprehensions, said Dr. Priscilla Ampuan, president of the Quezon City Public School Teachers Association.

In Ramon Magsasay High School in Cubao, Quezon City, teachers were told by the school principal not join the sit-down strike. A memorandum from the office of the Division Superintendent was released on Nov. 13 that read: “School heads are advised to exercise their authority to ensure that there shall be no disruption of classes in all levels by imploring teachers to avoid participating in any action that may interpreted as declining to discharge their function to teach.”

“To strike is our right; it is in the Constitution that Filipinos have the right to freedom of expression. We are only airing our grievances here because the government of President Benigno Aquino III has not heeded us,” Ampuan said in an interview.

In some schools, teachers gave the students activities to work on but still did not teach.

“So as not to be accused of abandoning our duty, we still went to our classrooms gave them [students] seat work,” said Shirley Forte, grade four teacher at Culiat Elementary School. She has been teaching for 24 years. She lamented that they would not have to escalate their action if there is support from the school principals.

“We have been rallying in the streets but t,he government is still not listening to us. Maybe if our school principals will stand for our right, will walk with us in the streets in protest actions, maybe the government will listen,” she told Bulatlat.com. She added that when their salaries will be upgraded, they too, would benefit from it.

Valbuena said news also reached him that a case will be filed against teachers who held a noise barrage in the Manila Science High School.

“If there is someone who should have a case here, it should be the government. They have violated the Magna Carta for Public School Teachers and the Salary Standardization Law,” he said in an interview with Bulatlat.com.

The Salary Standardization Law provides for a periodic review of the salaries of government employees, but this was not done under the Aquino administration, said Valbuena.

Valbuena also asserted that the teachers have the right to seek redress of grievances and the right to freedom of expression as stipulated in the Constitution.

Valbuena said teachers in schools in other regions also participated in the one-day sit down strike. In Quezon City, teachers gathered in front of the Quezon City Hall to also protest the delay in the local government’s release of their local benefits.

On Nov. 19, in time for the voting for the 2015 national budget, public school teachers will have a mass delegation and will join government health workers and employees in a protest action in the Senate.

“The government always tells us that there is no budget for salary increase. But we see that there is a lot of money under the Disbursement Acceleration Program (DAP) and the hidden pork barrel in the 2015 national budget. It is only right, comrades, that we unite to fight this insensitive and corrupt government,” said Robert Mendoza, secretary general of the Alliance of Health Workers who joined the protest at Quezon City Hall on Friday.