“The youth of today should live up to this history of militancy, and continue fighting against anti-student policies such as the continued deregulation and commercialization of education.” – Kabataan partylist Rep. Terry Ridon

MANILA – Hundreds of students from different colleges and universities – both private and public –gathered at the Liwasang Bonifacio in Manila to commemorate International Students Day on Monday, Nov. 17.

International Students Day was first celebrated worldwide in 1941. It is observed annually to commemorate the demonstration against Nazi and German occupation of Czechoslovakia by students of the University of Prague.

In this year’s commemoration, the students, led by the Rise for Education Alliance (R4E), lashed at the Aquino administration and its policies that continued the commercialization of social services such as education. The protesters said their tuition, coupled with various “dubious fees,” have become more unaffordable and a “heavy burden” to them and their parents.

“Many students have difficulty finishing their studies because of the needed money for tuition,” said Sarah Elago, president of the National Union of Students in the Philippines (NUSP). Tuition, Elago said, has become more expensive with added fees that are redundant and exorbitant.

“Through the years, ‘other school fees’ have morphed into a monstrous twin of tuition increases. These unnecessary fees are so prevalent that ‘other school fees’ actually comprise the bulk of the total semestral matriculation of students,” R4E said in a statement.

In March, the students of Eulogio Amang Rodriguez Institute for Science and Technology (Earist) gained victory when the administration was compelled to stop the collection of its developmental fee, eventually scrapping it after a series of protest actions joined by majority of the students.

Now, the students are calling for the refund of developmental fee collected from them for the school year 2013-2014. But their call fell on deaf ears. Rechil Paglinawan, of the R4E-Earist and a fourth year Business Administration major said the developmental fee is now called “enhancement fee.” Worse, she said, the student council and the faculty filed a resolution legalizing the collection of the “enhancement fee” worth P1,000 ($22).

In July, the Commission on Higher Education (Ched) Chairwoman Patricia Licuanan released a Clarificatory Statement on the Matter of Development Fees and Condition for its Implementation by Governing Boards of State Universities and Colleges that says “development fee collected for 2013-2014 should no longer be reimbursed.”

Other school fees currently collected in schools in Metro Manila: 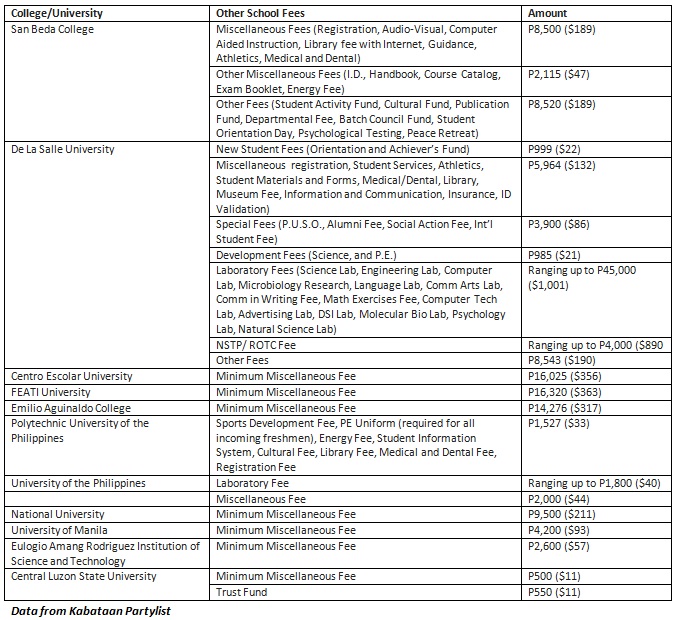 The premier state university in the Philippines is also charging other fees for its “scholars of the nation.”

In the University of the Philippines (UP) Diliman, the Department of Chemical Engineering collects P2,000 ($44) as laboratory fee (lab fee). Brylle Leaño, fourth year Chemical Engineering major said the lab fee is more expensive than his tuition, which is P300 ($6) per unit. He belongs to Bracket D of the socialized tuition scheme.

There is also a library fee (P1,000), internet fee (P250 or $5) and energy fee (P425 or $9). Leaño said the energy fee is for the payment of electricity, which is supposedly covered by the university’s maintenance and other operating expenses budget. He said everywhere in UP-Diliman there is also “saksak” (plug-in) fee or payment for every use of electricity within the facility of the university.

Prince Ragasa, deputy chief of staff of the Office of the Student Regent, said the university has also started collecting rental fees for use of the facilities of the university. He said legitimate student organizations in UP now have to pay for the use of facilities.

In Adamson University, no down payment, no subject reservation policy was implemented this semester, said Joaquin Sienes III, second year Psychology student. Down payment is worth P10,000 ($222). There are also “other fees” such as the cultural fee (P300 or $6), the energy cost fee and the aircon fee, which is supposedly already covered by 30 percent of the unit lecture fee from their tuition.

The students also decried campus repression as they fight for their right to education. Sienes, who is also a member of the progressive youth group Anakbayan, said he and his companions are often being stalked by the guards inside the campus. “Wherever we go in the campus, we are being followed.”

He added that a known student leader in their campus was prevented by the Office of Student Affairs to enroll this second semester. “He was told that he could only enroll if he will not join any demonstration against the administration. He found out that it is only a form of intimidation because when he accessed the online enrollment, he was still able to enroll.”

In UP, Ragasa criticized the approved 2012 code of student conduct, particularly provisions such as: disrespect towards any person, which includes, not limited to insulting, discriminatory and/or threatening behavior; and creating and/ or engaging in disorder, tumult, breach of peace, or serious disturbances such as, but not limited to, rumbles, within the University premises, resulting in harm to persons.

The disrespect provision, said Ragasa was obviously meant for protesters, such as the students and faculty who railed against Department of Budget and Management Florencio Abad in September.

Student Regent Neill John Macuha said they are alarmed by this particular provision of the new approved code of student conduct as this represses the students’ right to freedom of expression. “With the case of the Christian group in Pampanga, there is also a probability that this will be used against students who are discussing about their projects and someone happens to be disturbed because of their noise,” Macuha said during the UP student summit held last Nov. 14.

The students lambasted President Benigno S. Aquino III for letting the youth of the nation be denied of their right to education.

Charlotte Velasco spokeswoman of League of Filipino Students said, “The Filipino youth are beleaguered by state policies that ensure profit-driven interests thriving in social services such as education. It’s under these conditions that we chose to stand in the line of fire and raise the call for Aquino’s ouster.”

Velasco also denounced the government’s budget cut in state universities and colleges prompting school administrators to impose income generating projects. “It is enraging that students are embattled with the long list of fees and soaring tuition rates while capitalist-educators and corrupt officials continue to fatten their pockets.”

Kabataan Rep. Terry Ridon pointed out the importance of the youth’s action to win the struggle against the “other school fees.”

“As we remember how our forebears in the youth and student movement fought with blood, sweat, and tears for the rights that we enjoy today, we challenge youth and students to fight against these ‘interstellar’ school fees. We cannot just stand and watch as schools charge out-of-this world and skyrocketing fees from students.”


Ridon has called on the House Committee on Higher and Technical Education to investigate Ched’s “failure to regulate ‘other school fees’ in public and private higher education institutions.”

In Ridon’s House Resolution No. 1640, the youth representative called on Congress to examine how “other school fees” – or fees collected from students apart from tuition – have remained “completely unregulated” despite the implementation of Ched Memorandum Order No. 3, series of 2012 (CMO 3-2012).

“International Students Day is a testament of the potent power of students to foment genuine change in society,” said Ridon.

“The youth of today should live up to this history of militancy, and continue fighting against anti-student policies such as the continued deregulation and commercialization of education that have led to the creation of such dubious and exorbitant fees.”

He also called on to the youth and students “to stand united to fight the regime that perpetuated this system of education deregulation – the same regime that is now scrambling to cover up its corrupt practices, the same regime which has prided itself for bogus reforms.”

Today, we call on youth and students to rise against the Aquino administration and its moribund policies.”